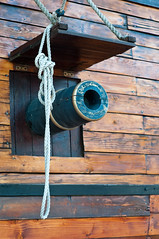 The Spanish Armada was a massive fleet of Spanish ships that sailed against England in 1588. Their intention was to overthrow Protestant Queen Elizabeth I of England and stop English involvement in the Spanish Netherlands and English attacks on Spanish trade and settlements in the New World. The mission of The Spanish Armada was to sail to Gravelines in Flanders and transport the famous “Tercios de Flandes” (an army of over 30,000 men led by the Duke of Parma) across the Channel to invade England. The mission failed due to strategic errors by The Spanish Armada commander, Alonso Pérez de Guzmán, bad weather, and early English attacks, especially during the “Battle of Gravelines”. The failed mission prompted a similar naval expedition by England against Spain with the Norris-Drake Expedition of 1589, sent to occupy Portugal and northwestern Spain, which also ended in defeat. Both campaigns formed part of a nearly twenty year long Anglo-Spanish war (1585–1604).

Felipe II of Spain had been co-monarch of England until the death of his wife Mary I in 1558. A devout Roman Catholic, he considered his Protestant half sister-in-law Elizabeth a heretic and illegitimate ruler of England. He had previously supported plots to have her overthrown in favour of her Catholic cousin, Mary, Queen of Scots, but was thwarted when Elizabeth had Mary imprisoned and finally executed in 1587. In addition, Elizabeth, who sought to advance the cause of Protestantism wherever possible, had supported the Dutch Revolt against Spain. In retaliation, Felipe planned to invade England and overthrow Elizabeth, supported by Pope Sixtus V, who treated the invasion as a crusade, with the promise of a subsidy should the Spanish Armada reach land.

The appointed commander of The Spanish Armada was the highly experienced Álvaro de Bazán, but when he died in February 1588, Alonso Pérez de Guzmán, a high-born courtier with no real sea experience took his place. The fleet set out with 22 Spanish Royal Navy warships and 108 converted merchant vessels and achieved its first goal by anchoring outside Gravelines, at the coastal border area between France and the Spanish Netherlands. While awaiting communications from Parma’s army, it was driven from its anchorage by an English fire ship attack and in the ensuing naval battle at Gravelines the Spanish were forced to abandon their rendezvous with Parma’s army. The Spanish Armada managed to regroup and withdraw north and the English fleet harried it up the east coast of England. A return voyage to Spain was plotted and the fleet sailed north of Scotland into the Atlantic and past Ireland, but severe storms disrupted its course. More than 24 vessels were wrecked on the north and western coasts of Ireland, with the survivors having to seek refuge in Scotland. Of the initial complement, about 50 vessels in The Spanish Armada failed to make it back to Spain.