“The Peninsular War” was a contest between France and the allied powers of Spain, Great Britain and Portugal for control of the Iberian Peninsula during the period of “Napoleonic Wars” following the French Revolution of 1789 when France was rapidly becoming the main power in Europe, thanks largely to the efforts of one Napoleon Bonaparte. The Peninsular War began when French armies crossed Spain and invaded Portugal in 1807 and then later turned on its ally, Spain, in 1808. The war lasted until the Sixth Coalition of Austria, Prussia, Russia, Sweden, Great Britain and a number of German States defeated Napoleon in 1814.

The French occupation of Spain at this time destroyed the Spanish administration, which fragmented into quarrelling provincial juntas. In 1810, a reconstituted national government fortified itself in Cádiz, but proved unable to recruit, train, or equip effective armies. British and Portuguese forces secured Portugal, using it as a secure position from which to launch campaigns against the French army while Spanish guerrillas continually chipped away at the occupiers. French armies were often victorious in battle, but their communications and supplies were severely tested and their units frequently cut off, harassed, or overwhelmed by partisans. The Spanish army, though beaten and driven to the peripheries, could not be stamped out and hounded the French relentlessly. 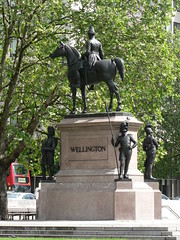 In 1812, with France gravely weakened following Napoleon’s invasion of Russia, a combined allied army under The Duke of Wellington pushed into Spain and liberated Madrid. Exhausted and demoralized French forces withdrew across the Pyrenees and into France during the winter of 1813. War and revolution against Napoleon’s occupation led to the Spanish Constitution of 1812 which became a cornerstone of European liberalism. The burden of war destroyed the social and economic fabric of Portugal and Spain and ushered in an era of social turbulence, political instability and economic stagnation. Devastating civil wars between liberal and absolutist factions, led by officers trained in the Peninsular War, persisted in Iberia until 1850.