Francisco Franco was born in Galicia in 1892 and was a military general who became Spanish head of state after the Spanish Civil War and de facto regent of the nominally restored Kingdom of Spain from 1947 until his death on 20th November 1975. General Francisco Franco took over from Manuel Azaña, the first Prime Minister of the Second Spanish Republic, who after, the defeat of the Republic in 1939, fled to France, resigned his office and died in exile. As head of state, Franco used the title “Caudillo de España, por la gracia de Dios” (“Leader of Spain, by the grace of God”). He was laid to rest in “El valle de los Caídos” (“Valley of the Fallen”), a Catholic basilica and monumental memorial in Cuelgamuros Valley in the Sierra de Guadarrama, just outside of Madrid. This memorial was conceived by Franco himself to honour and bury those who fell during the Spanish Civil War. 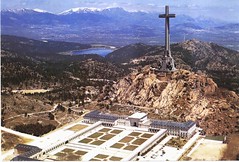 Instability in Spain had heightened following the formation of a “Popular Front” coalition in 1936 with a pact signed by various left-wing political organisations, instigated by Manuel Azaña for the purpose of contesting that year’s election. The Popular Front included the Spanish Socialist Workers’ Party (PSOE), Communist Party of Spain (PCE), the Workers’ Party of Marxist Unification (POUM) and the Republican Left (IR) led by Azaña and Republican Union Party (UR) led by Diego Martínez. This pact was supported by Galician and Catalan nationalists, socialist union Workers’ General Union (UGT), and the anarchist trade union, the Confederación Nacional del Trabajo (CNT). Violence between militant groups spiralled out of control with the assassination of conservative parliamentary leader José Calvo in retaliation for the killing of José Castillo. General Francisco Franco and his co-conspirators used Calvo’s death as their pretext for war, even though they had already initiated the plan for their rebellion.

The 1936 military coup d’état failed and devolved into the Spanish Civil War during which General Francisco Franco emerged as the leader of the Nationalists against the Popular Front government. After winning the civil war with military aid from Italy and Nazi Germany he dissolved the Spanish Parliament and established a right-wing authoritarian regime that lasted until 1978, when a new constitution was drafted. During the Second World War, The Franco Dictatorship officially maintained a policy of neutrality. However, he also supported the “Blue Division”, a unit of Spanish volunteers who served in the German army on the Eastern Front. He permitted volunteers to fight for Germany on the clear and guaranteed condition they would exclusively fight against Soviet Communism on the Eastern Front and not against the Western Allies or any Western European occupied populations. In this manner, Franco could keep Spain at peace with the Western Allies whilst simultaneously repaying Hitler for his support during the Spanish Civil War. 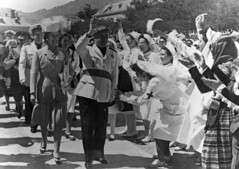 The Franco Dictatorship initially sought support from fascist groups such as the “Falange” (original fascist movement in Spain formed by José Antonio Primo de Rivera in 1933) and, after the end of World War II, maintained its control in Spain through the implementation of severe measures. These measures included the systematic suppression of dissident views through censorship and coercion, the imprisonment of ideological enemies in concentration camps throughout the country (such as “Los Merinales” in Seville, “San Marcos” in León, “Castuera” in Extremadura and “Miranda de Ebro” in Burgos), the implementation of forced labour in prisons and the use of the death penalty and heavy prison sentences as deterrents for his ideological enemies. Miranda de Ebro was the location of the last Nationalist concentration camp in Spain to close down. It remained active until 1947 and during its existence held more than 65,000 prisoners, both Spanish and foreign. Under the Franco Dictatorship, the “Castellano” Spanish language was declared Spain’s only official language and the public use of other languages (for example Catalan and Basque) was banned. Today, pre-constitutional symbols from the Franco Dictatorship regime, such as the national Coat of arms or flag with the Imperial Eagle, are banned by law in Spain.