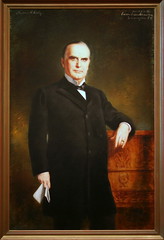 “The Spanish–American War” was a conflict that lasted from April 25th to August 12th, 1898, between Spain and the United States. Revolts against Spanish rule had been endemic for decades in Cuba and American public opinion was growing angry at reports of Spanish atrocities. On the 15th February 1898 the American battleship USS Maine mysteriously exploded and sank in Havana harbour and the Americans blamed the Spanish. The Maine had been sent to Havana to protect U.S. interests in Cuba during the revolt for Cuban independence from Spain. The sinking popularised the phrase “Remember the Maine, to Hell with Spain!”. Republican American President William McKinley wanted to avoid the war, but his ultimatum sent to Madrid was rejected. First Madrid, then Washington, formally declared war and so began the Spanish-American War.

Although the main issue was Cuban independence from Spain, the ten-week Spanish-American War was fought in both the Caribbean and the Pacific. A series of one-sided American naval and military victories followed on all fronts, owing to their numerical superiority in most of the battles and despite the good performance of some of the Spanish infantry units. The outcome was the 1898 Treaty of Paris in favour of the U.S. followed by temporary American control of Cuba and indefinite colonial authority over Puerto Rico, Guam and the Philippines. The defeat and subsequent end of the Spanish Empire was a profound shock for Spain’s national psyche as it lost the rest of its important overseas possessions. The loss and subsequent Cuban independence from Spain became known as simply “The Disaster” and produced debate inside Spain about why they were losing an empire while other European countries were growing theirs. Spain retained only a handful of overseas holdings: Spanish West Africa, Spanish Guinea, Spanish Sahara, Spanish Morocco and the Canary Islands.

Cuba was regarded as a province of Spain rather than a colony, for it had been an integral part of the country for almost four centuries. The island was not only a matter of prestige for Spain it was also one of the most prosperous territories. The trade in the capital city, Havana, was comparable to that registered in the most trade-active Spanish city at that time, Barcelona. Cuban independence from Spain was disaster for the Spanish economy and the political stability of Spain. The USA on the other hand was on the up. The American press showed Northerners and Southerners, blacks and whites, fighting against a common foe, helping to ease the scars left from The American Civil War. The economic depression of 1893 was over by this point and the United States entered a lengthy and prosperous period of economic and population growth and technological innovation.