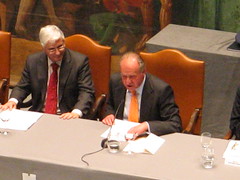 Six years before his death, Franco requested that Prince Juan Carlos de Borbón be his successor and new king of Spain. At this point, the Spanish throne had been vacant for twenty two years. The designation came as a surprise to Juan Carlos, as well as to his father, Don Juan, Count of Barcelona, who technically had a superior right to the throne. By 1973, Franco had surrendered the function of “Presidente del Gobierno” due to ill health, remaining only as head of state and commander in chief of the military. When he died in 1975 he was indeed succeeded two days later by King Juan Carlos I and the new king quickly showed his commitment to a return to democracy and careful negotiation. His sights were set on a modern free society and he allowed a referendum on political reform, followed by a new constitution in 1978. The rapid reforms and dealings with the Left displeased Falangists and Conservatives, especially in the military, who had expected King Juan Carlos to maintain the authoritarian state.

King Juan Carlos I was born in Rome on 5th January 1938, the son of Juan de Borbón (third surviving son and designated heir of King Alfonso XIII of Spain) and Princess María de las Mercedes de Borbón. Alfonso XIII and other members of the Spanish royal family had settled in Italy following the proclamation of the Second Spanish Republic in 1931. Juan Carlos moved to Spain in 1948 to be educated there after his father persuaded Franco to allow it. He began his studies in San Sebastián and finished them in 1954 at the San Isidro Institute in Madrid. He then joined the army, doing his officer training from 1955 to 1957 at the Military Academy of Zaragoza. In 1957 he spent a year in the naval school at Pontevedra, Galicia, and another in the Air Force school in San Javier, Murcia. In 1961 he graduated from the Complutense University, Madrid, and went to live in the Palace of Zarzuela, where he began carrying out official royal engagements. 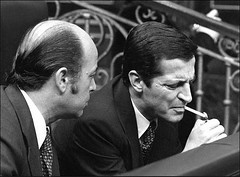 Adolfo Suárez was appointed as the Prime Minister of Spain by King Juan Carlos I on 4th July 1976, a move opposed by leftists and some centrists given his Francoist history. He was a nationalist, but was chosen by the monarch to lead Spain towards a democratic, parliamentary monarchy without annoying the powerful conservative factions in the country. Surprising many observers and political opponents, Prime Minister Suárez introduced Political Reform in 1976 as a first, decisive step in “La Transición”: the return to democracy. In 1977 Suárez led the “Union of the Democratic Centre” (UCD) coalition party to victory in Spain’s first free elections in 41 years and became the first democratically-elected prime minister of the post-Franco regime. Prime Minister Suárez’s centrist government instituted democratic reforms and his coalition won the 1979 elections under the new constitution. The 1978 Spanish Constitution defined Spain as a Social and Democratic State, with constitutional provisions to recognise the right to adequate housing, employment, social welfare provision, health protection and pensions.

An attempted military coup known as “23-F” occurred on 23rd February, 1981, when two hundred armed officers led by Antonio Tejero burst into and seized the General Courts in Madrid during the process of electing Leopoldo Calvo Sotelo to be the country’s new Prime Minister. According to the widely accepted version, the coup was thwarted by the national television broadcast of King Juan Carlos, calling for the maintenance of law and order and the continuance of the democratically elected government. In the hours before his speech, he had personally called many senior military figures to tell them that he was opposed to the coup and that they should defend the democratic government. After holding the Parliament and cabinet hostage for 18 hours the rebels surrendered the next morning without having harmed anyone.