History of Spain: The Spanish Empire

The Spanish Empire consisted of the territories and colonies administered directly by Spain in Europe, the Americas, Africa, Asia or Oceania. At the peak of its power, it was one of the largest empires in world history, comprising The Netherlands, Luxembourg, Belgium, most of Italy, parts of Germany, parts of France, territories in Africa, Asia and Oceania, as well as large areas in North and South America. By the 17th century the Spanish Empire was of a scale and world distribution that had never been approached by its predecessors. It originated during the “Age of Exploration” in the 15th and 16th centuries and was therefore one of the first global empires.

With a newly unified Spain, catholic monarchs Queen Isabella I and King Ferdinand II authorized the expedition of Christopher Columbus which brought knowledge of “The New World” to Europe. Columbus’ first expedition landed on the island of Guanahani in the Bahamas on October 12th 1492, and he named it “San Salvador”. He continued on to Cuba, naming it “Juana”, and finished his journey on the island of Santo Domingo, calling it “La Española”. His second trip began in 1493 and he found more Caribbean islands, including Puerto Rico. His main goal was to colonize the existing discoveries with 1500 men. Columbus finished his last expedition in 1498, discovering Trinidad and the coast of present day Venezuela. By 1500, 6000 Spaniards had emigrated to the “New World”. They were the vanguard of a Spanish empire in South and Central America which overthrew the indigenous peoples and sent vast quantities of treasure back to Spain. When Portugal was subsumed into Spain in 1580, Spain became rulers of the large Portuguese empire too. The colonies Columbus established and his conquests in the Americas in the decades to come would lead to an influx of wealth into Spain, filling the coffers of the new state that would prove to be the hegemony of Europe for the next two centuries. 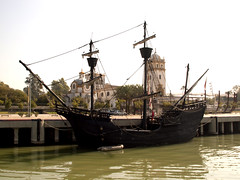 Spanish conquests established a Spanish Empire that stretched from present-day Canada in North America to the southern tip of South America, including the Falklands or Malvinas islands. The Spanish expedition of world circumnavigation started by Ferdinand Magellan in 1519 and completed by Juan Sebastian Elcano in 1522, achieved what Columbus had longed for, a westward route to Asia, and brought the Far East to Spain’s attention, where it established colonies in Guam, the Philippines and surrounding islands. By the early 20th century Spain only held territories in Africa: Spanish Guinea, Spanish Sahara and Spanish Morocco. Spain withdrew from Morocco in 1956, granted independence to Equatorial Guinea in 1968 and abandoned Spanish Sahara in 1976. Today, the Canary Islands and two enclaves on the North African coast, Ceuta, and Melilla, are administrative divisions of Spain.