History of Spain: The Moors

The Moors attacked Spain from North Africa in 711, taking advantage of the collapse of the Christian Visigoth Kingdom and stayed for 800 years. Hispania became part of the caliph of Damascus, which was the capital of the Muslim world, and was renamed “Al-Andalus”. It included all of the Iberian Peninsula, except for small Christian strongholds in the north (in Galicia, Asturias, Cantabria, Catalonia and the Basque Country) with their hero St James (Santiago de Compostela) who went by the name of “Matamoros” (the Moor slayer). The name “Moors” comes from the Latin “Mauri” which was the name of the Berber tribes living in Roman Mauretania (Algeria and Morocco) and is used to refer to all Muslims, Berbers or Arabs, who conquered the Iberian Peninsula. The invaders, the majority of whom were Berbers, brought no women with them so the second generation of Moors were already half Hispanic.

The first 40 ruling years of the Moors in Spain was volatile, but Al-Andalus finally found order and unity in the form of Abd-er-Rahman who arrived in 755. Within a year he became Emir of Al-Andalus and during his 32 year reign transformed the land into an independent state and the cultural light of Europe. He founded the great Mosque in Cordoba in 785 which went on to become the second most important place of worship in the Muslim world after Mecca. Moorish influence shaped Iberia differently from the rest of Europe as the land adapted to a new religion, language and culture. The Moors in Spain expanded and improved Roman irrigation systems to help develop a strong agricultural sector. They introduced many new crops including the orange, lemon, peach, apricot, fig and pomegranate as well as saffron, sugar cane, cotton, silk and rice. By 1200, it is estimated that some 5.6 million of Iberia’s 7 million inhabitants, nearly all native inhabitants, were Muslim. 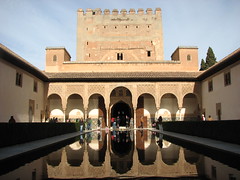 The Christian “Reconquista” (Reconquest) movement born in the north-west gradually gathered momentum and in 1212 a coalition of Christian kings under the leadership of Alfonso VIII of Castile drove the Muslims from Central Iberia. The Portuguese side of the Reconquista ended in 1249 with the conquest of the Algarve under Afonso III, the first Portuguese monarch to claim the title “King of Portugal and the Algarve”. The Moorish Kingdom of Granada continued for three more centuries, but on January 2nd 1492, the leader of the last stronghold of the Moors in Spain surrendered to armies of a recently united Christian Spain (after the marriage of Ferdinand II of Aragon and Isabella I of Castile, the Catholic Monarchs). They forced the remaining Muslims and Jews to leave Spain, convert to Roman Catholic Christianity or be killed. The Spanish Inquisition was introduced, aimed mostly at Jews and Muslims (“Marranos” and “Moriscos”) who had converted to Christianity, but were thought to be practicing their faiths secretly. Many Muslims converted to Christianity and remained permanently in Iberia.