King Amadeo I abdicated the Spanish throne on 10th February 1873. His decision was made mainly due to the constant difficulties he had to face during his short tenure: the Ten Years’ War in Cuba, the outbreak of the Third Carlist War, opposition from monarchists hoping for a Borbón monarchy restoration, numerous republican insurrections and division among his own supporters. The First Republic of Spain followed Amadeo’s abdication, but lasted only eleven months until Brigadier Martínez Campos pronounced for Alfonso, son of the former Queen Isabel, in Sagunto on 29th December 1874 and the rest of the army refused to act against him. The government collapsed, leading to the end of the first republic and the restoration of the Borbón monarchy with the proclamation of Alfonso XII as king. 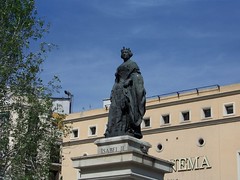 The short lived First Spanish Republic was characterized by profound political and social instability and violence. The First Spanish Republic was governed by four distinct presidents —Estanislao Figueras, Pi i Margall, Nicolás Salmerón, Emilio Castelar — until General Manuel Pavía mounted a coup d’état and established a unified republic led by General Francisco Serrano in 1874. During the eleven months he remained in office Serrano devoted his attention chiefly to the reorganization of finance, the renewal of relations with American and European powers and the suppression of revolt. After Alfonso XII ascended the throne in 1875, Serrano spent some time in France and later returned to Madrid in 1876 to take his seat as a marshal in the senate. He died in November 1885, twenty-four hours after the death of Alfonso XII, who some claim was his own son. Alfonso was the son of Isabella II of Spain, and allegedly, Francis of Assisi de Borbón, her cousin and legal husband at the time of Alfonso’s conception and birth. His legal paternity is certain, but his true biological paternity is debatable. Some suggest his real father was either Enrique Puigmoltó y Mayans, Captain of the Royal Guard, or General Francisco Serrano. 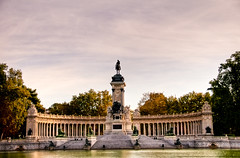 Born in 1857, Alfonso XII was only 17 years old when he became king. Coming to the throne at such an early age, he had served no apprenticeship in the art of ruling, but he possessed great natural tact and a sound judgment ripened by the trials of exile. Benevolent and sympathetic in disposition, he won the affection of his people by fearlessly visiting districts ravaged by cholera or devastated by earthquake in 1885. During his short reign, peace was established both at home and abroad, finances were well regulated, and the various administrative services were placed on a basis that afterwards enabled Spain to pass through the disastrous war with the United States without the threat of a revolution. He died in November 1885, just short of his 28th birthday, from tuberculosis.