History of Spain: The Carlist Wars

“The Carlist Wars” in Spain were the last major European civil wars in which pretenders fought to establish their claim to a throne. Three times during the period from 1833 to 1876 the Carlists — followers of Carlos V — fought for God, King and Country and the cause of Spanish Legitimism and Catholicism against the Liberalism, and later the Republicanism, of the Spanish governments of the day. When King Ferdinand died in 1833 his wife María Cristina de Borbón became Queen Regent on behalf of their three year old daughter Isabella II. The country was split into two factions. On one side were the supporters of the Queen Regent and her government (the “Cristinos” or “Isabelinos”) and on the other were the “Carlists”, supporters of Carlos V.

When Felipe V, the first Spanish King from the French house of Borbón, acceded to the Spanish throne in the Spanish War of Succession, he brought with him “Salic Law” which restricted succession to the throne to the direct male line. However, King Ferdinand VII of Spain had fathered only two daughters, Isabella and Luisa and so he brought forth the “Pragmatic Sanction” of 1830 in order for his oldest daughter to inherit the throne and be declared queen upon his death. This removed his brother, Carlos, as the next in the line of succession under Salic Law. Carlos V, however, denied the validity of the Pragmatic Sanction as he was born before 1830. 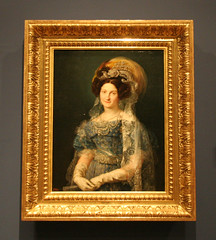 There were three Carlist Wars. The First lasted from 1833 to 1839. The fighting spanned most of the country at one time or another, though the main conflict centered on the Carlist homelands of the Basque Country and Aragon, Catalonia and Valencia. The Second of the Carlist Wars was really only a minor Catalonian uprising, lasting from 1846 to 1849. The Third Carlist War began in the aftermath of Queen Isabella II’s deposition by a conspiracy of liberal generals in 1868. She went into exile and was replaced by Amadeo, the second son of King Victor Emmanuel of Italy. Carlist forces loyal to Carlos VII, grandson of Carlos V, fought for his claim to the throne but after four years of war, on 27th February 1876, he also was forced into exile in France.