Following the 1996 Spanish general election the Spanish conservative Popular Party, led by José María Aznar, formed a new government and brought to an end thirteen years of rule by the Socialist Workers’ Party. As a teenager, José María Aznar was a member of the Frente de Estudiantes Sindicalistas (FES), a Student Union supporting the fascist Falange organisation. After the death of Franco and the restoration of democracy, Aznar joined the Alianza Popular (AP) in January 1979. In 1982 he was elected to Parliament, representing Ávila, and by 1990 Aznar was voted to be the new leader of his party, re-founded as the Partido Popular (PP). PP won the 3rd March 1996 general election with 37.6% of the vote and Aznar was voted in as new Spanish President with 181 votes on 4th May and sworn in the next day by King Juan Carlos I. 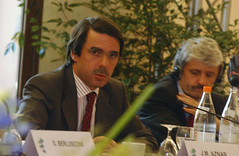 The José María Aznar government maintained the commitment of the previous government to join the European Union’s single “Euro” currency and showed itself willing to take political risks with the Spanish economy in order to meet the requirements for membership. A strict 1997 budget was passed in December, aimed to lower Spain’s deficit to below 3% of gross domestic product, a requirement for joining the EU single currency. The opposition argued that the drastic spending cuts and tax adjustments contained would hurt the disadvantaged and benefit the rich. In 1999 the European Union introduced the Euro and it proved a major success for the José María Aznar government. Steady economic growth and falling unemployment won the government public support. Spanish voters re-elected Aznar in the 2000 general election with an outright majority. PP obtained a resounding 44.5% of the vote and 183 seats.

In 2001 the Spanish economy was one of the fastest growing economies in the European Union, but by 2002 the effects of a global economic downturn were being felt with falling exports, declining domestic consumption and a sharp drop in tourist revenue helping bring the annual gross domestic product growth back down to the lowest level since 1996. In addition, rising crime rates and soaring Spanish housing prices, up almost 50% since 1998, were causing widespread public concern. Other European economies were stagnant, but somehow Aznar kept the Spain’s ball rolling with an estimated GDP growth of 2.3% making the Spanish economy the second fastest-growing economy in the European Union in 2003. Continued expansion enabled the Spanish government to proclaim proudly that it would end the year with a budget surplus for the first time in recent history. However, inflation was running at 2.7% compared with the EU’s 1.7% and unemployment stood at more than 10%, almost one-third of the workforce had temporary contracts and Spanish housing prices were spiralling. The European Commission shared analysts’ concerns that a hike in interest rates or increased unemployment could send Spanish housing prices tumbling, with disastrous consequences for families burdened with unprecedented levels of debt and for the financial institutions that had loaned them. 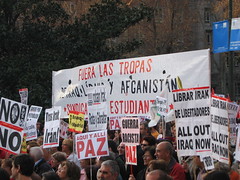 Towards the end of Aznar’s second term in office he actively encouraged and supported the George Bush administration’s foreign policy and the US invasion of Iraq in 2003 and this drew widespread public disapproval. Aznar, like UK Prime Minister Tony Blair, defended his decision on the basis of secret intelligence allegedly containing evidence of the Iraqi government’s nuclear proliferation. Spain’s major cities were the scene of the largest street demonstrations ever seen in the country as a result of the government’s decision to participate in the invasion and Aznar, again like Blair, was seen as one of Bush’s poodles. In a live TV interview aired while demonstrations were taking place on the streets, Aznar asked the Spanish people to take his word of assurance that there definitely were weapons of mass destruction in Iraq, something that is now widely regarded to be incorrect. In January 2004 Aznar called a general election and designated his successor as Mariano Rajoy, sticking to a pledge of not seeking office for a third term.