ETA stands for “Euskadi Ta Askatasuna” which means “Basque Homeland & Freedom” in Basque and is an armed Basque nationalist and separatist organisation. The group was officially founded in 1959 and has since evolved from a group promoting traditional the Basque country culture to a paramilitary group with the goal of gaining independence for the Greater Basque Country. ETA is the main organisation of the Basque National Liberation Movement and is the most important participant in the Basque Conflict. ETA’s symbol is a snake wrapped around an axe: the snake represents politics and the axe represents armed struggle. This theme is continued in ETA’s motto, “Bietan Jarrai”, which means “Keep up on both”. Between 1968 and 2010 ETA killed over 800 individuals, injured thousands and undertook dozens of kidnappings. The group is denounced as a terrorist organisation by the Spanish and French authorities, as well as the European Union as a whole and the United States. More than 700 members of the organization are incarcerated in prisons in Spain, France and other countries. The post-Franco Spanish Constitution of 1978 acknowledged Basque “historical rights” and established the autonomous Basque community of Euskadi, but it was still ultimately governed by the central Spanish government in Madrid.

During the Spanish Civil War nearly all the Basque country nationalist forces sided with the Republic, even though some Basque nationalists in Álava and Navarre fought on the side of Franco and the Spanish nationalists. Following the war, during Franco’s dictatorship (1939-1975), the Basque country language and culture were banned, institutions and political organisations abolished, and people killed, tortured and imprisoned for their political beliefs. Thousands of Basques were forced to go into exile, usually to Latin America or France. ETA began in 1952 as a student discussion group at the University of Deusto in Bilbao, an offshoot of the PNV (Partido Nacionalista Vasco, the oldest Basque nationalist group) youth group EGI. It was originally called EKIN, but on July 31st 1959 it reconstituted itself as ETA. The group split from PNV because they considered the PNV too moderate in its opposition to Franco’s dictatorship. They disagreed with the PNV’s rejection of violent tactics and advocated a Basque resistance movement using direct action. At their first assembly in Bayonne, France, 1962, ETA called for “Historical Regenerationism” and declared that Basque nationality is defined by the Basque language. They called for socialism and independence for Euskadi. In its early years, ETA’s activity consisted mostly of theorising, protesting by destroying infrastructure and Spanish symbols and by hanging forbidden Basque flags. 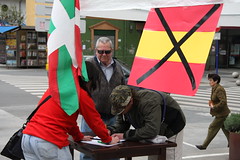 ETA’s first confirmed killing occurred on June 7th 1968 when Guardia Civil, José Pardines Arcay was shot dead as he tried to halt ETA member Txabi Etxebarrieta during the course of a routine road check. Etxebarrieta was chased down and killed as he tried to flee. This led to retaliation in the form of the first planned ETA assassination, that of Melitón Manzanas, chief of the secret police in San Sebastián and associated to a long record of tortures inflicted on detainees under his custody. The most significant assassination performed by ETA during Franco’s dictatorship was “Operación Ogro”, the December 1973 bomb assassination in Madrid of Admiral Luis Carrero Blanco, Franco’s chosen successor as president of the government. The assassination had been planned for months and was executed by placing a bomb in the sewer below the street where Blanco’s car passed every day. The bomb went off and blew the politician and his car three floors into the air and over the top of a nearby building; the car landed on a balcony in a courtyard the other side of the road. The years 1978–80, three years after the death of Franco, were to prove ETA’s most deadly, with 68, 76, and 91 fatalities, respectively.