The Christian Reconquista (“Reconquest”/”Recapturing”) was a period of about 700 years in the Middle Ages during which the Christians succeeded in retaking the Iberian Peninsula from the Moors. The early stages of the Reconquista began almost as soon as the Moors arrived and the movement grew steadily through the centuries. Key developments were the formation of the Kingdom of Asturias and the Battle of Covadonga in 722. Charlemagne (King of West Germanic tribe The Franks) reconquered the western Pyrenees and Septimania in south east France and formed a “Marca Hispánica” barrier to defend the border between France and the Muslims. 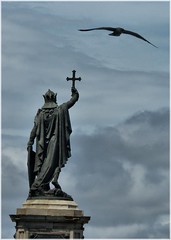 After the advent of the Crusades much of the ideology of Christian Reconquista was subsumed within the wider context of Crusading. Even before the Crusades, however, soldiers from elsewhere in Europe had been traveling to Iberia to participate in the Christian Reconquista as an act of Christian penitence. By 1249 the sole remaining Muslim state in Iberia was the Emirate of Granada ruled by the Nasrid Dynasty. It was agreed that Granada would became a vassal state of the Christian Crown of Castile and this arrangement lasted for 250 years until the Castilians launched the Granada War of 1492, which finally expelled all Muslim authority from Spain. The last Muslim ruler of Granada, Muhammad XII, better known as King Boabdil, surrendered his kingdom to The Catholic Monarchs in 1492. The Granada War was aided by Pope Sixtus IV who implemented a crusade tax to invest in the war.

“The Catholic Monarchs” (“Los Reyes Católicos”) is the collective title used for Queen Isabella I of Castile and King Ferdinand II of Aragon. They were second cousins, being both descended from John I of Castile. The title of “Catholic King and Queen” was bestowed on them by the Pope Alexander VI. They married on October 19, 1469, in the city of Valladolid; Isabella was eighteen years old and Ferdinand a year younger. Their marriage united both crowns under the same family. Together they set out to restore royal authority in Spain. To accomplish their goal, they first created a group named “The Holy Brotherhood”. These men were used as a judicial police force for Spain. To replace the courts, the Catholic Monarchs created the Royal Council, and appointed magistrates to run the towns and cities. This establishment of royal authority is known as “The Pacification of Castile” and can be seen as one of the key moments in the history of Spain and a crucial step toward the creation of one of Europe’s first solid nation-states. 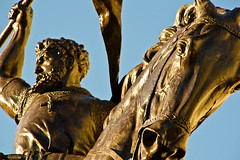 A key figure in the struggle between Christianity and Islam in medieval Spain was Rodrigo Diaz de Vivar, better known as “El Cid”. His name came from the Arabic “As-sid” meaning “The Lord”. El Cid served as the commander of the troops of Sancho II, ruler of Castile from 1065 and became famous for his military prowess in several battles against Sancho’s brother, Alfonso VI, ruler of Léon. When Sancho died in 1072 without an heir, El Cid’s allegiance transferred to the court of Alfonso. El Cid was a popular figure in Castile, but this was not the case in the court of Léon and it wasn’t long before Alfonso became convinced that El Cid was plotting against him. El Cid was exiled in 1081 and found work fighting for the Muslim leaders Al-Muqtadir and Al-Musta’in II. When King Alfonso was threatened by an invasion of the Islamic Almoravid dynasty in 1086, he talked El Cid into fighting for him again. Over the next several years El Cid set his sights on the kingdom-city of Valencia and, after a 20-month siege, conquered Valencia and made it an officially Christian city. After his death, he was immortalized in plays, folk tales and songs and continues to be one of the grandest folk heros in Spanish history.