History of Spain: The Vandals, The Suevi, The Alani & The Visigoths

Roman Hispania finally fell with the great barbarian Germanic migrations of the 4th and 5th centuries AD. The Western Roman Empire had lost a lot of its military strength and political cohesion due to civil war and struggling rival emperors and so numerous Germanic peoples, under pressure from population growth and invading Asian groups, began migrating en masse in far and diverse directions, taking them to Great Britain and south through Continental Europe to the Mediterranean and northern Africa.

The Vandals, The Seuvi and The Alani passed through Southern France and into Galicia and Northern Portugal, effectively removing Hispania from Roman control by about 409 AD. They were quickly followed by The Visigoths, who eventually settled and crushed the last imperial enclaves in the 470s AD, leaving the region under their control. The Visigoths were one of two main branches of the Goths, an East Germanic tribe; the Ostrogoths being the other. The romanised Visigoths first emerged as a distinct people during the 4th century, initially in the Balkans, where they participated in several wars with Rome. A Visigoth army under Alaric I eventually moved into Italy and famously sacked Rome in 410. The Visigoth Kingdom controlled all of Hispania with the exception of the Suevic kingdom in the northwest and small areas stoically controlled by the Basques and Cantabrians. 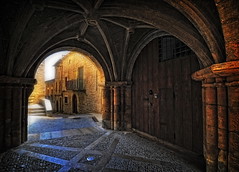 Migrating Germanic peoples spread throughout Europe into the Early Middle Ages. Germanic languages became dominant along the Roman borders (Austria, Germany, Netherlands, Belgium and England), but in the rest of the western Roman provinces, the Germanic immigrants adopted Latin dialects. Furthermore, all Germanic peoples were eventually Christianized to varying extents. Europe’s Germanic peoples, such as the Franks, the Saxons, the Vandals, the Angles, the Lombards, the Burgundians and the Goths, transformed the Roman Empire into Medieval Europe. Today Germanic languages are spoken through much of the world, represented principally by English, German, Dutch and Scandinavian.