History of Spain: The Carthaginians

Carthage in North Africa was founded in 814 BC by the Phoenicians. The Carthaginians were sea traders who brought back copper from Cyprus, horses from Anatolla (part of Turkey), ivory from India and tin and silver from Spain. Cadiz (then known as “Gades”) was their first main trading centre in Spain and in 400 BC they built the defences on the hill above Alicante called “Castell de Santa Barbara”. They played a very important role in the history of Spain. 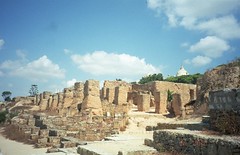 By 241 BC the Carthaginians started to focus their attention on Spain and began a campaign of conquest and settlement. In 237 BC Carthage invaded and captured the Iberian Peninsula. A capital for Carthage in Spain was established at Cartagena on the south east coast by Hasdrubal the son-in-law of Hamilcar and brother-in-law of Hannibal. The campaign continued under Hannibal who pushed further north, but came to blows with the Romans who were increasingly uneasy about the increasing expansion and strength of Carthage in Spain. In 219 BC Hannibal attacked and laid siege to the city of Seguntum (Segunto) and the Roman Senate reacted angrily, declaring Hispania to be a Roman province. By 214 BC the Romans had advanced and recaptured Seguntum.

Carthage plays a key role in Roman history. The Carthaginians were the first great imperial opponent of Rome and they took the Romans to the very brink of defeat. The fierce battles between the two powers helped forge the Romans into the supreme fighting force in the Mediterranean. A key turning point was the Second Punic War (218-206 BC) which saw the Romans, led by General Scipio Africanus, outthink and over-power the Carthaginians. Carthage was finally thrown out of Spain in 206 BC after “The Battle of Zama”, beginning 600 years of Roman occupation. 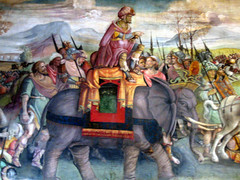 Carthaginian military leader Hannibal (248–183 BC) is popularly credited as one of the most talented commanders and tacticians in history. Who hasn’t heard of his triumphant elephant crossing of the Alps to surprise and beat the Romans? Military historian Theodore Ayrault Dodge famously called Hannibal the “father of strategy” because his greatest enemy, Rome, came to adopt elements of his military tactics in its own strategic arsenal. He conquered major portions of Spain and France and all of Italy, except for Rome. He was constantly pursued by Rome and as a statesman of Carthage he finally took his own life, rather than surrender to Rome.