The Roman conquest of Hispania (Spain and Portugal) began mainly due to the actions of the Carthaginians who were growing alarmingly powerful in the Mediterranean. After the First Punic War (264-241 BC) the Romans had defeated Carthage and claimed Sicily, Sardinia, and Corsica. This deprived Carthage of a large source of its wealth and manpower and as a result Carthage placed an increased emphasis on Hispania. Carthaginian leader, Hannibal, was a constant thorn in the side of the Romans until Carthage was finally ejected out of Spain after the Second Punic War in 206 BC. So began 600 years of Roman occupation in Spain. 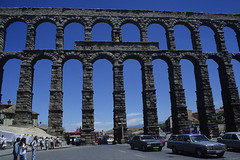 Roman Hispania, however, was not uncontested. After the war Rome divided Spain into two provinces, known as Hispania Citerior and Hispania Ulterior. Both provinces were rich in silver and other precious metals and their governors did not hesitate to extort extra wealth from the local inhabitants. This led to numerous bloody uprisings by the native tribes of the region. For the next 185 years Spain was an almost constant battleground. The Lusitani and Celtiberians who lived on the west coast and central plains began raiding Roman Hispania in the 160s BC and continued to resist Roman attempts to pacify them until 133 BC. The Lusitani tribe revolted again in 61 BC only to be defeated by Julius Caesar. The final conquest of Hispania was accomplished between the years 39 and 19 BC and in 13 BC Roman Hispania was divided into three provinces: Baetica (Andalucia), Lusitania (Portugal), and Tarraconensis (Tarragona, Catalonia).

Hispania was significantly romanised throughout the imperial period and it came to be one of the most important territories of the Roman Empire. Hispania’s economy expanded greatly under the Romans. The harbours exported gold, wool, olive oil, and wine and agricultural production increased with the introduction of irrigation projects, some of which remain in use even today. Grapes and olives were cultivated and silver mining within the Guadalquivir River valley became an integral part of Iberian society. Some of the Roman Empire’s most important metal resources were in Hispania, including gold, silver, iron, tin, copper and lead. Many great Spanish cities were built by the Romans during their rule, including La-Coruña, Mérida, Segovia, Sevilla, Tarragona and Zaragoza. This building program left some of the most impressive Roman ruins in the world outside Italy. Spain also gave much to the Roman Empire. Great Emperors Trajan and Hadrian were both born there.