Segovia is a city in central Spain, just north of Madrid, and is the capital of the province of Segovia in Castile and Leon. It can be reached by bullet train in 35 minutes from Madrid. Segovia is a Celtic name. Under Roman and Moorish rule, the city was called “Segovia” and “Šiqūbiyyah” respectively. Segovia province is bordered by the provinces of Burgos, Soria, Guadalajara, Madrid, Ávila and Valladolid. 35% of the province’s population live in the capital, Segovia. Of the 209 municipalities in the province, more than half are villages with less than 200 people.
The old part of Segovia is spectacularly situated on top of a long, narrow promontory. It contains numerous interesting monuments, including the cathedral, a famous ancient Roman aqueduct, the Alcázar Castle and various churches built in the Romanesque style including San Esteban, San Martín and San Millán. This is old part is surrounded by walls that were built in the 8th century AD and rebuilt extensively during the 21st Century. The area has been designated as a UNESCO World Heritage Site.
The Segovia climate is continental Mediterranean. This means it is generally cold and dry, resulting from the high altitude, its proximity to the central system and its distance from the coast. The average annual temperature is 12º C, with a minimum in December of -14º C and a maximum in July of 34º C. The annual precipitation is 520 mm. The predominant vegetation is black pine, stone pine, Scotch pine, oak, beech, broom and juniper, oak, with landscapes of wheat, stubble and fallowing.
Photo by Alaskan Dude
Hispania was the Roman name for the Iberian Peninsula. Under the Republic, Hispania was divided into two provinces: Hispania Citerior and Hispania Ulterior. Substituting “Spain” for Hispania, though sometimes done by historians, can be misleading, since the borders of modern Spain do not coincide with those of the Roman province of Hispania, or of the Visigothic Kingdom which succeeded it. Although the Latin term Hispania was often used during Antiquity and the High Middle Ages as a geographical name for the Iberian Peninsula, “Spain” and “Spanish” have become increasingly associated with the Kingdom of Spain alone, after its formation in the 15th century under the Catholic Kings.
Roman armies invaded Hispania in 218 BC and used it as a training ground for officers and as a proving ground for tactics during campaigns against the Carthaginians, the Iberians, the Lusitanians, the Gallaecians and other Celts. It was not until 19 BC that the Roman emperor Augustus was able to complete the conquest. Until then, much of Hispania remained autonomous. Romanization proceeded quickly after the time of Augustus and Hispania was initially divided into three separately governed provinces. Hispania was for 500 years part of a cosmopolitan world empire bound together by law, language, and the Roman road. Many of the peninsula’s population were admitted into the Roman aristocratic class and they participated in governing Hispania and the Roman Empire.
The Romans improved existing cities, such as Lisbon and Tarragona, established Zaragoza, Mérida and Valencia and provided amenities throughout the empire. The peninsula’s economy expanded under Roman tutelage. Hispania served as a granary and a major source of metals for the Roman market and its harbours exported gold, tin, silver, lead, wool, wheat, olive oil, wine, fish, and garum. Agricultural production increased with the introduction of irrigation projects, some of which remain in use today. The Romanized Iberian populations and the Iberian-born descendants of Roman soldiers and colonists had all achieved the status of full Roman citizenship by the end of the 1st century. The emperors Trajan, Hadrian and Marcus Aurelius were all born in Hispania. 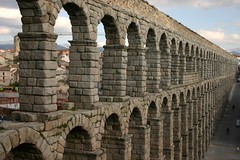 The Aqueduct of Segovia is the most widely recognized and famous symbol of Segovia and also features on the city’s coat of arms. It was built at the end of the 1st century AD by the Romans during their occupation of the Iberian Peninsula to bring water from the Río Frío about 18 km away to Segovia city. This required an elevated section in its last kilometre from the Sierra de Guadarrama to the walls of the old town. This elevated section is supported by 167 arches and 120 pillars on two levels. It is made of 20,400 large, rough-hewn granite blocks, joined without mortar or clamps. At its maximum height it measures 28.5 metres. It is one of the best-preserved monuments left by the Romans on the Iberian Peninsula.
When the water arrives at Segovia it is first gathered in a tank known as El Caserón (“Big House”) and is then led through a channel to a second tower known as Casa de Aguas (“Water House”) where it is naturally decanted. Next the water travels 728 meters until it reaches the high part of the old town. Then, at Plaza de Díaz Sanz, the structure makes an abrupt turn and heads toward Plaza Azoguejo. It is there that the monument is at its tallest. The construction of the aqueduct follows the principles laid out by Roman architect, writer and engineer, Marcus Vitruvius Pollio, as described in his “De Architectura” published in the mid-first century.
The aqueduct is Segovia’s most important architectural landmark. It had been kept functioning throughout the centuries and preserved in excellent condition. It provided water to Segovia, mainly to the Segovia Alcázar, until recently. During the 20th Century, the aqueduct suffered wear and tear due to pollution and natural erosion of the granite. Contrary to popular belief, vibrations caused by traffic do not affect the aqueduct due to its great mass. Restoration projects, supervised by architect Francisco Jurado, have been ongoing since 1997 in order to guarantee the aqueduct’s survival. During the restoration, traffic has been re-routed and Plaza Azoguejo has been converted into a pedestrian zone.
Photo by Alaskan Dude 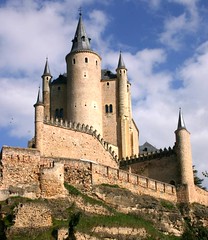 The Alcázar Castle of Segovia was originally an Arab fort. At the end of the 11th century it was conquered by King Alfonso VI and during the Middle Ages was the favourite residence of the Kings of Castile and almost each king added new parts to the building, transforming the original fortress into a courtier residence and prolonging the construction of the castle into the 16th century, when King Philip II added the conical spires and the slate roofs. It is one of the most distinctive castle-palaces in Spain by virtue of its shape that resembles the bow of a ship. As well as serving as a royal palace it has also been a state prison, a royal artillery college and a military academy since then.
Archaeological evidence suggests that the site of the Segovian Alcázar was also once used in Roman times as a fortification. This theory is further substantiated by the presence of Segovia’s famous Roman Aqueduct. Prior to the reign of King Alfonso VIII (1155-1214) it was no more than a wooden fort built over the old Roman foundations. Alfonso VIII and his wife, Eleanor of Plantagenet made it their principal residence and much work was carried out to erect the beginnings of the impressive stone fortification we can see today.
Now, the Alcázar is one of the most popular historical monuments in Spain and one of the three major attractions in Segovia. Notable rooms are the Hall of Ajimeces which houses many works of art, the Hall of the Throne and the Hall of Kings with a frieze representing all of the Spanish Kings and Queens starting from Pelagius of Asturias down to Juana la Loca. A fire in 1862 destroyed part of the roof, but it was authentically restored in the same style.
Photo by Alaskan Dude 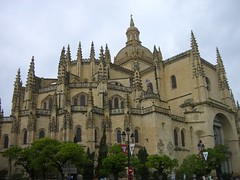 The Cathedral of Segovia is situated in the city’s central square, Plaza Mayor. It was constructed by architect Juan Gil de Hontañon in the late Gothic style between 1522 and 1577 and is called the “Dame of the Spanish Cathedrals” (“La dama de las catedrales españolas”). It is dedicated to the Virgin Mary and replaced another building that had been damaged in the “War of the Communities of Castile” (“Guerra de las Comunidades de Castilla”) between 1520 and 1521.
Juan Gil de Hontañón started the work that was continued by his son Rodrigo Gil de Hontañón. Juan Gil de Hontañón (1480 –1526) was a master builder and Trasmeran mason of Spain during the 16th century. He was involved in the building of the Isabelline Gothic Segovia Cathedral, the castle of Turégano, various monasteries and the Cathedral of Palencia. In Salamanca, he was involved in the construction of the new cathedral in 1512 and in 1513 worked on the Cathedral of Seville until 1516. He then worked in Segovia again, as well as in Zamora and Granada.
The Cathedral of Segovia is one of the last Gothic cathedrals of Spain and Europe, built in the sixteenth century when most of Europe was spreading Renaissance architecture. The interior has a remarkable unity of style, except the dome built around 1630, and looks stunning. Gothic vaults rise to 33 meters high and measure 50 meters wide and 105 long. The great dome was completed by Pedro de Brizuela in the seventeenth century. The mighty tower reaches almost 90 metres. The current stone spire crowning the tower, dates from 1614, erected after a major fire caused by a thunderstorm. The original spire, entirely Gothic, was built of American mahogany, had pyramidal structure and was the tallest tower in Spain.
Photo by guillermoen flickr