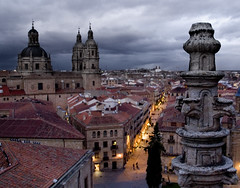 Salamanca is located in western Spain and is the capital of the province of Salamanca, which belongs to the autonomous community of Castile and Leon. Salamanca province is bordered by the provinces of Zamora, Valladolid, Ávila, and Cáceres and also by Portugal. It lies about 200 km west of Madrid and 100 km east of the Portuguese border. The Old Salamanca City was declared a UNESCO World Heritage Site in 1988.
Salamanca is well known both for its monuments and the University of Salamanca, which was founded in 1218 and is the oldest university in Spain and the fifth oldest western university. The university is, together with tourism, the economic engine of the city. In 2002 Salamanca shared the title of European Capital of Culture with Bruges. Salamanca is a very popular tourist destination, especially in the summer. Salamanca is also known for the teaching of the Spanish language and this attracts thousands of foreign students.
Salamanca’s climate is Continental Mediterranean, with cold winters and hot summers softened by the altitude and dry throughout the year. Salamanca was the setting for the 2008 political thriller Vantage Point, although the movie was almost exclusively filmed in Mexico. Salamanca offers the amenities of a larger city while retaining an intimate small town atmosphere. A traditional local celebration is “Lunes de Aguas” (“Water Monday”), held on the Monday after the Sunday following Easter. Originally this served to celebrate the official allowance of the authorities for the prostitutes to return to the city after Lent and Easter. All the shops close and people picnic in the countryside, eating various foods including a kind of pie called “Hornazo”.
Photo by kurtxio
Salamanca was founded pre-Ancient Rome by a Celtic tribe called the “Vacceos”, as one of a pair of forts to defend their territory near the Duero river. In the third century BCE, Hannibal laid siege to the city and then later with the fall of the Carthaginians to the Romans, the city of “Helmantica”, as Salamanca was then known, began to take more importance as a commercial hub in Roman Hispania due to its favourable location. With the fall of the Roman Empire, came first the Sarmatian Alans, the Visigoths and then the Moors.
Salamanca surrendered to the Moors, led by Musa bin Nusair, in 712 CE. For years this area between the south of the Duero River and the north of the Tormes River was the main battlefield against the Muslim invaders. The constant fighting of the Kingdom of León first, and the Kingdom of Castile and León later against the Caliphate depopulated Salamanca and reduced it to a small and insignificant settlement. After the battle of Simancas in 939 CE the Christians resettled in the area. With the capture of Toledo by Alfonso VI of Castile in 1085, the definitive resettlement of the city took place. Ramón de Borgoña, instructed by his father-in-law Alfonso VI of León, led a group of settlers of various origins in 1102.
One of the most important moments in Salamanca’s history was the year 1218, when Alfonso IX of León created the University of Salamanca. Soon it became one of the most significant and prestigious academic centres in Europe. Also, during the Peninsular War of the Napoleonic campaigns, the Battle of Salamanca, fought on July 22, 1812, is famous as a defining moment in military history. Many thousands of men were slaughtered by cannon fire in the space of only a few short hours as an Anglo-Hispano-Portuguese army under the Duke of Wellington defeated Marshal Auguste Marmont’s French forces in the hills around Arapiles, south of Salamanca. 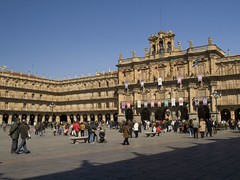 Salamanca is considered one of the most spectacular Renaissance cities in Europe. Through the centuries its sandstone buildings have gained an exquisite golden glow that has given Salamanca the nickname “La Ciudad Dorada” (“The Golden City”). This golden glow is unique in Spain and is due to the type of sandstone from a quarry situated in a village close to Salamanca called Villamayor.
The Plaza Mayor is the main square in the city and was constructed by Andrés García de Quiñones at the beginning of the 18th century. The plaza has a capacity of 20,000 people and is surrounded by shaded arcades. The plaza was originally a venue for bullfights and is regarded as one of the finest squares in Europe. Next to it is the Central Market of Salamanca. The old Romanesque cathedral was founded in the 12th century and the adjoining “new” cathedral was built in stages from 1509 and combines Late Gothic architecture, particularly in the interior, with the Renaissance style called Plateresque. In the treasury is the bronze crucifix that was carried into battle before El Cid. Salamanca also has many very interesting museums, including the Art Nouveau and Art Decó Museum “Casa Lis”.
Since 1996 Salamanca has been the designated site of the archive of the Spanish Civil War: “Archivo General de la Guerra Civil Española”. This archive was assembled by the Francoist regime, obtained from the administrative departments of various institutions and organisations during the Spanish Civil War as a repressive instrument used against opposition groups and individuals. The Socialist government moved the Catalan part of the archive to Barcelona in 2006 despite opposition from the local authorities and popular protests. Salamanca’s mayor, Julian Lanzarote changed the name of the street where the archive is located from “Gibraltar” to “El Expolio” (“The Plundering”) in February 2006.
Photo by rahego 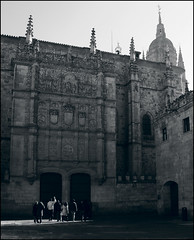 In 1218, Alfonso IX of León founded the University of Salamanca. Under the patronage of the learned Alfonso X between 1252 and 1282, its wealth and reputation greatly increased and its schools of canon law and civil law attracted students from far and wide, including the universities of Paris and Bologna. In the 16th century, one in five of Salamanca’s residents were a student and the city’s fortunes depended on those of the university.
Around the time that Christopher Columbus was lecturing at the university on his voyages and discoveries, Hernán Cortés took classes at Salamanca, but returned home in 1501 at age 17, without completing his course of study. Hernán Cortés (1485 – 1547) was a Spanish conquistador who led an expedition that caused the fall of the Aztec Empire and brought large portions of mainland Mexico under the King of Castile in the early 16th century. Cortés was part of the generation of Spanish colonizers that began the first phase of the Spanish colonization of the Americas. It was scholars of Salamanca University, heavily influenced by the Paris-based Scottish philosopher John Mair, who established in Spanish law the right to life and liberty of the indigenous peoples of America at the Council of Burgos, 1512. This was perhaps the first ever international statement of human rights.
Miguel de Unamuno was a student at the university as was Miguel de Cervantes. St. John of the Cross also studied at Salamanca and so did the poet and writer Mateo Aleman. Many people continue to come from all parts of Spain to study at the University, and the students represent a significant percentage of the city’s population. The support of the student population is one of the most important economic activities in the city. These young people provide Salamanca with a highly active night life, especially when school is in session on both weekdays and weekends. This has led Salamanca to be in the top list of cities with the highest bar per inhabitant ratios in Europe.
Photo by mekanoide 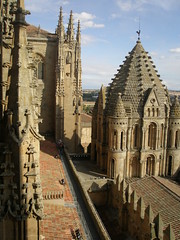 “La Catedral Nueva” (The New Cathedral) of Salamanca is located very near to the Old Cathedral and was constructed in two styles: late Gothic and Baroque. Building began in 1513 and the cathedral was consecrated in 1733. It was commissioned by Ferdinand V of Castile of Spain and was declared a national monument by royal decree in 1887. The building began at a time when the Gothic style was becoming less popular and was merging with the new Renaissance style. However, this cathedral retained more of its Gothic character because the authorities wanted the new cathedral to blend with the old one. However, during the 18th century, two elements were added that broke with the predominant style of the building: a Baroque cupola on the transept and the final parts of the bell tower.
The New Cathedral was constructed without the subsequent destruction of the Old Cathedral as normally happened. A wall of the New Cathedral leans on the North wall of the old one. For this reason, the old cathedral had to be reinforced, and the bell tower was constructed on the old one. Two of the main architects of the cathedral were J. Gil de Hontañón and his son Rodrigo. Its main entrance consists of 3 richly carved arcs, each leading to the 3 naves of the church. Among the ornate carvings on the façade is the incongruous likeness of an astronaut floating in space; it was added by an artist during restoration work in 1992 as a symbol of the 20th century.
Cracks and the broken windows are visible reminders of the devastating effects of the Lisbon Earthquake that occurred on November 1, 1755. After the earthquake, repairs were necessary to the cupola and the base of the tower which were reinforced. The moment of this catastrophe is commemorated with the “Mariquelo” tradition on October 31, when every year residents climb high up to the cupola and play flutes and drums. Around 1950, it was decided that the cathedral organ had to be tuned. A Belgian specialist was called, who remained astonished to find out that despite nearly a century without attention, it was still in perfect tune, which was attributed to the dry climate of the area.