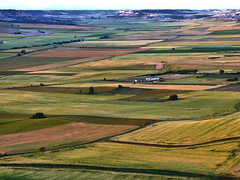 Palencia is a city in north-northwest Spain and the capital of the province of Palencia in the northern part of the autonomous community of Castile-Leon. It is bordered by the provinces of León, Cantabria, Burgos and Valladolid. Nearly 50 % of the Palencia province’s population lives in the capital, Palencia. There are 191 municipalities in the province, of which more than half are villages with fewer than 200 people.
Interesting sights to see in the city include the old medieval bridge across the Carrión River that replaced the original Roman Bridge and the old city walls that were more than 10 metres high and can still be traced. The old part of the city is on the left bank of the river and the modern suburban development is on the right bank. It seems likely that the first Palencia inhabitants settled on the right bank and later moved to the left bank because it is set in higher ground and the area was prone to frequent floods.
Palencia has a wonderful Gothic Cathedral that was built from 1321 to 1504 and is dedicated to San Antolín (Catedral de San Antolín en Palencia). It stands over a low vaulted Visigothic crypt and its museum contains a number of important works of art. Palencia is also famous for the 13th-century church of San Miguel, the San Francisco church and the Benedictine monastery of San Zoilo, housed in an 18th-century rococo structure by Juan de Badajoz. La Calle Mayor (the main street) is pedestrianised and the location of many excellent examples of 18th, 19th and early 20th century architecture.
Photo by alfonso benayas
The fortified Celtiberian settlement, was rendered as Pallantia by the Romans, a version possibly of the Celtic root “Pala” (“Plain”) and incorporated into the Roman province of “Hispania Tarraconensis” in the second century BCE. Though the little Roman garrison city was an active mint, it was insignificant compared to the Roman villas of Late Antiquity in the surrounding territory. Archeologists have uncovered the remains of Roman villas at La Olmeda and at the Quintanilla de la Cueza where the fragments of mosaic floors are spectacularly refined.
According to the fifth-century Galician chronicler Idatius, the city of Palencia was all but destroyed in the Visigothic wars against the “Suebi”. The Suebi or Suevi were a group of Germanic peoples who were first mentioned by Julius Caesar in connection with Ariovistus’ campaign in approximately 58 BC. Ariovistus was defeated by Caesar, but some Suebi remained a periodic threat against the Romans on the Rhine, until, toward the end of the empire, the Alamanni, including elements of Suebi, brushed aside Roman defenses and occupied Alsace and from there Bavaria and Switzerland. Except for a pocket in Swabia, and migrants to Gallaecia (modern Galicia), no more was heard of the Suebi.
When the Moors arrived in the early eighth century, resistance was fragmented among bishops in control of small walled towns and the territorial magnates in their fortified villas. A concerted resistance seems to have been ineffective and the fragmented system crumbled villa by villa. Palencia was relatively insignificant to the Moors and Moorish writers only once cite the border city in the division of the provinces previous to the Ummayyad Dynasty. The Umayyad Caliphate was the second of the four Islamic caliphates established after the death of Muhammad. It was ruled by the Umayyad Dynasty, whose name derives from Umayya ibn Abd Shams, the great-grandfather of the first Umayyad caliph. Although the Umayyad family originally came from the city of Mecca, Damascus was the capital of their Caliphate. Eventually, they would become the 6th largest contiguous empire to ever exist. 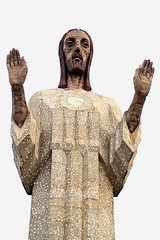 Palencia lies in the northern sector of the central Spanish plateau, in the middle of the Carrión River Valley, near the confluence with the Pisuerga River. The river passes through the city and creates four islands, the Dos Aguas Island and the Sotillo Island being the largest ones. The Pisuerga River is the River Duero’s second largest tributary. It springs on the southern slopes of the Cordillera Cantábrica and flows south into the Douro River shortly after passing through the city of Valladolid. Its length is approximately 270 km.
Since the 1950s the water level of the river has been very regular throughout the year due to the huge Aguilar de Campóo dam which collects all the water from the river’s rainy upper valleys. This regulation has allowed the creation of vast extensions of irrigated farmland along the Pisuerga’s course across the northern Castilian plain. Two hills surround Palencia city on its north-east area. On the nearest one stands the huge Jesus Christ statue known as “El Cristo del Otero” which is said to be the second biggest Jesus Christ statue in the world after that of Rio de Janeiro. Palencia also has a huge forest called “Monte el Viejo” (“Old Mount”) that is well frequented by locals.
The region of Palencia has a Continental Mediterranean climate with very cool winters, due to altitude and isolation from maritime influences, chilly winds, including sporadic snowfalls and minimum temperatures usually below 0 °C. Fogs are frequent because of the Carrion River. Summer tends to be warm and pleasant with temperatures that consistently surpass 25 °C in July. Due to Palencia’s altitude and dry climate, nightly temperatures tend to be cooler, leading to a lower average in the summer months. Precipitation levels are low, but precipitation can be observed all year around. Summer and winter are the driest seasons, with most rainfall occurring in autumn and spring.
Photo by alfonso benayas
The University of Palencia was founded by Alfonso VIII in 1208 at the request of Bishop Tello Téllez de Meneses and was the first university of Spain. It was the model upon which was patterned the University of Salamanca. The king summoned from France and Italy noted teachers of various arts and sciences, retaining them in Palencia on large salaries. Study began to flourish in Palencia and men notable for their virtue and science came from its schools, among them Saint Julian of Cuenca, Saint Dominic, and Saint Peter González Telmo; hence the adage: “En Palencia armas y ciencia” (In Palencia arms and science). Saint Dominic, the founder of the Dominican Order, regarded Palencia as his Alma Mater, having been mentored there by Don Diego d’Azevedo.
The death of the founder in 1214, the minority of Henry I, and the growth of its fortunate rival, Salamanca, caused the decay of Palencia, many of whose professors and students were drawn away to Salamanca. In 1243 Archbishop Rodrigo records that in spite of unpropitious events, study continued in Palencia and that the cardinal legate, Juan de Abbeville, in a Council of Valladolid (1228) had endeavoured to revive it. Bishop Fernando obtained an agreement to grant the professors and students of Palencia all the privileges of the University of Paris. However, lack of financial support and the proximity of the prosperous University of Salamanca made a revival of Palencia impossible, and it died out before the end of the thirteenth century, probably in 1264, at which time the university was transferred to Valladolid.
The University of Salamanca in central-western Spain was founded as a “General School of the Kingdom” by the Leonese king Alfonso IX in 1218 to allow the Leonese people to study at home without having to leave for Castile. The historical latin phrases “Quod natura non dat, Salamantica non praestat” (what nature does not give, Salamanca does not lend) and “Multos et doctissimos Salmantica habet” (many and very versed Salamanca has) give an idea of the prestige the institution rapidly acquired. While Columbus was lobbying the King and Queen for a contract to seek out a western route to the Indies, he made his case to a council of geographers at the University of Salamanca. In the next century, the morality of colonisation in the Indies was debated by the School of Salamanca, along with questions of economics, philosophy and theology.

The main speciality dish of Palencia is “Lechazo” (baby lamb that has only drunk its mother’s milk). The Lechazo is slowly roasted in a wood oven and served with salad. “Menestra de verduras” is also very popular and is a tasty mix of vegetables cooked with small pieces of Spanish ham, onion, garlic and spices. Palencia is also a fine producer of wines. The ones that fall under the Designation of Origin Arlanza are becoming very popular and are similar in taste and quality to those of Ribera del Duero and Toro.
Palencia also offers a great assortment of lettuces, leeks, wild mushrooms, peppers, asparagus, endives and beans. Some legumes, such as white beans and lentils are particularly good and regularly cooked in hot dishes with chorizo. “Sopa de ajo” (dried bread mixed with paprika, water and garlic and slowly cooked for hours) is a perfect remedy for cold winter days. Morcilla is a pigs-blood sausage that is spiced with onions and herbs, a staple country food famous across the Iberian Peninsula. In Palencia, the most famous Morcilla is the “Fuenteadrino’s Morcilla”, that includes pine kernels.
Despite being an inland province, fish is quite commonly consumed in Palencia. Brought in from the Cantabrian Sea, fish like red bream and hake are a major part of the local cuisine. Rivers from the Cantabric Mountains bring the famous trout, grilled with bacon, and crayfishes, which are cooked with a thick tomato and onion sauce. Palencia has a bread to go with every dish, like the delicious fabiolas, roscas or panes. The pastries and baked goods from the province of Palencia are well-known. Rice pudding and “Leche Frita” (a mix of milk, sugar, flour and cinnamon with a delicious and jelly-like texture) are favourite desserts.
Photo by procsilas