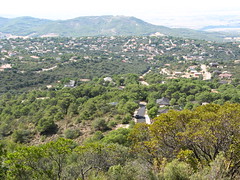 Guadalajara is a city in the autonomous community of Castile-La Mancha and the capital of the province of Guadalajara in north-central Spain which is bordered by the provinces of Cuenca, Madrid, Segovia, Soria, Zaragoza, and Teruel. The area of the province covers 12.190 km² and nearly 35% of the province’s population lives in Guadalajara. There are 288 municipalities in Guadalajara, of which more than three-quarters are villages with populations less than 200.
Guadalajara is about 60 km northeast of Madrid on the Henares River. It is located in the natural region of La Alcarria which extends principally over the province of Guadalajara but also enters those of Cuenca and Madrid. Its principle attractions are its fauna and flora, and it is noted for its honey and a special breed of lamb. La Alcarria is a kind of plateau brought out by the rising of the Sistema Ibérico.
Guadalajara is twinned with the Mexican city of the same name which was founded by Nuño Beltrán de Guzmán, a native of the Spanish Guadalajara. The name originated from the Arabic “Wād al-Haŷara” meaning “Valley of Stones”; the literal translation of the Iberian name “Arriaca”, meaning “Stony River”. The Mexican Guadalajara is the capital city of the Mexican state of Jalisco and is located in the central region of the state and in the western-Pacific area of Mexico. It is Mexico’s second most populous municipality behind Mexico City and is situated at an altitude of 1,600 metres.
Photo by M.Peinado
There are references in texts to a pre-Roman town called “Arriaca” that was incorporated into the Roman province of Hispania Tarraconensis. The city was on the high road from Emerita (modern Mérida) to Caesaraugusta (modern Zaragoza). The town of “Guadalajara” was founded by the Moors in the 8th century who named it “Wadi-al-Hajara”. The history of the town during the Muslim period was significant. They built great monuments including the Moorish Bridge over the River Henares, the Alcazar and the mosque.
In 1085, Guadalajara was taken by the Christian forces of Alfonso VI, King of Leon and Castile. The Christian army was led by Alvar Fanez de Minaya who, according to legend, was the nephew of El Cid. From 1085 until the Battle of Las Navas de Tolosa in 1212, the city suffered wars against the Almoravid and the Almohad Empires. In spite of these wars, the new Christian population established itself in the area with a repopulation of people from the North: Castilians from the mountains and Merindades, Basques and Navarreses mainly. During the reign of Alfonso X of Castile, the protection of the king allowed the city to develop its economy by protecting merchants and allowing markets.
During the 14th century, the Mendoza family was prominent in Guadalajara. This family included Íñigo López de Mendoza (1398-1458), also known as Marqués de Santillana, and Pedro González de Mendoza (1428-1495), Great Cardinal of Spain and adviser of the Catholic Monarchs. The Mendoza Family ordered the building of “El Palacio del Infantado” as their main residence. It was completed in the early 1480s and it is considered by many the oldest surviving building built in a pure Renissance style outside Italy. In 1460, King Henry IV gave Guadalajara the title of ‘City’ and other privileges. 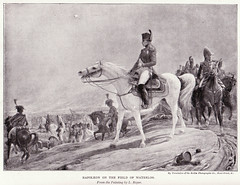 The Peninsular War (1808-1814) was a contest between France and the allied powers of Spain, the United Kingdom, and Portugal for control of the Iberian Peninsula during the Napoleonic Wars. Guadalajara was taken by the French Army led by General Hugo in 1808. The war began when French armies invaded Portugal in 1807 and Spain in 1808 and lasted until the Sixth Coalition defeated Napoleon in 1814. The burden of war destroyed the social and economic fabric of Portugal and Spain and ushered in an era of social turbulence, political instability and economic stagnation. Devastating civil wars between liberal and absolutist factions, led by officers trained in the Peninsular War, persisted in Iberia until 1850.
Spain’s liberation struggle marked one of the first national wars and the emergence of large-scale guerrillas. While the French occupation destroyed the Spanish administration, which fragmented into quarrelling provincial juntas and proved unable to recruit, train, or equip effective armies, Napoleon’s failure to pacify the people of Spain allowed Spanish, British and Portuguese forces to secure Portugal and engage French forces on the frontiers while Spanish guerrillas bled the occupiers. Acting in concert, regular and irregular allied forces prevented Napoleon’s marshals from subduing the rebellious Spanish provinces.
Years of fighting in Spain gradually wore down Napoleon’s famous Grande Armée. While the French armies were often victorious in battle, their communications and supplies were severely tested and their units frequently cut off, harassed, or overwhelmed by partisans. The Spanish army, though beaten and driven to the peripheries, could not be stamped out and continued to hound the French remorselessly. In 1812, with France gravely weakened following Napoleon’s invasion of Russia, a combined allied army under Arthur Wellesley pushed into Spain and liberated Madrid. Marshal Soult led the exhausted and demoralized French forces in a fighting withdrawal across the Pyrenees and into France over the winter of 1813.
Photo by perpetualplum
The Battle of Guadalajara (March 8 – March 23, 1937) saw the Spanish Popular Army (Ejército Popular Republicano, or EPR) defeat Italian and Nationalist forces attempting to encircle Madrid during the Spanish Civil War. The Nationalist forces involved in the Battle of Guadalajara were primarily the Italian Corps of Volunteer Troops (Corpo Truppe Volontarie, or CTV).
The Battle of Guadalajara was the last major Republican victory and did much to lift morale. Strategically, the Republican victory prevented the encirclement of Madrid, ending Franco’s hopes of crushing the Republic with a decisive strike at its capital. On German advice, Franco decided to adopt a new strategy of chipping away at the Republican territories, starting in the north. More than anything, Guadalajara was a severe blow to Italian morale and a personal loss of prestige for Italian dictator Benito Mussolini, who had personally orchestrated the deployment of the Italian army at Guadalajara in order to benefit from the glory of a successful offensive.
It did, though, guarantee continuing Italian involvement as Mussolini sought another victory to counter his defeat at Guadalajara. The Italians lost some 6,000 men (Spanish Nationalist losses were marginal) and a considerable number of light tanks and planes. In addition, the Republican army captured sizeable quantities of badly needed material and equipment. The disappointing performance of Italian arms reached its nadir at Guadalajara.
Antonio Buero Vallejo (September 29, 1916 – April 29, 2000) was a Spanish playwright born in Guadalajara and considered the most important Spanish dramatist of the Spanish Civil War. During his career he won three National Theatre Prizes (1957, 1958 & 1959), a National Theatre Prize for his career in 1980, the National Literature Prize in 1996, and the Miguel de Cervantes Prize, Spain’s highest literary honour, in 1986. From 1971 until his death he was a member of the Real Academia Española.
From 1934 to 1936 Vallejo studied art and painting at San Fernando Escuela de Arte, in Madrid. During the civil war, he served as a medical aid in the Republican army. After the war he was imprisoned for six years. After being released he wrote “Story of a Stairway” in 1949. This work presented a graphic picture of Spain after the Civil War and won the Lope de Vega Prize, establishing Vallejo as one of the foremost authors in Spain. While other authors left Spain to escape Franco’s censorship, Vallejo stayed in Spain and used symbolism to criticise the government. In 1971, he was elected to the Royal Spanish Academy. In 1994 he was awarded the Gold Medal of Merit in Fine Arts and the Gold Medal of the Society of Authors of Spain.
A common theme in his work is Spain’s problems during and after Franco. In the tragedies there is always a sense of hope for the future. His works make frequent use of the symbolism of the senses—for example, the “fiery darkness” in which the protagonist cannot see, as a symbol of Spain’s dark situation. His later works included: “Lázaro en el laberinto” (1986), “Música cercana” (1989), “Las trampas del azar” (1994) and “Misión al pueblo desierto” (1999).