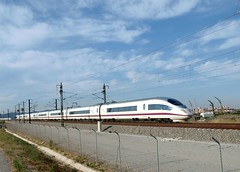 Ciudad Real is a city in Castile-La Mancha and the capital of the province of Ciudad Real. “Ciudad Real” literally means “Royal City” in Spanish. It is located in the south western part of the autonomous community of Castile-La Mancha and is bordered by the provinces of Cuenca, Albacete, Jaén, Córdoba, Badajoz, and Toledo.
Ciudad Real Central Airport is a modern high capacity airport that serves the city. It also has a stop on the AVE high-speed rail line and has begun to grow as a long-distance commuter suburb of Madrid. “Alta Velocidad Española” (AVE) is a service of high speed trains operating at speeds of up to 300 km/h (186 mph) on dedicated track in Spain. The name is literally translated as “Spanish High Speed”, but is also a play on the word “Ave”, meaning “Bird”.
Unlike the rest of the Spanish broad-gauge network, the AVE uses standard gauge, permitting direct connections outside Spain in the future. All AVE trains are currently operated by RENFE, the Spanish state railway company, although it is possible that private companies may be allowed to run lines in the future. On the line from Madrid to Seville, the service guarantees arrival within five minutes of the advertised time, and offers a full refund if the train is delayed further. In this regard, the punctuality of the AVE is exceptional compared to other non long distance RENFE services. On other AVE lines, this punctuality promise is more lax (15 minutes on the Barcelona line).
Photo by Ventura2
Ciudad Real city was founded by Alfonso X in 1255 to fight against the Military Order of Calatrava. The Order of Calatrava was the first military order founded in Castile, but the second to receive papal approval. The papal bull confirming the Order of Calatrava as a Militia was given by Pope Alexander III on September 26, 1164.
Alfonso X of Castile (23 November 1221 – 4 April 1284) was a Castilian monarch who ruled as the King of Castile, León and Galicia from 1252 until his death. He also was elected King of the Germans (formally King of the Romans) in 1257, though the Papacy prevented his confirmation. He established Castilian as a language of higher learning, founded universities such as the University of Toledo and earned the nicknames “El Sabio” (“the Wise” or “the Learned”) and “El Astrólogo” (“the Astrologer”) through his own prolific writings, including Galician-Portuguese poetry.
During the middle ages, four kilometres of walls and one hundred and thirty towers protected a population made up of Christians, Moors and Jews. Nowadays, there are only two parts of the wall left in Ciudad Real. In 1212, a coalition of Christian kings under the leadership of Alfonso VIII of Castile drove the Muslims from Central Iberia. However, the Moorish Kingdom of Granada continued for three more centuries in the southern Iberia. Spanish Jews once constituted one of the largest and most prosperous Jewish communities under Muslim and Christian rule in Spain, before they were expelled in 1492. Jews were subject to expulsions from England, France, and the Holy Roman Empire after 1300, with most of the population moving to Eastern Europe and especially Poland, which was uniquely tolerant of the Jews through the 1700s.
After the unification of the Iberian kingdoms under the Catholic Monarchs (Los Reyes Católicos), Ciudad Real became the capital of the province of La Mancha in 1691. The Catholic Monarchs is the collective title used for Queen Isabella I of Castile and King Ferdinand II of Aragon. The title of “Catholic King and Queen” was bestowed on them by the Pope Alexander VI. They married on October 19, 1469, in the city of Valladolid and their marriage united both kingdoms. Their initial goals were to restore royal authority in Spain and to complete the Christian Reconquest of the Iberian Peninsula and conquer the Muslim kingdom of Granada. Ferdinand and Isabella were noted for being the monarchs of the newly-united Spain at the dawn of the modern era.
After 10 years of many battles the Granada War finally ended in 1492 when the Emir Boabdil surrendered the keys of the Alhambra Palace to the Castilian soldiers. Ferdinand and Isabella also oversaw the expulsion of the Moors and the Jews from Spain. Between 1480 and 1492 hundreds of “Conversos” (Jews or Moors that had converted to Catholicism) were arrested, imprisoned, interrogated or burned in both Castile and Aragon. Finally, in 1492, the Jews in Spain were given four months by the monarchs to either convert completely to Catholicism or leave Spain. Tens of thousands departed to other lands such as Portugal, North Africa, Italy and the Ottoman Empire. Later in 1492, Ferdinand had issued a letter addressed to the Jews who had left Castile and Aragon, to invite them back to Spain if and only if they were Christians.
Ferdinand and Isabella also authorized the expedition of Christopher Columbus which brought knowledge of the New World to Europe. Columbus’ first expedition to the supposed Indies actually landed in the Bahamas on October 12, 1492. He landed on the island of Guanahani and called it San Salvador. He continued to Cuba, naming it Juana, and finished his journey on the island of Santo Domingo, calling it La Española. The colonies Columbus established and the conquests in the Americas lead to an influx of wealth into Spain, filling the coffers of the new state that would prove to be the dominant power in Europe for the next two centuries.

Interesting places to visit whilst in Ciudad Real include the Don Quixote Museum situated next to Parque de Gasset and The Museo Elisa Cendreros. The Iglesia de Santiago is the oldest church in Ciudad Real. It was built at the end of the 13th century in the Gothic style. It has three blocks divided into two parts and is decorated with gothic paintings and seven-headed dragons that were used as amulets protecting against bad spirits. The ceiling is decorated with stones forming eight pointed stars.
Another important church in Ciudad Real is Iglesia de San Pedro. It was built between the 14th and 15th centuries. Its style is also Gothic and inside is the tomb of Chante de Coca, confessor and chaplain of the Catholic Monarchs. One of the most popular festivals in the city is “La Pandorga”, which takes place July 30th and 31st. On the last day of the month the festival honours its patroness “La Virgen del Prado” and the usual attire consists of jeans, a white shirt and traditional handkerchief.
Tablas de Daimiel National Park (“Parque Nacional de las Tablas de Daimiel”) is a nature reserve in the province of Ciudad Real. It is a wetland in an arid part of Spain. The European Union has designated it a Special Protection Area for birds (“Zona de Especial Protección para las Aves”). It is the smallest of Spain’s fourteen national parks, covering an area of 19.28 km². It is a floodplain wetland created where the Gigüela river joins the Guadiana river and is home to numerous bird species, some year-round residents, some migratory. The park is the last surviving example of floodplain wetlands located in the arid central part of the Iberian Peninsula.
Photo by pablo.sanchez 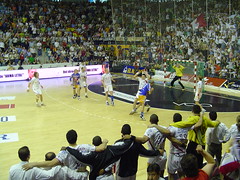 Handball is a very popular sport in Spain and Ciudad Real has one of the best handball teams in the world, BM Ciudad Real. Balonmano Ciudad Real was the winner of the handball EHF Champions League in 2006, 2008 and 2009. Its hall, the Don Quixote Arena, is one of the biggest in the Spanish professional league. It holds 5,200 people and was opened in 2002. They won the 2009 EHF Champions League by beating THW Kiel in the final. The score was 67:66 on aggregate.
A handball club named Asociación Deportiva Cultural Caserío Vigón was founded in July of 1983 in Ciudad Real. In 1993, another Ciudad Real based team, Asociación Deportiva Cultural Ciudad Real, purchased the rights of ADC Caserío Vigón and renamed the team “Balonmano Ciudad Real”. Famous players have included Jordi Núñez, Santiago Urdiales, Angel Hermida, Javier Valenzuela, Xabier Mikel Rekondo, Talant Dujshebaev, Mirza Džomba and Ólafur Stefánsson.
Handball is a sport in which two teams of seven players pass and bounce a ball to throw it into the goal of the opposing team. The team with the most goals after two periods of 30 minutes wins. Modern handball is usually played indoors, but outdoors variants exist in the form of field handball and beach handball. American handball is a completely different sport. The game is quite fast and includes body contact as the defenders try to stop the attackers from approaching the goal. Goals are scored quite frequently; usually both teams score at least 20 goals each and it is not uncommon to have a match end 33-31.
Photo by Ramón Peco
The Spanish Blog