The city of Burgos is located in north eastern Spain, at the edge of the central plateau, and is the capital of the province of Burgos, in the autonomous community of Castile and Léon. It is bordered by the provinces of Palencia, Cantabria, Vizcaya, Álava, La Rioja, Soria, Segovia, and Valladolid. The province has an area of 14,300 km² and nearly half of the population lives in the capital. The only large towns apart from Burgos are Miranda de Ebro and Aranda de Duero. Many of the province’s 371 municipalities have fewer than 100 inhabitants.
The most important rivers in the province are Ebro and Duero. The river Duero is in the south of the province and around it there is one of the country’s best vineyards the ‘Ribera de Duero’. The north and south-east are mountainous. The most populous cities along the Duero River are Valladolid and Zamora in Spain and Porto and Vila Nova de Gaia in Portugal. The latter two are located at the mouth of the Duero, which is the third largest river in the Iberian Peninsula. The Tagus River is the largest in the Iberian Peninsula followed by the Ebro.
The Celtiberian region that became Burgos was inhabited by the Morgobos, Turmodigos, Berones and the principal cities included Brabum, Sisara, Deobrigula, Ambisna Segiasamon and Verovesca. In Roman times it belonged to Hispania Citerior and then to Hispania Tarraconensis. In the fifth century the Visigoths drove back the Suevi, and then the Arabs occupied all of Castile in the eighth century, although for only a brief period. Alfonso III the King of León reconquered it in the middle of the ninth century and built many castles for the defence of Christendom. The region came to be known as Castile: “Land of Castles”. In the eleventh century its city Burgos became the capital of the Kingdom of Castile.
Photo by A. www.viajar24h.com

Sites around Burgos have been occupied by humans for about 800,000 years. The region came to be known as Castile (“The Land of Castles”) in the mid ninth century due to the large number of castles that were built in defence of Christendom by Alfonso III. Burgos was founded in 884 as an outpost of the expanding Christian frontier. The Count of Castile governed the territory with orders to promote the increase of the Christian population and so gathered the inhabitants of the surrounding country into one fortified village, whose Visigothic name of Burgos signified consolidated walled villages.
In the eleventh century the city became the capital of the Kingdom of Castile. Burgos was a major stop for pilgrims on their way to Santiago de Compostela and a centre of trade between the Bay of Biscay and the south, which attracted an unusually large foreign merchant population. Throughout the thirteenth and fourteenth centuries Burgos was a favourite seat of the kings of León and Castile and a favoured burial site.
Burgos has been the scene of many wars: with the Moors, the struggles between León and Navarre, and between Castile and Aragon and during the Peninsular War against Napoleonic France. The Peninsular War was a contest between France and the allied powers of Spain, the United Kingdom, and Portugal for control of the Iberian Peninsula during the Napoleonic Wars. The war began when French armies invaded Portugal in 1807 and Spain in 1808 and lasted until the Sixth Coalition defeated Napoleon in 1814. Burgos was also the scene of a battle in the 19th century Carlist civil wars of the Spanish succession. During the Spanish Civil War Burgos was the base of General Franco’s rebel Nationalist government.
Photo by sedoglia 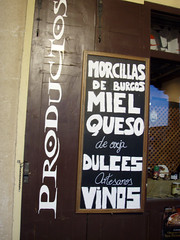 Burgos province is famous for Queso de Burgos, a soft and unctuous white cheese. Although originally made with sheep’s milk, now cow’s milk or mixtures are more common. Each rural district of Burgos produces a variation of the cheese and the major dairies produce an industrial product that is acceptable for people with sensitive digestion. Burgos is blessed with a moderate climate that allowed this fresh cheese to conserve there without the need for curing for more than 10 days, due to the improvement of aseptic industrial production processes this can be been extended to about 30 days at a cool 6°C. Its production reaches 35,000 tons annually.
Queso blanco (white cheese), along with other similar cheeses including Queso Fresco (fresh cheese), is a creamy, soft, and mild un-aged white cheese that originated in Spain and spread to Mexico and other American countries. It is sometimes made by pressing the whey from cottage cheese, but more often is it made by heating whole fresh milk to near-boiling, adding an acidifying agent such as vinegar, stirring until curds form, then draining the curds in cheesecloth for three to five hours. If it is pressed, and more water is removed, it becomes known as Queso Seco (dry cheese). It is similar to pot cheese and farmer cheese and has also been compared to Indian Paneer and to a mild feta. It is considered one of the easiest cheeses to make, as it requires no careful handling and does not call for rennet or a bacterial culture.
Morcilla de Burgos is a pigs-blood sausage that is famous all across the Iberian Peninsula. Spiced with onions and herbs its most noticeable content is rice. This is often mistaken for fat and makes it one of the lightest and healthiest products of its kind. Morcilla is made soon after the animal is butchered with pig’s blood and fat, rice, paprika, onion and salt. It’s a popular “racion” found in most traditional tapas bars throughout Spain. It is an important ingredient of Fabada, which is a stew from Austurias and is usually present in the famous Cocido Madrileño.
Photo by Daquella manera 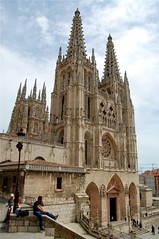 Burgos has numerous ancient and fascinating churches and convents. The three most notable are the cathedral, with its chapel of the Condestables de Castilla, the monastery of Las Huelgas, and the Carthusian monastery of Miraflores. In addition, there are the collegiate churches of Lerma, Villadiego, Pampliega, Palenzuela and Covarrubias. Minor notable churches include San Esteban, San Gil, San Pedro, San Cosme y San Damian, Santiago, San Lorenzo and San Lesmes. Convento de la Merced and the Hospital del Rey are also of historic and architectural interest. It is also worth seeing the old walls of the city and the famous gateway of Santa María, erected for the first entrance of the Emperor Charles V.
Construction of the gothic Cathedral at Burgos began in 1221 and continued until the 15th century. The west front is flanked by towers terminating in octagonal spires covered with open stonework traceries. The middle section has three alabaster pilasters, the inter-columnar spaces bearing panel-pictures representing the martyrdom of saints. The octagonal chapel of the Condestable, in highly sculpted, gothic design, has a roof finished with balustraded turrets, needle-pointed pinnacles, and statues. In the lower portion, coats of arms, shields, and crouching lions have been worked into the ensemble. The exterior of the sacristy is decorated with carved traceries, figures of angels and armoured knights. The elaborate tabernacle is composed of two octagonal sections in the Corinthian style. This wonderful cathedral has been declared a World Heritage Site.
The Monasterio de las Huelgas Reales on the outskirts of the city, was founded in 1180 by King Alfonso VIII and was begun in a pre-Gothic style, although almost every style has since been introduced over the years. The remarkable cloisters are truly beautiful in detail and design. The interior of the church has enormous columns supporting its magnificent vault. This convent historically benefited from extraordinary privileges granted to its abbess by kings and popes. The Carthusian monastery of Miraflores is situated about four kilometres from the historic city centre. Among the treasures of the Charterhouse are the wooden statue of St. Bruno; the wooden choir stalls in the church; and the mausoleum of King John II and of his wife Isabel, constructed from marble and with their alabaster recumbent effigies.
Photo by riverac 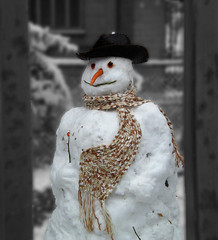