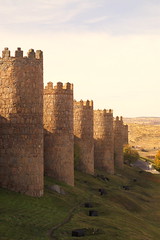 Ávila is located in central-western Spain and is the capital of the province of the same name. It is 1117 metres above sea level, making it the highest provincial capital in Spain. It is built on the flat summit of a rocky hill, which rises abruptly in a brown, treeless, arid wilderness that is strewn with immense grey boulders and shut in by lofty mountains. Ávila’s unique location creates an extreme climate, with very long and hard winters and short summers.
Ávila province is part of the autonomous community of Castile and León and is bordered on the south by the provinces of Toledo and Cáceres, on the west by Salamanca, on the north by Valladolid and on the east by Segovia and Madrid. It is naturally divided into two sections that differ completely in soil and climate. The northern portion is generally level, the climate alternates from severe cold in winter to extreme heat in summer and the population is mainly agricultural. The southern division experiences long and severe winters and is one mass of rugged granitic sierras, interspersed with sheltered and well-watered valleys that abound with rich vegetation.
The principal mountain chains are the Guadarrama that separate Ávila province from Madrid, the Paramera and Sierra de Ávila west of the Guadarrama and the vast wall of the Sierra de Gredos along the southern frontier, where the highest peaks rise to 6000 or even 8000 feet. Pico Almanzor is the highest point. The ridges of the Paramera are covered with valuable forests of beeches, oaks and firs, presenting a striking contrast to the bare peaks of the Sierra de Gredos. The principal rivers are the Alberche and Tiétar that belong to the basin of the Tagus and the Tórmes, Trabáncos and Adaja that belong to that of the Douro. The mountains contain silver, copper, iron, lead and coal, but their mineral wealth is small.
Photo by cesarastudillo 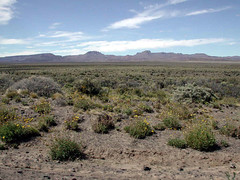 The Meseta Central, or Inner Plateau, is a vast plateau in the heart of peninsular Spain with elevations that range from 610 to 760 metres. West of Madrid in Ávila, the Sistema Central shows its highest peak, Pico Almanzor, of 2,592 metres. The mountains of the Sistema Central, which continue westward into Portugal, display some glacial features; the highest of the peaks are snow-capped for most of the year. Despite their height, however, the mountain system does not create a major barrier between the northern and the southern portions of the Meseta Central because several passes permit road and railroad transportation to the northwest and the northeast.
The Sistema Central is described as the dorsal spine of the Meseta Central and divides it into northern and southern subregions, the former higher in elevation and smaller in area than the latter. The Sistema Central rims the capital city of Madrid with peaks that rise to 2,400 metres north of the city. The southern portion of the Meseta is further divided by twin mountain ranges, the Montes de Toledo running to the east and the Sierra de Guadalupe, to the west. Their peaks do not rise much higher than 1,500 metres. These two mountain ranges are separated from the Sistema Central to the north by the longest river in the Iberian Peninsula: the Tagus River.
Contrary to popular belief, the highest Spanish peak is not in the Pyrenees, but Pico del Teide on Tenerife, in the Canary Islands. Mount Teide is also the third largest volcano in the world from its base. It is an active volcano which last erupted in 1909 from the El Chinyero vent on the Santiago rift. The volcano and its surroundings comprise the Teide National Park (Parque Nacional del Teide) which has an area of 18900 hectares and was named a World Heritage Site by UNESCO on June 29, 2007. It is named as one of the Twelve Treasures of Spain.
Photo by Gobierno del Chubut 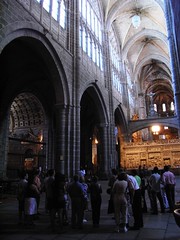 Ávila is well known for its medieval city walls that were constructed of brown granite in 1090. With eighty-eight towers and nine gateways, they are still in excellent repair, but a large part of the city lies beyond their perimeter. The city’s gothic cathedral is integrated into the city’s defences. It was built between the 12th and 14th centuries, and has the appearance of a fortress, with embattled walls and two solid towers. It contains many interesting sculptures and paintings and one especially fine silver pyx, the work of Juán de Arfe, dating from 1571.
The churches of San Vicente, San Pedro and San Segundo are, in their main features, Romanesque dating back to the 12th century. The Gothic Monastery of Santo Tomás, erected by the Catholic Queen Isabella in 1482, is especially noteworthy for the marble monument, carved by the 15th-century Florentine sculptor Domenico Fancelli, over the tomb of Prince John, the only son of Ferdinand and Isabella.
Romanesque architecture is an architectural style of Medieval Europe, characterised by semi-circular arches. Although there is no consensus for the beginning date of the style, examples can be found across the continent, making Romanesque architecture the first pan-European architectural style since Imperial Roman Architecture. Gothic architecture is a style of architecture that flourished during the high and late medieval period. It evolved from Romanesque architecture and was succeeded by Renaissance architecture. Originating in 12th-century France it was known during the period as “the French Style”. Its characteristic features include the pointed arch, the ribbed vault and the flying buttress. Gothic architecture is most familiar as the architecture of many of the great cathedrals, abbeys and parish churches of Europe. It is also the architecture of many castles, palaces, town halls, guild halls and universities.
Photo by jlastras
Old Castile or “Castilla la Vieja” as it is known in Spanish, is a historic region of Spain, which included territory of Ávila, Santander (now Cantabria), Burgos, Logroño (now La Rioja), Soria, Segovia, Valladolid and Palencia. Its origins are in the historic Castile that was formed in the 9th century in the zone now comprised by Cantabria, Álava, and Burgos. In the 18th century, Charles III of Spain assigned to the so-called kingdom of Castilla la Vieja the provinces of Burgos, Soria, Segovia, Ávila, Valladolid, and Palencia.
The royal decree of 30 November 1833 (The Reform of Javier de Burgos) established the basis for the division of Spain into provinces that, with a few modifications, continues to the present day. This decree added the provinces of Logroño and Santander to Castilla la Vieja. Another royal decree, on 30 November 1855, divided Spain into 49 provinces, and assigned the provinces of Valladolid and Palencia to the Kingdom of León, leaving Castilla la Vieja only Santander, Burgos, Soria, Segovia, and Ávila.
With the establishment of the autonomous community of Castile and León in 1983, Castilla la Vieja lost a large portion of its separate identity. On the one hand, it was integrated politically with León into a larger entity, and on the other hand, two of its provinces became autonomous communities in their own right: Santander became Cantabria and Logroño became La Rioja. 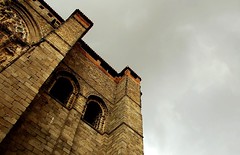 The Cathedral of Ávila was planned as a cathedral-fortress and its apse is one of the turrets of the city walls. It is surrounded by a number of houses or palaces, the most important being the Palace of the Evening, the Palace of the Infant King, the Palace of Valderrábanos, which were responsible for the defence of the Puerta de los Leales (“The Gate of the Loyal Ones”) also known as La Puerta del Peso de la Harina (“The Flour Road Gate”).
It is not known exactly when the construction of the Cathedral began. There are two theories. One theory states that Alvar Garcia started its construction in 1091 on the remains of the Church of the Saviour, which was in ruins as a result of successive Muslim attacks and that Alfonso VI of Castile raised the necessary money required to build it. Other historians believe the Cathedral to be the work of the maestro Fruchel in the twelfth century coinciding with the repopulation of Castille lead by Raimundo of Borgña.
Of the thirteenth century are the first stages of the towers and aisles and of the fourteenth century the second stage of the towers, the cloister, the vaults and the flying buttresses. In the fifteenth century the cathedral was complete and in 1475 Juan Guas built the mechanical clock.
The Cathedral of Ávila is considered to be the first gothic cathedral of Spain. It shows French influences and certain resemblances to the Abbey Church of St Denis which was the first gothic church.
Photo by bachmont