Zamora is a city in Castile and León and the capital of the province of Zamora. It is located on a rocky hill in the northwest of Spain near the border with Portugal, and is crossed by the Duero River. With its twenty four Romanesque churches of the twelfth and thirteenth centuries it is a wonderful museum of Romanesque art. Zamora is in fact the city with the most Romanesque churches in all of Europe.
Zamora was originally a Moorish settlement, and during the fighting between Christians and Moors it was the scene of many fierce engagements, that are reflected in the Spanish national epic, the “Cantar de mio Cid”. The city’s name comes from the Gothic “Semura” or from the Arab “Azemur” and “Semurah”. However, the city was originally founded by the Romans, under the name of “Occelum Durii” or “Ocellodurum” (Duero Eye), in the days when the Lusitanian hero Viriathus fought the Roman invasion.
Zamora has maintained a strong medieval feel and is sprinkled with numerous attractive buildings to admire as you stroll around, including many churches, a cathedral and a castle. There are also numerous fine museums which focus on different aspects of the culture and history of Zamora. The scene of both Moor and Christian invasions, Zamora is home to an eclectic culture which is especially apparent in the delicious cuisine, characteristic of the region. It has a continental Mediterranean climate, with cold winters and hot summers. Precipitation is mainly recorded in two seasons, spring and autumn, with summer characterised by droughts.
Photo by jonaycp
The most notable episode in Zamora’s history was the assassination outside the city walls of King Sancho II of Castile in 1072. Some decades before, King Ferdinand I of León had divided his kingdoms between his three sons. To his daughter, Doña Urraca, he had bequeathed the “well fortified city of Zamora”. All his three sons warred among themselves until finally the ultimate winner, Sancho, was left victorious. His sister ruled Zamora in alliance with Leonese nobles and resisted many threats. Eventually however, Sancho, assisted by El Cid, lay siege to Zamora. King Sancho II of Castille was murdered by a duplicitous noble of Zamora, Bellido Dolfos, who tricked the King into a private meeting. After the death of Sancho, Castile reverted to his deposed brother Alfonso VI of León. The event was commemorated by the Portillo de la Traición (Treason Gate).
Rodrigo Díaz de Vivar (1040 – 1099), known as “El Cid Campeador”, was a Castilian nobleman, a military leader and diplomat who, after being exiled, conquered and governed the city of Valencia. He was born in Burgos and educated in the royal court of Castile. He became the “Alférez”, or chief general, of Alfonso VI, and his most valuable asset in the fight against the Moors. The name “El Cid” comes from the Spanish article El, and the Arabic word “Sîdi” or “Sayyid”, which means “Lord”. The title “Campeador” comes from “Campidoctor”, a medieval Latin word roughly meaning “Master of military arts”, so El Cid Campeador translates as “The Lord, Master of military arts”. He is considered a national hero of Spain.
Zamora was also the scene of fierce fighting in the fifteenth century, during the conflict between the supporters of the Catholic Queen Isabella and Juana la Beltraneja. The Spanish proverb, “No se ganó Zamora en una hora” means “Zamora wasn’t won in an hour” and is a reference to these battles. It is the Spanish equivalent of the English proverb “Rome wasn’t built in a day.” During the twelfth century, Zamora was extraordinarily important for its strategic position in the wars between the Kingdom of León and the Arabs trying to conquer the Iberian Peninsula. The city preserves many churches and buildings from that time. 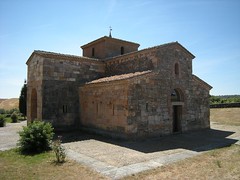 The Visigothic church of San Pedro de la Nave (“St Peter of the Ship”) is located in the town of Campillo in the province of Zamora. It was declared a national monument on April 22, 1912. The church foundation goes back to the reign of Ergica in the seventh century. It was built before the Muslim conquest of Hispania in 711 and is thus one of the last works of Visigothic architecture. Originally the church was located on the banks of the river Esla, but when the Ricobayo dam was built it was moved to avoid submersion in the higher waters of the Esla. It was decided that the church would be moved stone by stone to its current location in 1930-32, under the direction of the architect Alejandro Ferrant Vázquez.
The Visigoths were one of two main branches of the Goths, an East Germanic tribe. The Ostrogoths were the other. Together these tribes were among the barbarians who disturbed the late Roman Empire during the Migration Period. The Visigoths first emerged as a distinct people during the fourth century, initially in the Balkans, where they participated in several wars with Rome. A Visigothic army under Alaric I moved into Italy and famously sacked Rome in 410. Eventually the Visigoths were settled in southern Gaul as Foederati of the Romans, but they soon fell out with their hosts and established their own kingdom with its capital at Toulouse. They then slowly extended their authority into Hispania, displacing the Vandals and Alans.
The decoration of the church is among the most outstanding of Visigothic architecture. There are two types of elements, deriving from different artistic conceptions and different craftsmen: first, a wide frieze corresponding to a course of the Ashlar masonry, which shows a successions of circles with various vegetal and animal motives; second, the capitals of the engaged columns. These are of an excellent workmanship superior to that of the frieze. They show biblical scenes such as Daniel in the Lion’s Den or The Sacrifice of Isaac. Their abacus blocks are decorated with volutes containing human and animal figures. There is also a clock inscribed on a stone in the interior wall of the church. The clock was never finished, but remains one of the marvels of this Visigothic church.
Photo by FreeCat 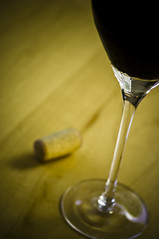 Staple ingredients in a typical Zamoran menu include wonderful pulses, the famous chickpeas (“Garbanzos”) from Fuentesauco, exquisite cheese made from sheep´s milk, honey from Sanabria, asparagus from Guareña, peppers from Benavente and steak from Aliste. The local mushrooms, game, cold meats, cakes and sweets are also of the highest quality. Rustic roasts and rice dishes are very popular.
Traditional dishes include “Bacalao a la trance” (a cod dish), “Pulpo a la sanabresa” (an octopus dish), “Dos y pingada” (two fried eggs with fried ham, usually served in Easter) and ‘”Presas de ternera” (a veal dish). For dessert there is the “Rebojo Zamorano” (a very tasty hard type of bun) and “Natillas almendradas” (custard with almonds).
A good meal in Zamora should be accompanied by a “Toro” wine. Toro is a town in the province of Zamora, located on a fertile high plain that has been long famous for its wine. The Toro wines were so prestigious that King Alfonso IX of Leon conceded privileges for its production in the 12th Century. Columbus took Toro wine with him on the expedition to discover America in 1492 because it could survive large journeys, due to its structure and body. The Designation of the Toro Region is recent, beginning in the mid 70s, under the Specific Designation (Denominación Específica), which preceded the attainment of Designated Region (Denominación de Origen) on 29 May 1987. Toro wines are very dark, almost black, and have a rapidly growing reputation for their taste and quality.
Photo by TheBusyBrain 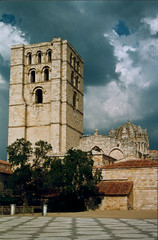 The Cathedral of Zamora stands above the right bank of the River Duero in the southern, higher part of the old town and is still surrounded by its old walls and gates. It is a must-see when in Zamora, with its beautiful dome and golden stone tower. Built between 1151 and 1174, it is one of the finest examples of Spanish Romanesque architecture. Elements were added to the cathedral over the years and include Gothic features and a main facade that is actually Renaissance and contains a lot of intricately carved stonework. The Cathedral Museum, in the 17th century cloister, is notable particularly for its fine Flemish tapestries of the 15th-17th centuries depicting scenes from the Trojan War, Hannibal’s Italian campaign and the life of Tarquin, the Etruscan king of Rome. Another treasure is a Late Gothic monstrance of 1515.
Right next to the Cathedral is the Castle from where you can find some truly stunning views of the town and surrounding areas. It is a Middle Age fortress built between the 10th – 12th centuries and features Pre-Roman foundations and a Romanesque general structure. “Romanesque architecture” is an architectural style of Medieval Europe characterised by semi-circular arches and evolving into the Gothic style, characterised by pointed arches, beginning in the 12th century. Although there is no consensus for the beginning date of the style, with proposals ranging from the 6th to the 10th centuries, examples can be found across the continent, making Romanesque architecture the first pan-European architectural style since Imperial Roman Architecture.
Zamora has some twenty four Romanesque churches, all of which are worth visiting, but some of the most highly recommended are the following: San Juan de Puerta Nueva, Iglesia de Santa María Magdalena, Santiago del Burgo, Arcemillas, San Claudio de Olivares, Santa Maria la Nueva, Hiniesta and Santiago de los Caballeros. There are also some very interesting museums including the Museo de Semana Santa containing artefacts and history related to Easter Week in the region, the Museo Provincial that contains information, art and artefacts pertaining to the general history of Zamora city and the Baltasar Lobo museum dedicated to the life and works of this famous Spanish sculptor and painter.
Photo by teclasorg
The Spanish Blog