Vitoria is the capital city of the province of Álava in the Basque Country in northern Spain. It is known as “Gasteiz” in Basque and officially titled “Vitoria-Gasteiz”. It is the second largest Basque city, after Bilbao. Locals are called “Vitorianos”, “Gasteiztarras”, or sometimes “Babazorros” which means ‘Bean-Eaters’ in Basque.
Vitoria is less than an hour from Bilbao, one hour from Pamplona, two hours from Santander, three hours from Zaragoza and less than four hours from Madrid in the middle of the “Llanada Alavesa” (Alava Plains). The Basque Mountains are a transitional range between two major ones, the Cantabrian range to the west and the Pyrenees to the east. There are two parallel sub-ranges running from west to east, the inner one and the coastal one. In between them there is a 500 m high plateau called “Llanada Alavesa” where Vitoria is located.
Vitoria is famous for the importance it gives to environmental issues, the creation of pedestrian precincts in large areas of the city centre, varied cultural activities and good public services and sports facilities. It was the first city in the Spanish state to adopt Agenda 21, a tool that sets the standards to make progress in the sustainable development of countries and regions. It has 42 square metres of green space per person, making it the European city with the most consolidated green areas. 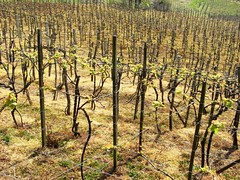 Vitoria’s gastronomy is based on fresh and seasonal ingredients and you can definitely taste the quality. Two of the most popular local ingredients are Alava’s potatoes and wild mushrooms (“Perretxikos”). Must-try local delicacies include the sheep’s cheese from Idiazabal, leek soup (“Porrusalda”), snails “A la Alavesa”, roast suckling pig and river crabs in sauce. Vitoria is full of wonderful cafés, restaurants and bars. The “Pincho Bars” are probably the best way to sample the local gastronomy. “Pinchos” are delicious mini meals, similar to “Tapas” in southern Spain, that can be enjoyed at any time of the day popping from one bar to the next.
Vitoria is also well situated in close proximity to some fantastic wine regions. The most famous wines typical to Vitoria are probably “Rioja Alavesa” and “Txakoli de Alava”. Txakoli is a slightly sparkling, very dry white wine with high acidity and low alcohol content produced in the Basque Country. It is normally served as an aperitif and drunk within one year of bottling as it cannot be stored for longer periods. The most common variety is pale green in appearance but red and rosé varieties exist too. When served, it is normally poured into tall glasses from height, often as an accompaniment to pintxos.
Until the 1980s Txakoli was a home-distilled wine, drunk almost exclusively in the Basque Country and almost in danger of dying out towards the middle of the 19th century. But since some varieties of Txakoli managed to achieve Denominación de Origen certification from 1994 onwards, its quality, spread and appeal have increased. There are three main types/regions of Basque Txakoli: Alavan Txakoli, Biscayan Txakoli and Txakoli from Getaria. Outside of the Basque Country Txakoli is produced on a limited scale in Cantabria, in the Valle de Mena in the province of Burgos and also in Chile.
Photo by jlastras
The Visigoth King Liuvigild founded the city of “Victoriacum” in the year 581 as a celebration of the victory against the Vascones near what is assumed to be the hill occupied by the primitive village of “Gasteiz”. In the year 1181 King of Navarre Sancho VI founded the town of “Nueva Victoria” as a defensive outpost at the site of the previous settlement of “Gasteiz”. In 1200, the town was captured by the troops of Alfonso VIII of Castile, who annexed the town to the Kingdom of Castile. The town was progressively enlarged and in 1431 it was granted the title of City by King Juan II of Castile.
The principal episode in the later history of Vitoria is the Battle of Vitoria of the Peninsular War on 21 June 1813. The French troops under Joseph Bonaparte and Marshall Jean-Baptiste Jourdan were comprehensively beaten by an alliance of British, Portuguese and Spanish troops led by the Duke of Wellington. There is a monument commemorating this battle in the main square of the city, known as the “Monumento a la Independencia” (Monument to Independence).
Wellington launched his attack at Vitoria on June 21, in four columns. After hard fighting, Thomas Picton’s 3rd Division broke the enemy’s centre and soon the French defence crumbled. About 5,000 French soldiers were killed or wounded and 3,000 were taken prisoner, while Wellington’s forces suffered about 5,000 killed or wounded. 152 cannons were captured, but King Joseph Bonaparte narrowly escaped. The battle led to the collapse of French Napoleonic rule in Spain. 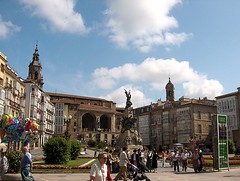 There are some excellent theme tours available from Vitoria’s tourist office through the Medieval Quarter and the Four Towers. There are also guided visits to the churches of San Miguel and San Pedro, the tower of San Vicente, the Palacio de Villasuso, the Palacio de Montehermoso, the Lanterns Museum and the Cathedral of Santa María. The quality of the Vitoria’s visitor programme has obtained recent recognition in the form of the Tourism Prize granted by the Basque Government.
Vitoria’s medieval quarter is home to some wonderful museums and beautiful medieval and renaissance buildings. Some of the most outstanding architecture includes the towers of the gothic Cathedral of Santa María, the Churches of San Pedro, San Vincente and San Miguel. “El Casco Viejo” (the old part) is located on an elevation and is very well conserved. Other remarkable monuments include Casa del Cordon (a gothic building that still contains its major structural elements dating from the 13th to the 15th centuries), the Museum of Archaeology and the Torre de Doña Otxanda, a tower holding the Museum of Natural Sciences.
South of the old city centre we find Plaza de la Virgen Blanca (a square where the Fiestas de la Blanca start), Los Arquillos (an arcade), and the Plaza Nueva (a beautiful neoclassic square that holds a street market every Sunday morning). Further south, the Paseo de Fray Francisco is a wide street sided by fine mansions. Many of these have been recently adapted for public use and include the Palace of Ajuria Enea (the residence of the Lehendakari) and the Museum of Fine Arts with many typical Basque paintings from the 17th and 19th centuries.
Photo by Carmen05

Vitoria is a great place to shop. Throughout the year, there are lots of popular markets and fairs, such as the street market in Calle Correria and the medieval quarter every first Saturday of the month. The Christmas Handicrafts Fair is also a must-see if you happen to be in Vitoria during December.
Vitoria’s medieval quarter and the districts of the centre, Gorbea, Avenida and Lakua, are the main shopping areas. The “Dendaraba” Shopping Centre and “El Corte Inglés” department store are some of the best places to shop in the city centre. “El Corte Inglés” is Spain’s largest chain of department stores and each store offer a wide range of products including music, movies, portable & household electronics, furniture, hardware, books, clothes and groceries. Literally “El Corte Inglés” means “The English Cut” and the company first began in 1940, founded by Ramón Areces.
Those looking for souvenirs, handicrafts, antiques and designer shops should head to the medieval district where you can also combine your shopping activities with a cultural tour. Calle Correria is a great place to start. There are many craftsmen here specialising in pottery, ceramics, leather and wood carving. You can see traditional Basque pots and plates being turned and fired on the premises. The famous Fournier playing cards are readily available in Plaza de la Provincia. They are reproduced from historic designs held by the House of Fournier.
Photo by Roberto_Garcia
The Spanish Blog