Valladolid is located in north-central Spain, upon the Pisuerga River and within the Ribera Del Duero wine-making region and in its history has twice been the capital city of Spain. It is now the capital of the province of Valladolid and of the autonomous community of Castile and Leon. It preserves an interesting group of Renaissance buildings in its old quarter, made up of houses, palaces, churches and one of its most symbolic buildings, its cathedral. The Valladolid “Seminci” International Film Week is an event not to be missed in the Spanish cinema calendar.
Valladolid was captured from the Moors in the tenth century. In 1469 Queen Isabella of Castile and King Ferdinand of Aragon were married in the city and by the fifteenth century it was the residence of the Kings of Castile and remained the capital of the Kingdom of Spain until 1561, when Philip II, born there, moved the capital to Madrid. During this time Valladolid University became one of the most important in the country. Christopher Columbus died in Valladolid in 1506 in a house which is now a Museum dedicated to him. It was made the capital of the kingdom again between 1601 and 1606 by Philip III. It was in that period when Cervantes published his first edition of Don Quixote in 1604. Cervantes created a fictional origin for the story based upon a manuscript by the invented Moorish historian, Cide Hamete Benengeli. Don Quixote De La Mancha is the most influential work of literature to emerge from the Spanish Golden Age and the entire Spanish literary canon. As a founding work of modern Western literature, it regularly appears high on lists of the greatest works of fiction ever published.
The name “Valladolid” has a similarity with “Baladul Walid” meaning “The City of Walid”, which was the name of the city during the centuries of Muslims rule. “Walid” probably referred to one of the Ummayad dynasty’s greatest caliphs in Damascus – though no good reason is given as to why the Moors should have given such a grand title to what was then a village on the remote periphery of their empire. Another suggestion for the origin of Valladolid’s name is that it derives from the Latin word “Vallis” (“valley”), the Spanish preposition “de” (“of”) and “Olid” (“olives”) – the “Valley of Olives”.
Photo by angeldp 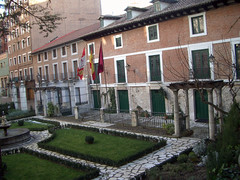 Valladolid boasts some wonderful architectural manifestations of its former glory and these include the unfinished cathedral designed by Juan de Herrera in the 16th century. Inside the cathedral, the great chapel houses a magnificent reredos made by Juan de Juni in 1562. The complex is linked to the Diocesan Museum, which holds carvings attributed to Gregorio Fernández and Juni, as well as a silver monstrance by Juan de Arfe. Plaza Mayor is the city’s main square and was the template for that of Madrid and of future main squares in the Castilian-speaking world. Other notable buildings of interest include the National Sculpture Museum, next to the church of Saint Paul, which includes Spain’s greatest collections of polychrome wood sculptures, and the Faculty of Law of the University of Valladolid, whose facade is one of the few surviving works by artist Narciso Tomei.
The Science Museum is next to the Pisuerga River and the only surviving house of Miguel de Cervantes is also located in Valladolid. “Casa de Cervantes” is where the author of Don Quijote lived with his family between 1603 and 1606. As a curiosity, it was in this house where the writer gave his masterpiece the finishing touches. A visit to the house-museum enables you to get to know the way of life of a noble family in the 17th century through possessions and furniture from the time. You can also visit the Christopher Columbus House-Museum, where the navigator spent the last years of his life. Nowadays the palace exhibits various pieces and documents related to the discovery of The New World. You should also visit the house of Romantic writer, José Zorrilla, one of the city’s most illustrious characters.
Other interesting churches are the gothic church of Santiago, with an important reredos depicting the Adoration of the Magi, created by Berruguete in 1537 and the church of Santa María la Antigua with its unusual pyramid-shaped Romanesque tower from the 12th century. The Monastery of Santa María la Real de las Huelgas was originally built in 1600. Monasterio de Santa Ana has various paintings by Francisco de Goya, San Juan de Letrán Church has an outstanding Baroque facade built in 1737 and Monasterio de los Padres Filipinos was designed by the famous architect Ventura Rodríguez in 1760.
Photo by angeldp
Valladolid International Film Festival is also known as “Seminci Internacional de Cine de Valladolid” and has been held annually in the city since 1956. It has introduced directors and cinematographers who were previously unknown in Spain such as Ingmar Bergman, Luis Buñuel, François Truffaut, Andrzej Wajda, Federico Fellini, Ermanno Olmi and Yilmaz Güney. Between 1984 and 2004, a festival team headed by Fernando Lara contributed to the growth of the range and scope of the festival so that fiction and documentaries played alongside animations and shorts. In April 2005 Argentine film critic and writer Juan Carlos Frugone took over the reins of the festival up until April 2008 when he resigned. In June 2008 journalist Javier Angulo was elected as the new director.
Various loopholes in state censorship have been utilised by the festival to present films that would otherwise have been impossible to see in Spain. An award or an enthusiastic reception from the audience and the critics meant, on numerous occasions, that the official state bodies gave the go-ahead to certain films which Francisco Franco’s regime considered out of line with their ideology. A film could be placed more easily if it had previously done well at Valladolid. Even after the death of Franco in 1975, Valladolid continued to be the testing ground for films which had been banned. For example, the premiere in Spain of Kubrick’s “A Clockwork Orange” at the 1975 festival is still recalled as a landmark occasion.
As one of Europe’s oldest festivals, Valladolid has always been characterised by its willingness to take risks and to innovate in its programming. It has also been keen to critically examine each new movement as it has arisen, whether it be German, Polish, Chinese, Canadian or otherwise. With a genuine concern for the art of cinema, for film-making and film-makers rather than the more obvious commercial or glamorous aspects of the industry, the festival has built up an identity of its own – equally attractive to enthusiasts, professionals and the media. 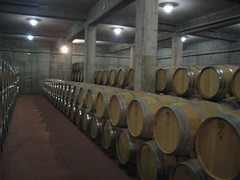 Valladolid’s cuisine is very Castilian in the regional products it uses, its loyalty to tradition and the establishment of ancestral dishes. At the same time a modern, creative cuisine has recently emerged, which is lighter and more daring in the combination of local ingredients. Valladolid loves meat, especially roast meat. Suckling lamb (“Lechazo” – baby lamb that has only drunk its mother’s milk and is slowly roasted in a wood oven), suckling pig and baby goat are very popular, as well as game meats like partridge, quail and rabbit. When it comes to poultry, hen stew with egg yolk sauce is something of an institution within Spanish cuisine and Tordesillas’ Cockerel, a type of cockerel reared in Tordesillas following ancestral methods, is also a delicacy.
Despite being an inland province, fish is quite common in Valladolid. Brought from the Cantabrian Sea, fish like red bream and hake are a major part of the local cuisine. Cod and frog’s legs are other favourites. Valladolid also offers a great variety of wild mushrooms and the asparagus, white beans and lentils are also excellent. Pine nuts are produced in great quantities and used in a variety of stews. Sheep cheese from Villalón de los Campos can compete with the best sheep cheeses in Spain. Valladolid has a great bread to go with every great dish, such as the delicious “Cuadros” from Medina del Campo, the pork-scratching bread and the “Lechuguinos”. The pastries and baked goods from the province of Valladolid are excellent. Recommended sweets to try include St. Mary’s ring-shaped pastries, St. Claire’s sponge cakes, pine nut balls and cream fritters.
Valladolid also produces some fine wines. The ones that fall under the Designation of Origin Cigales are very good. White wines from Rueda and red wines from Ribera del Duero have such supreme quality that they are quickly becoming emblems of Spanish oenology. The Ribera del Duero is located on the extensive, elevated northern plateau of the Iberian Peninsula. It occupies the southern plains of the province of Burgos, extends west into Valladolid and includes parts of Segovia and Soria provinces to the south and east, respectively. As its name suggests, the region follows the course of the Duero River for approximately 115 km upstream from Valldolid. It is one of nine wine regions within the autonomous community of Castile and León. Ribera del Duero is home to the world-famous and highly-prized Vega Sicilia and Tinto Pesquera wines and is dedicated almost entirely to the production of red wine from the Tempranillo grape.
Photo by vorjales 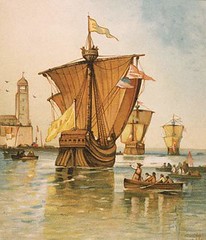 Christopher Columbus died in Valladolid in 1506 in a house which is now a Museum dedicated to him. Valladolid was the capital of the Kingdom of Spain until 1561 during “The Spanish Golden Age” – a period of flourishing arts and literature in Spain that began in around 1492, with the end of the Reconquista, the sea voyages of Christopher Columbus to the New World, and the publication of Antonio de Nebrija’s “Gramática de la Lengua Castellana” and ended in around 1659, with the Treaty of the Pyrenees, ratified between France and Spain.
Christopher Columbus (1451 –1506) was a Genoese navigator, colonizer and explorer whose voyages across the Atlantic Ocean led to general European awareness of the American continents in the Western Hemisphere. Although not the first to reach the Americas from Europe (he was preceded by Leif Ericson from Iceland, who built a temporary settlement 500 years earlier at L’Anse aux Meadows) Columbus initiated widespread contact between Europeans and indigenous Americans. With his four voyages of discovery and several attempts at establishing a settlement on the island of Hispaniola, all funded by Queen Isabella of Spain, he initiated the process of Spanish colonization which foreshadowed general European colonization of the “New World.”
His initial 1492 voyage came at a critical time of growing national imperialism and economic competition between developing nation states seeking wealth from the establishment of trade routes and colonies. Columbus’s far-fetched scheme won the attention of Queen Isabella of Spain. Severely underestimating the circumference of the Earth, he estimated that a westward route from Iberia to the Indies would be shorter and more direct than the overland trade route through Arabia. If true, this would allow Spain entry into the lucrative spice trade commanded by the Arabs and Italians. Following his plotted course, he instead landed at a locale he named San Salvador, a North-American Island he mistook for the East-Asian mainland.
Photo by bravenewtraveler