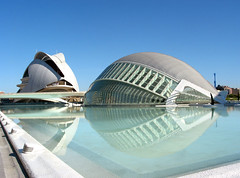 Valencia is the capital and the largest city of the Autonomous Community of Valencia. It is also the third largest city in Spain behind Barcelona and Madrid. Valencia is probably most famous for its main festival “Las Fallas” and the world famous Spanish dish “Paella” which originated in the area. The original Latin name of the city was “Valentia”, meaning “strength” or “valour” as the city was used for the Roman practice of recognising the valour of former Roman soldiers after a war. The foundation of Valentia in the 2nd century BC was due to the settling of the Roman soldiers who fought against Iberian local rebel Viriatus.
The city contains a dense monumental heritage that includes the Lonja de la Seda World Heritage Site, but its landmark is undoubtedly the City of Arts and Sciences, an avant-garde and futuristic museum complex. Few cities are, like Valencia, able to combine so harmoniously remains from remote periods, as far away as 138 B.C., with the most modern, avant-garde buildings erected in the new millennium. Valencia is all about commerce, culture, cinema, theatre, museums, music and business. It is a place for international and avant-garde design and one of the most attractive cities in Europe when it comes to fairs and conventions.
Due to its location, Valencia has been the Spanish gateway to the Mediterranean. The fine sand and crystal waters, the vastness of the open sea, and the proximity of the coastal mountain range lend the Valencian coast a unique appeal. There are outstanding beaches and dunes at Canet d’En Berenguer, where the coastline becomes leisurely and residential. Within the city of Valencia, the beaches of La Malvarrosa and Levante offer a wide variety of places to dine and enjoy a quiet evening by the sea. To the south, nature becomes predominant at Saler Beach and in the L’Albufera Nature Reserve. The beaches of Cullera, Gandía and Oliva combine beautiful landscapes with a number of sporting and recreational facilities. Interesting routes await you inland, such as the one defined by the course of the Turia River or charming towns in the province like Buñol, Requena and Xátiva.
Photo by palm z 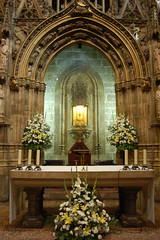 On 9th July 2006, during Mass at Valencia’s Cathedral, Pope Benedict XVI used “The Santo Caliz”, a 1st-century Middle-Eastern artefact believed by many to be the Holy Grail. It was supposedly brought to that Valencian church by Emperor Valerian in the 3rd century, after first being brought from Jerusalem by St. Peter to Rome. The Santo Caliz (“Holy Chalice”) is a simple, small stone cup. Its base was added in medieval times and consists of fine gold, alabaster, and gem stones. According to Christian mythology, the Holy Grail was the dish, plate, or cup used by Jesus at the Last Supper, said to possess miraculous powers.
The Cathedral of Valencia stands in the same place as the first temple of the original Roman city and later the Arab mosque. Built between 1262 and 1426, it has experienced many expansions and alterations and these have left their mark in the interesting juxtaposition of styles laid over the prevailing primitive Gothic. The “Miguelete” is probably the tower most closely identified with Valencia and is the Gothic bell tower of the Cathedral. It rises to a height of 50.85 metres, the same dimensions as its perimeter. The effort it takes to climb all 207 steps to the top of the tower is more than rewarded by the splendid view of the city that it presents.
Valencia was selected in 2003 to host the historic America’s Cup yacht race becoming the first European city to do so. The America’s Cup is the most prestigious regatta and match race in the sport of sailing and the oldest active trophy in international sport, predating the Modern Olympics by 45 years. The sport attracts top sailors and yacht designers because of its long history and prestige. The Cup originally named the Royal Yacht Squadron Cup was changed to the America’s Cup after the first yacht to win the trophy, the schooner America. The America’s Cup matches took place in Valencia in the summer of 2007. On 3 July 2007, Alinghi defeated Team New Zealand, and successfully defended the America’s Cup. 22 days later, on 25 July 2007, the leaders of the Alinghi syndicate officially announced that Valencia would be the host city for the 33rd America’s Cup, held in June 2009.
Photo by Paul Stevenson 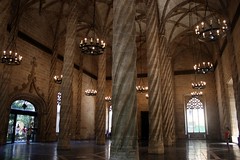 There are some beautiful old buildings to be found in the historic quarter of Valencia such as the churches of Santa Catalina, San Nicolás and San Martín. In the Plaza de la Virgen there is the Basilica of La Virgen de los Desamparados, along with, nearby, the Royal Convent of Santo Domingo, built by the Dominican order in the 13th century, with the approval of King Jaime I. From the ancient medieval walls, two old gates remain: the Serranos and Quart Towers. The Palau de la Generalitat (Palace of the Autonomous Government) is a Gothic-style structure, built in the 15th century and later extended in the 17th and 20th centuries. The building stands out because of its large Renaissance tower that leads to the Plaza de la Virgen.
Yet probably the most remarkable building is the Lonja de la Seda (the Silk Exchange), an elegant Gothic structure built towards the end of the 15th century that has been declared World Heritage Site. This ancient trading place holds authentic treasures in its interior, such as the monumental Salón de las Columnas, the Torreón Central and the Sala de Juntas del Consulado del Mar. The City Hall, located in the city centre, occupies the old premises of the 18th century Real Casa de la Enseñanza. Modernism has also left a legacy in this city, with beautiful examples like the Central Market, made of iron, stained glass, and ceramic tiles; the Colón Market; and the magnificent Estación del Norte.
World-renowned and Valencia-born architect Santiago Calatrava produced the futuristic City of Arts and Sciences (Ciutat de les Arts i les Ciències), which contains an opera house/performing arts centre, a science museum, an IMAX cinema/planetarium, an oceanographic park and other structures such as a long covered walkway and restaurants. The project underwent the first stages of construction in July, 1996 and the finished “city” was inaugurated April 16, 1998 with the opening of L’Hemisfèric. The last great component of the City of the Arts and the Sciences, El Palau de les Arts Reina Sofía, was presented in October 9, 2005, Valencian Community Day. Calatrava is also responsible for the bridge named after him in the centre of the city. The Music Palace (Palau De La Música) is another good example of modern architecture in Valencia.
Photo by Nestosjp
There are numerous fine museums and galleries in Valencia. One of the most symbolic is the Ciudad de las Artes y las Ciencias (City of the Arts and Sciences), a futuristic complex housing the L’Hemisfèric Cinema-Planetarium; the Palace of the Arts, devoted to promoting and publicising art; the Príncipe Felipe Science Museum; and the Universal Oceanographic Park. Valencia is one of the top cities on the Spanish art scene thanks largely to the Institute Valencian Institute of Modern Art (IVAM). This centre has nine galleries that include permanent collections of the works of Julio González and Ignacio Pines, as well as other temporary exhibitions of painting, photography, and modern art, from the avant-garde movements of the early 20th century to the present.
Located inside a Baroque building, the San Pío V Museum of Fine Arts is one of the most outstanding in Spain, thanks to its collection of the work of early Valencian artists. Its collection includes Valencian school painters such as Hernando Yáñez de la Almedina, Juan de Juanes, the Ribaltas, Ribera, Espinosa, Vicente López, Sorolla, and Pinazo and other artists of the stature of Pinturicchio, Andrea del Sarto, Van Dyck, Murillo, Velázquez, Bosch, El Greco, and Goya. The museum also has sculptures by Mariano Benlliure as well as interesting archaeological artefacts. Another remarkable art gallery is located in the complex of the Corpus Christi Seminary. The Patriarch’s Museum has a collection of 16th and 17th century paintings as well as works by Juan de Juanes, El Greco, and early Flemish painters. The church preserves Ribalta’s “Last Supper” at the high altar as well as a Flemish tapestry in the Communion Chapel.
The González Martí National Ceramics and Sumptuary Arts Museum is located in the Palace of Marqués de Dos Aguas. It was built in the 15th century and refurbished in the 18th century. The interior displays a vast collection of ceramics from Manises, Paterna, and Alcora, some of which date back to Christian times. Just as remarkable is the ancient pottery collection, the “Socarrat” ceramic collection, the Chinese and Japanese pieces and the pieces signed by the likes of Picasso. The festive nature of the people of Valencia is represented in two museums. The Museum of the Fallas keeps the “Ninots” (papier mâché figures) which have been spared from burning in the annual Valencia fire festival from every year since 1934 alongside other elements that illustrate the history of the Fallas and The Falla Artist Museum houses sketches, posters, photographs, and more spared “Ninots”. Other places to visit include the City Museum, the Municipal History Museum and the homes of famous local personalities such as Vicente Blasco Ibáñez and José Benlliure. 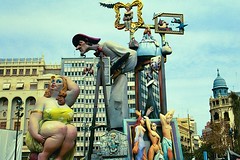 Valencia is famous for Paella Valenciana, traditional Valencian ceramics, nearby (Buñol) tomato throwing festival “La Tomatina”, the striking modern architecture of the City of Arts and Sciences and of course “Las Fallas”. Las Fallas is a traditional Valencian festival held every March in praise of Saint Joseph. The term “Fallas” (“Falles” in Valenciano) refers to both the celebration and the monuments created during the celebration. Each neighbourhood of the city has an organised group of people called the “Casal Faller” (or “Comissió Fallera”) who work all year round holding fundraising parties and dinners. Their work culminates in the creation of a construction known as a “Falla” which is eventually burnt.
There are a few different theories regarding the origin of the Falles festival. One theory suggests that the Fallas started in the Middle Ages, when artisans put out their broken artefacts and pieces of wood that they sorted during the winter then burnt them to celebrate the spring equinox. Valencian carpenters used planks of wood to hang their candles on and these planks were known as “Parots”. During the winter these were needed to provide light for the carpenters to work by, but with the coming of spring they were no longer necessary and so they were burned. With time and the intervention of the Church the date of the burning of these Parots was set to coincide with the celebration of the festival of Saint Joseph, the patron saint of carpenters.
This tradition continued to change. The Parot was given clothing so that it looked like a person. Features identifiable with some well-known person from the neighbourhood were added as well. Until the beginning of the twentieth century, the Fallas were tall boxes with three or four wax dolls dressed in cloth clothing. This changed when the creators began to use cardboard. The creation of the Falla continues to evolve and the largest monuments are made of easily moulded polyurethane and soft cork and can be in excess of 30 metres. The Fallas are developed according to an agreed theme that is usually a satirical jab at anything or anyone unlucky enough to draw the attention of the Fallers. During Fallas, many people from their Casal Faller dress in the regional costumes from different eras of Valencia’s history and the dulzaina (a Spanish double reed instrument in the oboe family) and drum are frequently heard.
Photo by AnotherChrisSullivan
The Spanish Blog