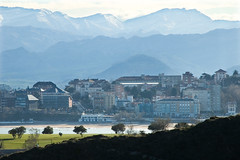 The port city of Santander is the capital of the autonomous community of Cantabria on the north coast of Spain, with Asturias to the west and the Basque Country to the east. The vast majority of Cantabrians live in Santander and the city is the home of the Roman Catholic Diocese of Santander. Santander offers a vibrant city atmosphere, beautiful beaches, countryside and nature, fine gastronomy and a proud culture. The city is built around a natural port, which has been used since before the occupation of the Roman Empire. The surrounding countryside is stunning, with wide open areas and beaches, particularly Mataleñas, Sardinero and La Magdalena.
The rocky and steep coast to the north of the city has recently been converted into a natural park. During migration season, many bird watchers gather there to observe the migratory birds. Just a few kilometres away is the Dunas Liencres Natural Park, the most extensive dune system in the whole of the Cantabrian coast. To the south of the bay is the Peña Cabarga Park, and from the summit of Peña Cabarga itself you are treated to an impressive view of practically the whole of Cantabria. At the foot of the mountain is the Carbárceno Natural Park, the biggest zoo in Europe, where you can see tigers, elephants, giraffes, hippos and much more. The enclosures are so big it is almost as if the animals were in the wild.
Very little of Santander’s old quarter remains; it was destroyed in 1941 in a fire that even consumed the cathedral. The temple, which has now been completely restored, is gothic in style, and characterised by its austerity. It was built on high ground, in a location which was, in antiquity, the port entrance, and was built on the ruins of a pre-Roman settlement, whose remains can still be seen in the Romanesque Chapel of Santo Cristo.
Photo by jroblear 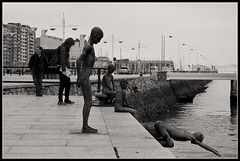 Santander was known as “Portus Victoriae Iuliobrigensium” during the time of the Roman Empire. Its present name is derived from St Emeterio, a martyr whose head, according to the legends, was brought there in the 3rd century, along with that of St Celedonio, according to legend. The Romans placed great value on the geology of the Bay of Santander. Santander was an important port for Castile in the later middle ages and also for trade with the New World. It officially became a city in 1755.
In the early 1900’s Santander became the favoured summer residence of King Alfonso XIII, who built the Palacio de la Magdalena as the residence of the royal family during their holidays. The city gained great popularity from this and from the Victorian enthusiasm for sea bathing and it remains popular with the Spanish for beach holidays today.
Santander suffered significantly to the great fire of 1941. Fanned by a strong south wind, the fire burned for two days. There was only one casualty, a fire-fighter killed in the line of duty, but thousands of families were left homeless and the city was plunged into chaos. When it was over, the historic part of Santander was almost completely destroyed. The fire destroyed the greater part of the medieval downtown and gutted the city’s Romanesque cathedral.
Photo by tupolev y su cámara 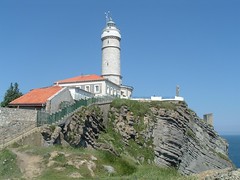 Whilst in Santander it is well worthwhile taking a walk to the lighthouse. From the city centre to the lighthouse is about 4km and during this walk you will enjoy of some of the most breathtaking views of Santander’s coastline. Santander is famous for its wonderful beaches and these include “Playa de los Peligros”, “Playa de La Magdalena”, “Playa de Los Bikinis” and “Playa El Camello”. “Playa de La Concha” is a beautiful beach located in front of the Casino and “Playa El Sardinero” is the biggest beach of the city and is also combined with several parks. “El Sardinero” is split into two beaches, “Primera” and “Segunda”, with “Primera” probably the most famous.
One of the most beautiful boardwalks in all of Spain is “Avenida Reina Victoria”. On the other side of the bay you can make out the towns of Pedreña, Somo and the huge beach known as Puntal. This route will eventually take you to “Magdalena Peninsula”, where you can visit their park, and the Royal Palace. The large Santander Gran Casino is also a must-see destination. Probably Santander’s most popular museum is the Museum of Fine Arts, located in the city centre. You should also visit the “Palacio de Festivales” where many concerts and musicals are held.
The shopping area located in the old quarter between the City Hall, Avd Calvo Sotello, Guevarra and Plaza Antonio Pombo is not massive but there are some excellent and very exclusive stores. Santander’s cathedral, “Catedral del Cristo”, is beautiful inside and out. From the beginning of June until the end of September you can take a boat trip from El Embarcadero out of the Santander bay where you can experience the beautiful coast and Cantabrian Sea in all its glory. If you enjoy golf, the Santander Golf course is excellent, though usually a little windy, and offers wonderful panoramic views over the sea.
Photo by mistaheinlein02 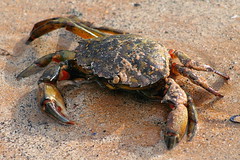 The Cantabrian Sea supplies the region with its most characteristic food. This is, of course, the finest fish and seafood. The turbulent waters provide goose barnacles, all kinds of crab, clams, lobsters, crayfish and king prawns, not to mention squid of the highest quality, sea bream, scorpion fish, anchovies and sardines. Roasted sardines are traditional in the region, served on a simple wooden dish. Some of the most renowned Cantabrian dishes are hake in “salsa verde”, “Maganos Encebollados” and baked clams.
Beef is probably the finest Cantabrian meat and the beef of the “Tudanca” cow is particularly good. The largest livestock fair in Spain is held in the region: “Feria Nacional de Ganados in Torrelavega”. There is also high quality game: wild boar and a variety of venison. Pork is a key ingredient of the “Cocido Montañés”, which also includes beans, cabbage, rice black pudding and other rustic ingredients.
The desserts are equally delicious, especially the “Quesadas Pasiegas” (cheesecakes). Pastries are also traditional and are given different names in different areas such as “Corbatas” in Unquera, “Polkas” in Torrelavega and “Sacristanes” in Liérganes.
Photo by foxypar4 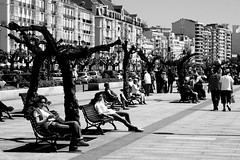 Santander residents usually start their evenings with “El Paseo”, which is basically a leisurely stroll through the main streets or along the “Paseo Maritimo”. This is a custom that is followed throughout Spain and is the perfect way to build up an appetite through fresh air and exercise. There is a wonderful long “Paseo” available in Santander all around the coastline near the city.
Again as with most of Spain, Santander is extremely fond of its fiestas. These can last for days and Santander’s street cafés and bars are well equipped to accommodate a large capacity of visitors and locals. As the evening sets in, these places usually begin getting crowded and most stay open until the sun comes up the following morning. With Santander’s high number of excellent city beaches, the city is a great place for summer festivals.
Santander is quite a fashion conscious city and locals are keen on designer clothes. Mature Spaniards dress conservatively and scantily clad holiday-makers can be frowned upon in small villages, especially those far from the coast. One should be particularly careful of dress code upon entering places such as the casino and the churches.
Photo by alfonso benayas