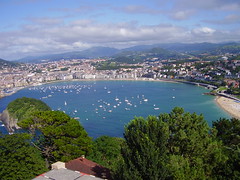 San Sebastián is known as “Donostia” in Basque and is the capital city of the province of Gipuzkoa, in the Basque Country of northern Spain. Locals call themselves “Donostiarras”.
San Sebastián is located on the southern coast of the Bay of Biscay at the mouth of the river “Urumea” and its picturesque coastline makes it a very popular beach resort. It boasts one of the best city beaches in Europe. In addition to the wonderful seaside environment, San Sebastián also offers some beautiful hilly countryside nearby. The city is quite small and cozy and features numerous superb fish restaurants, pintxo bars (tapas bars) and designer clothes shops. Many of the best pintxos bars can be found in the old quarter of the city.
San Sebastián is renowned for its flamboyant high class fine dining restaurants. The city and its surrounding area is home to a high concentration of Michelin class restaurants, including Arzak (San Sebastian), Berasategi (Lasarte), Akelarre (district Igeldo). Arzak is possibly the best known and has earned three Michelin Guide stars and a permanent feature on the Restaurant Magazine Top 50 Restaurants in the World list. Built as a house in 1897 by José Maria Arzak Etxabe, it has stayed in the family to this day and was awarded its Michelin stars in 1989.
Photo by innovacionweb.com
The annual San Sebastían International Film Festival (“Festival Internacional de Cine de San Sebastián” in Spanish and “Donostia Zinemaldia” in Basque) is the most important Spanish international film festival and one of the most important film festivals in the World.
The Festival originated in 1953 and was originally intended to honour Spanish language films. Films of other languages became eligible for consideration in the late 1950s and now the festival attracts a wide international audience.
The majority of awards are determined by a jury, but an audience award is also given for the most popular film. The main awards are the Golden Shell (“Concha de Oro”) and Silver Shell (“Concha de Plata”). Recent Directors to be awarded the Best Director award include Nick Broomfield (“Battle for Haditha”), Michael Winterbottom (“Genova”) and Danny Boyle (“Shallow Grave”). Every year the festival also honours one, two or three actors with the Donostia Lifetime Achievement Award. Winners of this award include Antonio Banderas, Al Pacino, Michael Caine and Robert De Niro. 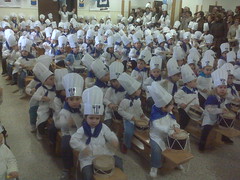 “San Sebastían Day” is celebrated every year on 20th January when the locals celebrate a festival known as the “Tamborrada”. At midnight, in the Konstituzio plaza in the old part of the city, the mayor raises the flag of San Sebastián and for 24 hours the city celebrates in style. The adults dress as cooks and soldiers and march proudly around the city in rememberance of the Spanish tradesmen who mocked the occupying French army during the Napoleonic wars, by aping their daily procession from Monte Urgull to the water-pump at San Telmo. For “Donostiarras” this is the most celebrated festival of the year and the sound of drums fills the night. The children continue the celebrations in the morning, also marching around the city.
Another popular festivity is “Nagusia” (“Semana Grande” in Spanish – “Big Week”) held every year in August. Brass bands play in the streets, there is a fireworks competition, popular music performances by the beach and fairground attractions on the seaside promenade “Paseo Nuevo”. September in San Sebastían sees “Basque Week” and a celebration of everything Basque. Diverse activities include traditional improvising poet performances, “Pelota” (ball) games, stone lifting contests, dance exhibitions and cider tasting. The main highlight is probably the rowing boat competition, where teams from different towns of the Bay of Biscay contend for the “Flag of La Concha”.
“Caldereros” fiesta is over 125 years old and takes place on the first Saturday of February, setting the scene for the upcoming Carnival. Different groups of people dressed in gypsy attire take to the streets banging on pots and pans with a hammer or spoon while singing traditional songs. Another popular festival called “Santo Tomas” takes place on the 21st December. Stalls are arranged across the city centre, people dress in traditional Basque outfits and traditional and typical produce is showcased and sold on the stalls.
Photo by jesus.gil.hernandez
San Sebastían is renowned for its top quality Basque cuisine. The Basque Country is certainly one of the best places in Spain to find great food, if not the best and much of this fame comes from San Sebastían and its superb bars and restaurants.
“Tapas” may have been invented in Andalucia, but there is no better place to eat them than San Sebastían’s old quarter. In the Basque Country they are known as “Pintxos” and traditionally locals have one or two “Pintxos” in the early evening to fight off their hunger before later sitting down for a proper meal. They are usually washed down with a glass of wine or a small beer. Cold “Pintxos” are displayed on the bar and are dangerously tempting, especially after a few drinks. You simply help yourself to whichever “Pintxo” you fancy and then settle up with the barman before you leave. Hot ones are also available and may take a little time to cook, but will always be worth the wait.
San Sebastían harbour area is a great place to find the freshest seafood. This can be eaten in a simple harbour tavern or a more formal restaurant, but in either location you will not mistake the freshness of the ingredients. San Sebastían´s Michelin star restaurants are obviously a big draw and a fantastic treat if your wallet allows. Besides Basque restaurants, you can also find numerous other fine cuisines on offer such as Chinese, German, Galician and Italian. The November “Lo Mejor de la Gastronomia” conference and competition celebrates San Sebastían eating culture and includes nominations for the best “Pintxo bars” and restaurants. 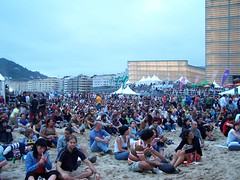 The San Sebastían Jazz Festival held in late July is the longest, continuously running Jazz Festival in Europe. It features the top musicians from all around the world and also attracts a huge international audience.
Much of the international audience ties in their visit after first attending the San Fermín festival in relatively nearby Pamplona. This features the famous “running of the bulls” spectacle and is held every year in early July. Some top rock bands also arrange rock concerts in San Sebastían to coincide with the Jazz Festival. It really is a wonderful time to visit the city if you are a music lover.
The first San Sebastían Jazz Festival was held in 1966 and is often known as “Jazzaldia”. Many different locations throughout the city have been used for the stages, but probably the most widely used and popular location has been “La Plaza de la Trinidad”. However “Zurriola” beach, “El velódromo de Anoeta” and the “Kursaal” are also regularly used. The San Sebastían Kursaal Congress Palace and Auditorium is one of the city’s most prominent landmarks and was designed by Spanish architect Rafael Moneo. It opened in 1999.
Photo by Capitan Tostadilla