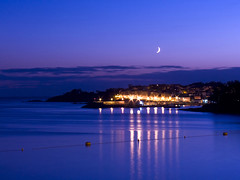 Pontevedra city is the capital of both county and province of the same name. It is located in the “Rias baixas” (lower bays) of Galicia between the Galician capital Santiago de Compostela (58 km to the north) and the largest Galician city, Vigo (30 km to the south). It is the region’s most southern sea facing province. The city sits at the end of the ria that bears its name, occupying the valleys of the Lérez and Tomeza rivers. It extends southwards to the mouth of river Verdugo in Ponte Sampaio and is surrounded by four mountainous regions divided by two faults, one stretching north-south and one from northeast to southwest.
Pontevedra has traditionally been a trading city. In the middle ages, guilds thrived in the old town, giving name to streets and squares still preserved today. At that time Pontevedra was the main Galician port, with very intense fishing and sea-trading activity. Now the tiny Pontevedra harbour is only used for recreational purposes, not for cargo or passenger transportation. In 1833 Galicia was sub-divided into four provinces and Pontevedra became an administrative and commercial centre, in contrast to Vigo, which attracted the industrial activity. In fact, the first modern industries to appear in Pontevedra would only do so in the 1960s.
Overall Pontevedra is rainy, especially at the end of Autumn and Winter, with an annual average precipitation of 1,700-1,900 mm and around 102 rainy days per year. Summer is generally dry and the average annual temperature is 15°C. Its proximity to the sea and, most importantly, the calming effect of the ria, make temperatures pleasant for most of the year. Yet, like the whole Galician coast, Pontevedra is subject to occasional Atlantic storms in Winter. These are characterised by a quick drop in temperature, rain and gales.
Photo by Angel T.
Historians and archaeologists tend to agree that the initial settlement at Pontevedra was probably formed during the integration of “Gallaecia” (old Galicia) into the Roman Empire in the 1st century BC. The name of the city is derived from the latin “Pons/Pontis” (bridge) and “Veteris/Vetera” (old), hence “Ponte-Vetera” (the old bridge). This is in reference to the old Roman bridge across the Lérez River that is still standing.
From the 12th to 15th century, Pontevedra grew in importance as a trade and communications hub and became one of Galicia’s main urban centres and the largest Galician port. Centuries later, however, because of the sedimentation caused by river Lérez, the ria became gradually unsuitable for large scale navigation. The port drastically reduced its activity in the 17th and 18th centuries and, furthermore, political decisions and dynastic conflicts provoked a general decay in trade, thus resulting in the depopulation of the city. In fact, the population was reduced in half during that time, also affected by epidemics. In the beginning of the 19th century Pontevedra was little more than just a small backward town. Fishing, arts and crafts kept the economy going.
Yet, with the establishment of new provincial divisions in 1833 Pontevedra suddenly saw itself transformed into a provincial capital. Pontevedra then grew and slowly became an administrative centre. The introduction of the railway also reconnected the city with the rest of the country, after having lost its harbour. The 19th century saw a cultural, economic and urban revival and was the cultural and political heart of Galicia going into the 20th century. Yet, the Spanish Civil War (1936-1939) and subsequent Francoist dictatorship (1939-1975) suddenly put a drastic end to Pontevedra’s progression. Political repression and economic hardships forced many into emigration and it was only during the 1960s, with the introduction of some industrial activity, that the local economy partially recovered. 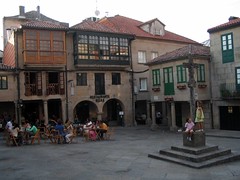 Pontevedra is often described as the “definitive old Galician town”. Sights include the pilgrim chapel in the “Praza da Peregrina”, the historic “Zona Monumental” (old city), the “Praza de Leña” (a square), the market, the large museum and the “Alameda” promenade along the ria. In recent years most historical buildings and streets have been either re-built or revamped, providing for a well preserved urban landscape.
Since 1999 Pontevedra has seen an intense urban renewal and cultural revival. For example, Pontevedra has transformed into one of the most accessible cities for disabled people, being awarded a national prize on urban renewal for this issue in 2006, and has a large pedestrian centre in the old town together with a number of lovely parks and public squares. Pontevedra may not be on the same scale as A Coruna or Santiago de Compostela, but it has its fair share of historic buildings, churches and monuments, along with plenty of attractive squares and a large shopping district.
Most of the town is on the flat, although the older district requires you to walk up and down a slight incline. It is becoming increasingly popular with domestic and foreign tourists. Bars and cafes are plentiful and a series of “prazas”, or small plazas, including the “Teucro” and “Ferreria”, punctuate the inter-linked streets. There is a great atmosphere in the city and the old town really comes alive at night when all of the bars are full to over-flowing well into the early hours.
Photo by Mazintosh 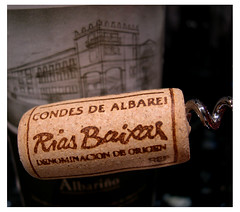 Pontevedra’s cuisine is defined by the abundance of fish and seafood provided by the estuaries of the “Rías Baixas” region and the river “Miño”. Pontevedra offers a huge variety of food and drink that beautifully combines tradition with the newest trends, always managing to bring out the exceptional quality of the local products. Pontevedra is also the land of the “Albariños” wines, under the Designation of Origin Rías Baixas, and among the best white wines in the world.
Recommended seafood to be enjoyed in Pontevedra include shrimp from Sanxenxo, lobsters from A Guarda, oysters from Arcade, mussels from Arousa and clams from Carril. Other popular products are velvet swimcrab, spider crabs, cockles, razor shells, scallops and variegated scallops. Fantastic seafood pies are made with regular scallops, variegated scallops and cockles. Sometimes they are also made with “Xoubas” (small sardines) or lamprey. Popular fish include sea-bass, salmon, lamprey, sole, anglerfish, turbot, conger eel, sardine, horse mackerel and common mackerel. Recommended dishes include “Caldeiradas de pescado” (fish stew), octopus and baked scallops.
Lamprey from the “Miño” river is a true vestige from remote times, also present in the “Umia” and “Ulla” rivers. It is usually prepared “A la Bordelesa” (cooked in its blood with wine, garlic, onion, parsley, oil and salt) or “Al estilo de Arbo” (cooked in wine, like in the town of Arbo, where they have a festivity devoted to this fish). Pntevedra’s savoury pies are famous for their wonderful pastry and fine fillings. Seafood fillings include cod, octopus, cuttlefish and cockle and meat fillings include pork loin or poultry. Partridges and young pigeons are also popular ingredients.
Photo by arquera 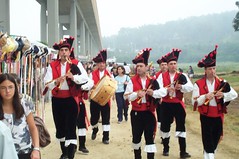 Pontevedra celebrates a vast number of different fiestas, both large and small, throughout the year. Most are of a religious nature and many have evolved over hundreds of years, with fascinating myths and tales associated with them. The best time to visit Pontevedra if you enjoy Spanish festivities is during the months of July and August when there is a celebration of one kind or another almost every weekend.
Saint James’ Day (sometimes known as “the festival of the devil”) falls on July 25th and celebrates the long standing battle between good and evil with music, traditional dress, traditional games, a fair and fireworks. The festival of “Virgen del Carmen” is celebrated on the July 16th and has particular symbolism because it is connected with the ocean and fishing. In some locations throughout the province boat processions are floated out to sea.
Other notable festivals include “San Sebastian de Aldan” in Cangas on January 20th, “Fiesta de Arribada da Pinta” in Baiona on the first Sunday of March and “Romaria do Corpino” in Lalin on the 25th of March. Pontevedra loves its gastronomic festivities and these begin in the first two weeks of April with the “Fiesta of Oysters” in Soutomaior, celebrating oysters from “Arcade”. “Festival of Lamprey” is held in Arbo on the final Sunday of the April and is a celebration of this local favourite crustacean and the recipes used to prepare it. The eating continues in May with the “Fiesta of Salmon” in A Estrada on the third Sunday of the month and then the “Fiesta of Trout” in Pontecaldelas on the last Sunday of the month.
Photo by ReservasdeCoches.com
The Spanish Blog