Orense is situated in Galicia in the northwest corner of Spain extending over Portugal. Galicia, consists of four provinces: La Coruna (including Santiago de Compostela), Pontevedra, Lugo, and Orense. The Orense landscape is a rain-swept land of grass and granite, much of its coastline gouged by fjord like inlets. The area is steeped in Celtic tradition and in many areas its citizens speak “Gallego” (Galician) which is not a Spanish dialect, but a completely separate language.
Galician is a language of the Western Ibero-Romance branch, spoken in Galicia, as well as in small bordering zones in the neighbouring autonomous communities of Asturias and Castile and León and in Northern Portugal. Galician and Portuguese were, in medieval times, a single language which linguists call Galician-Portuguese, Medieval Galician, or Old Portuguese, spoken in the territories initially ruled by the medieval Kingdom of Galicia.
Orense is located on both banks of the Minho (Miño) River at an elevation of 128 m above sea level. The city has a microclimate that brings abundant rainfall and allows for verdant vegetation on the nearby hills. Winters are mild with lows rarely falling below zero degrees Celsius. Due to the location in the river valley, summers can be quite hot, often equalling temperatures of Andalusia. Many local families have apartments on the coast to escape the heat of July and August.
Photo by Victor Hermida
The origin of Orense can be traced back to the Romans and the presence of prized hot springs called “Burgas” which can still be seen today. It was also an important fortification necessary to protect one of the easiest points to cross the Miño River. The Romans made quite an impression on the Galicia region. The Roman walls around the city of Lugo and the Tower of Hercules at La Coruna are part of that legacy.
After the Romans, Orense was part of the “Suebi” kingdom during most of the 5th, 6th, and 7th centuries. The “Suebi” (or “Suevi”) were a group of Germanic peoples who were first mentioned by Julius Caesar in 58 BC and remained a periodic threat against the Romans on the Rhine until towards the end of the empire. Orense was later destroyed by the Moors in 716. The Moors did quite a lot of damage in Galicia, but were relatively quick to move on to more promising battlefields further south.
The city was rebuilt by Alfonso III of Asturias in about 877. However, the Norse invasions as well as attacks from the Arab warlord Al-Mansur once more laid the city to waste. It was only under Sancho II and his sister Doña Elvira that the city was resettled during the 11th century. The definitive urban impulse did not arrive until the 12th century when Orense became an important centre of services.

Probably the most important monument in Orense is the cathedral: “Catedral de San Martin”. It was founded in 572, rebuilt in the 13th century and is the second oldest in all of Galicia. It occupies the same site as the Suevian basilica that stood there in earlier times. It is Romanesque in structure, but with a mixture of Romanesque and Gothic styles.
Another fabulous Roman remain is the “Ponte Vella” bridge that crosses the river Miño at Orense. It is one of the most remarkable bridges in Spain. With Roman foundations, it was reconstructed by Bishop Lorenzo in 1230 but frequently repaired since then. It has seven arches, a central span of 141 feet/43 metres and is now closed to cars.
“Prazo Maior” is the largest and most important of Orense’s medieval squares and is perhaps the single most impressive part of the city. The square is very much at the geographical and cultural heart of Orense and is surrounded by some truly stunning buildings. It is here that you will find the “Palacio Episcopal”, the city’s oldest working building. This medieval structure also holds the town hall and occupies the site of the city’s first Roman settlement. Today it is a museum and contains archaeological artifacts and works of art.
Photo by Victor Hermida
Orense is the only Galician province without coasts and for this reason bases its gastronomy predominantly on the products obtained from farming and stockbreeding and on fresh-water fish from the rivers Miño and Sil. The province has great trout, eel, shad, salmon and lamprey.
Orense has a wondeful tradition of hand-crafted “Chacina” (cured meat). Products include “Androlla” (similar to “Botillo” – a large sausage), a great variety of “Chorizos” (Spanish sausage cured with paprika) and “Morcillas” (black pudding). Pot roasted suckling goat is also very popular, as well as both winged-game meats and furred-game meats. In Orense you will find woodcock, partridge, pigeon, rabbit, hare, wild boar and roe deer. Orense is a great place to sample the famous Galician “Cocido” (meat, potatoes and chickpea stew) and shoulder of pork with turnip tops.
A world famous chestnut industry has developed in Orense and products such as “Marron Glace” (candied chestnuts) are proudly displayed in the best delicatessens of Spain and the rest of Europe. Another exceptional Orense product is honey. The local farms grow magnificent potatoes and turnip tops and mushrooms are also very abundant in the province. Orense in an exceptional wine region and also produces excellent liqueurs and spirits. Four out of the five Galician Designations of Origin are contained in this province. 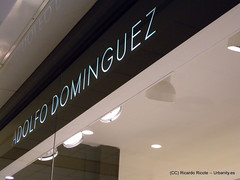 Adolfo Dominguez is one of the most important fashion designers of Spain and he was born in Orense, Galicia, on May 14, 1950. He studied design and cinematography in Paris, with further studies in London, England. He was among the first to inject a new, fresh approach in Spanish fashion, spearheading the rise of a generation of new designers. He became famous among other things for his 1980s motto, “La arruga es bella” – “Wrinkles are beautiful”.
He took over his father’s fashion boutique in Orense in the early 1970s and spent the following years developing his own designs. He finally gained real recognition with a presentation of his work in Madrid in 1981 and became the first Spanish designer to open his own brand-name store in Madrid. This proved extremely successful and it was not long before a chain of outlets popped up across Spain and abroad. It was another first for a fashion designer when the store finally went public and became one of the Madrid stock market’s hottest properties.
His style is urbane, functional, casual and comfortable, making use of loose, natural fabrics. One of his key marketing strategies has been to avoid distribution through multi-brand shops and target the ultimate consumer directly, reducing delivery time and cost to the buyers.
Photo by Ricardo Ricote
The Spanish Blog