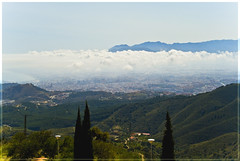 Málaga is a port city in Andalusia, southern Spain, on the Costa del Sol coast of the Mediterranean. Málaga is located 544 km south of Madrid and is 198 km from Andalusia’s capital, Sevilla. It is ranked as the sixth largest city in Spain in terms of population, behind Madrid, Barcelona, Valencia, Sevilla and Zaragoza. The city is a very popular tourist destination, mainly due to its proximity to the Costa del Sol and because the city was the birthplace of Pablo Picasso. Málaga is also conveniently situated to reach other interesting cities such as Seville, Córdoba, Granada, and Jaén by train, bus or car.
Málaga is surrounded by mountains and lies at the foot of the “Axarquía” hills. There are two main rivers, the “Guadalmedina” and the “Guadalhorce” and the inner city of Málaga is just behind the harbour. The quarters of “El Perchel”, “La Trinidad” and “Lagunillas” surround this centre. Málaga relies heavily on agriculture and tourism. The location ensures a typical “Mediterranean” type of climate, with mild weather throughout the year, hot summers and cool, dry winters.
August is a great time to visit Málaga, if that is you can handle the heat! “Feria de Málaga” (Málaga Fair) is the biggest and most well known Málaga festival and it takes place in August. The day consists of live music and dancing in the streets, while at night the fair is moves to the “Recinto Ferial”, consisting of restaurants, clubs, and an entire fair ground of rides and games. Flamenco music is a big part of local culture and the Málaga Fair is a great place to hear some of the best real flamenco.
Photo by tupolev y su cámera
Málaga was founded by the Phoenicians in around 1000 BC. It was later ruled by the Carthaginians, the Romans, the Byzantines, the Visigoths and the Muslims. In the 8th century, during the Muslim Arabic rule over Spain, the city became an important trade centre.
Málaga was one of the Iberian cities where Arab rule lasted the longest. It was part of the “Emirate of Granada” long after most other parts of the peninsula had already succumbed to the “Reconquista”, the medieval Christian struggle to drive out the Muslim Arabs. Málaga was finally conquered by Christian forces in 1487, five years before the fall of Granada.
With the “Reconquista” in full swing after the conquest of Cordoba in 1236, the “Nasrids” (the longest lasting Muslim dynasty on the Iberian Peninsula) aligned themselves with King Ferdinand III of Castile, and formed the official state called the “Kingdom of Granada” in 1238. The “Nasrids” paid tribute to the Christian kings and cooperated with them in the battle against rebellious Muslims under Castilian rule. On January 2, 1492, the last Muslim leader, Muhammad XII surrendered complete control of Granada, to King Ferdinand V and Queen Isabella I, “Los Reyes Católicos”, after the city was besieged. 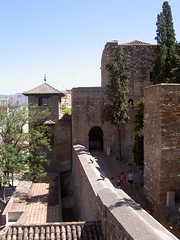 One of the most prominent historical monuments in Málaga is the “Alcazaba”, a Moorish military fortress and regal residence that dates back to the 11th Century. “Alcazaba” derives from the Arabic word “Al-casbah” which describes a walled-fortification in a city. “Alcazabas” remain in Almería, Antequera, Badajoz (the largest), Granada, Guadix, Mérida (the oldest) and Málaga.
Málaga´s “Alcazaba” stands on a hill within the city. Originally, the Alcazaba monument defended the city from pirates. Occupying the eastern hillside that rises from the sea and overlooks the city, the “Alcazaba” was surrounded by palms and pine trees. Like many of the military fortifications that were constructed in Islamic Spain, the “Alcazaba” of Malaga featured a quadrangular plan. It was protected by an outer and inner wall, both supported by rectangular towers.
Other important buildings include the church of Santiago (St James). This is a wonderful example of “Gothic-Mudejar”, the hybrid style that evolved after the “Reconquista” incorporating elements of both Christian and Islamic traditions. Also the church of “Sagrario”, which was raised on the site of the old mosque immediately after Málaga fell to Christian troops. It boasts a richly ornamental portal in the “Isabeline-Gothic” style, unique in the city. The Cathedral and the Episcopal palace were planned with renaissance ideals but fell short of funds and were finished in baroque style. The oldest architectural remain in the city is the Roman theatre which dates back to the 1st century BC and was rediscovered fortuitously in 1951.
Photo by manuelfloresv

Typical Málaga cuisine is also typically Andalusian – light, healthy and prepared with fine fresh Mediterranean ingredients. Andalusia is a big fan of using olive oil for cooking and this has been proven to decrease the possibility of heart diseases, improve blood circulation and digestion. It is also rich in vitamins A, D, E, and K. However, best of all is that olive oil is really tasty and great to cook with.
Málaga is a coastal province and therefore the cuisine of Malaga is dominated by a huge variety of fish and seafood. Málaga’s most typical dishes include roasted or boiled shrimps, fried fish, “Chanquetes” (a small fish in the anchovy family) and “Boquerones” (another small fish marinated in vinegar). Other seafood such as lobster and baby squid is also popular. The fish and seafood in Málaga tastes especially good because it’s always freshly caught. A great dish to try is sardines grilled on bamboo spits over charcoal.
Fish and seafood aside, Málaga is also famous for its cold vegetable soup “Gazpacho”. This is another dish that is popular all across Andalusia and is basically a cold tomato and garlic soup with other blended raw vegetables. It is perfectly refreshing and nutritious for the hot spring and summer Andalusian days.
Photo by nugunslinger

The painter and sculptor Pablo Picasso was born on October 25, 1881 in Málaga and grew up to become one of the very finest artists of the twentieth century. He was the son of an art teacher and a brilliant student who showed clear signs of artistic genius from a very early age. Picasso was a unique inventor of forms, an innovator of styles and techniques, master of various media and one of the most prolific artists in history. He created more than 20,000 works of art in his lifetime.
During his lifetime, the artist went through different periods of characteristic painting styles. The “Blue Period” of Picasso lasted from about 1900 to 1904. It is characterised by the use of different shades of blue underlining the melancholic style of his subjects. His painting style during these years is masterly and convinces even those who reject his later more modern style. Picasso’s “Rose Period” lasted from about 1905 to 1906 and saw him move away from blue to a friendly pink tone with subjects taken from the world of the circus.
Picasso moved to art capital Paris in 1904 where he met other famous artists like Henri Matisse, Joan Miro and George Braques. He became a great admirer of Henri Matisse and developed a life-long friendship with the master of French Fauvism. Together with George Braque and Juan Gris he developed “Cubism”, a style inspired by the works of Paul Cezanne where subjects were reduced to basic geometrical shapes.
In 1937 Picasso created his landmark painting “Guernica”, a protest against the barbaric air raid against a Basque village of the same name during the Spanish Civil War. “Guernica” is a huge mural on canvas in black, white and grey which was created for the Spanish Pavilion of the Paris World’s Fair in 1937. It was exhibited at the museum of Modern Art in New York until 1981 when it was transferred to the Prado Museum in Madrid and later moved to the Queen Sofia Centre of Art, Madrid in 1992. Picasso prohibited the return of “Guernica” to Spain until the end of the fascist rule of General Franco.
Photo by Mark Barry