Lugo is a city in northwest Spain in the autonomous community of Galicia. It is the capital of the province of Lugo, one of Galicia’s four Provinces. The other three Galician provinces are La Coruna, Pontevedra and Ourense. Lugo province may not be one of the most well known tourist destinations in Spain, but it has a lot to offer, including the beautiful walled town of Lugo city, spectacular costal and country scenery, an architectural heritage that spans from the Celts and Romans to the Neo-Classical and Gothic and a culture and cuisine that is typically and wonderfully Galician.
Do not expect to hear many English voices in this part of Galicia. Lugo is relatively unexplored by visitors from outside Spain. It is also unlikely you will find different international cuisines here. The province has its own gastronomy that is good as anywhere else in Spain and it does not feel the need to complicate matters.
Lugo can be easily reached from Galicia’s premier city Santiago de Compostela and, as the region’s largest geographic district, Lugo encompasses a variety of fascinating towns and monuments. You can see the remains of ancient Celtic villages called “Castros” and visit old monasteries and convents. The weather can be harsh so the best times to visit are definitely Spring or Summer, but you can always be guaranteed to receive a warm welcome from the very friendly locals.

Lugo is the only city in Europe to be surrounded by completely intact Roman walls, which reach a height of 10 to 15 metres along a 2117 m m circuit ringed with 71 towers. These walls were built in approximately 260 AD and are now protected by UNESCO as a World Heritage Site. The bridge over the river Minho is essentially of Roman date, though many repairs over the centuries have taken a little from its Roman character. You can walk a-top the full length of the wall, or leave it at any of its numerous stairs which will take you down into Lugo’s older district.
Once inside the walls, the old town has numerous interesting streets with open squares and small gardens. The largest square, surrounded by several grand buildings, is to the west of the old town. This is “Prazo Maior” and houses the Town Hall, a large baroque structure with an impressive fronting constructed in the mid eighteenth century. Other significant squares within the city’s walls are the plaza of “Santo Domingo” in the town’s centre and the plaza of “Santa Maria” behind the cathedral. Lugo’s cathedral is dedicated to St. Froilán and was built in about 1129, though the actual main facade and towers date only from 1769. This cathedral enjoys the extraordinary privilege of having the Blessed Sacrament perpetually exposed.
Besides the Roman walls and the cathedral, Lugo also offers the “Museo Provincial” (with an impressive display of Galician art), the Palace of the Arts (“Circulo das Artes”), the gardens of “Rosalia de Castro” just outside the walls perimeter and the spa. Lugo’s benefits from natural thermal springs and the early Roman settlers made good use of this pre-heated water by creating a city spa complex. Part of this spa still remains and is called the “Barrio del Puente” and is open to visitors. Bathing in warm waters compensated the Romans for the colder climates they had to endure when they invaded northern territories such as Galicia.
Photo by uveic
Lugo is said to have been founded by the Celts of the Cult of Lugh, the bearer of the Grail and God of Light. It was later conquered by Paulus Fabius Maximus in 13 BC and called “Lucus Augusti”. It was the main town of the tribe of the Capori, located in what was the Roman province of “Hispania Tarraconensis”.
Lugo was in fact the most important Roman town in what became Galicia, although it was relatively small. During the Roman period Lugo held the seat of a “Conventus”, one of three in “Gallaecia” and later became one of the two capitals of “Gallaecia”. It was, of course, the Romans who built the large wall to protect the city.
Lugo was centrally situated in a large gold mining region, which during the Roman period was very active. The “Conventus Lucensis” began at the river Navilubio, and contained 16 different populations; besides the “Celtici” and “Lebuni”. Though these tribes were not powerful, there were aabout 166,000 freemen. The city stood on one of the upper branches of the “Minius” (modern day Minho), on the road from “Bracara” to “Asturica” and had some famous baths, near from the bridge across the Minho.

Lugo is a privileged province, where the land will grow almost anything. The fields provide wonderful fruits and vegetables and the livestock raised in its fields and meadows is excellent. Lugo’s coast supplies great seafood, including the famous “Burela” lobster, huge hakes, anglerfish and sea-bass. Smaller species like sardines are also an important part of the culinary tradition here, as well as wrasse, pollack, ray and octopus. Most of the time, white fish ends up cooked “A la Gallega”, with potatoes, peas and “Allada” sauce, a typical Galician sauce that is reddened with paprika and flavoured with garlic. The salmon, trout and eel from the local rivers also feature prominently on local menus.
Typical cuts of meat in Lugo are ox T-bone steak, veal chops, hock and also shin and brisket, essential for a good “Cocido” (meat, potato and chickpea stew). Pork is popular and there is a fantastic array of different sausages to choose from, such as the paprika-cured “Zorza”. With regards to poultry, Lugo is very proud of its magnificent Capons from Vilalba and there is an annual fair just before Christmas that is devoted to these birds. Lugo also has a strong hunting scene, with lots of game species such as partridge, woodcock, pigeon, rabbit, hare, wild boar even roe deer.
In Lugo they produce cheeses that fall under the Designations of Origin “Arzúa-Ulloa”, “Tetilla”, “San Simón” and “O Cebreiro” and it is also a great wine-region protected by the Designation of Origin Ribeira Sacra. The main wine areas are on the banks of the rivers Sil and the Miño, including the renowned wine-producing towns of Chantada, Quiroga and Sober. Red wines are made from “Mencía” grapes and white wines from “Albariño” and “Godello” grapes. These make a perfect companion to Lugo’s glorious cuisine and can be followed up with some lovely local spirits such as the famous “Portomarín” or the herb, morello cherry and coffee liqueurs.
Photo by tonio888 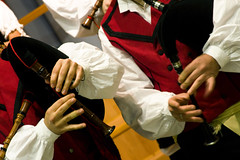 In comparison with other parts of Spain, the province of Lugo has relatively few annual festivities. This is partly because Lugo has fewer pilgrimage sanctuaries than the other Galician provinces and also because there less connections and documented visits from Saints.
Most of Lugo’s festivals take place between July and August. However, “Semana Santa” and “Corpus Christi” come earlier in the year and are also well celebrated as they are throughout the Christian world. “Fiesta de San Froilan” is another big festival and this takes place during the first two weeks of October and attracts visitors from the surrounding region and beyond. It includes market stalls, traditional Galician products and is centred around making preparations for the approaching winter months. The eating of octopus and partridge is popular during this time.
“Ofrenda do Reino de Galicia” or “Santisimo Sacramento” is a lively festival that includes traditional Galician bagpipers and has the involvement of the cities of Tui, Mondonedo, Betanzos, A Coruna, Lugo, Ourense and Santiago de Compostela. All of these places were part of the original ancient Kingdom of Galicia. “San Juan” festival is celebrated in the town of Sarria and “Santa Maria” festival is celebrated in most of the towns and villages of Lugo province.
Photo by clspeace