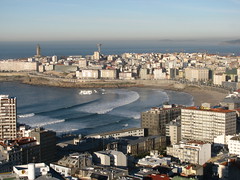 La Coruña (A Coruña in Galician) is the second largest city in Galicia in northwest Spain. The city is also the capital of the La Coruña Province and was the capital of the whole of Galicia between 1563 and 1982 before Santiago de Compostela was given the honour. La Coruña is a busy port city and provides the distribution point for agricultural goods from the region.

The Romans came to the region in the 2nd century BC and quickly made the most of the city’s strategic sea trade location. The city was known as “Brigantium”. In 62 BC Julius Caesar arrived in search of the metal trade and established commerce with the regions that would eventually become France, England and Portugal. The city grew steadily, with the principle growth seen mainly during the 1st and 2nd centuries when the “Torre de Hércules” was built. The “Tower of Hercules” still stands today and is one of the most important lighthouses in Spain. The structure is 55 metres tall and almost 1900 years old. It was rehabilitated in 1791 and is the oldest Roman lighthouse still to be used as a lighthouse. It is a National Monument of Spain and since 27 April 2007 has been nominated as a UNESCO World Heritage Site.
After the fall of the Roman Empire, La Coruña was still a commercial port connected to foreign countries, but contacts with the Mediterranean were slowly replaced by a more Atlantic-oriented commercial strategy. The process of de-urbanization that followed the fall of the Roman Empire affected La Coruña greatly and between the 7th and 8th centuries AD the city was no more than a little village of laborers and sailors. There is no archeological evidence in the La Coruña area of Arabian occupation, but the city definitely had many Viking visits. During the 9th century there were several Viking attacks on the city that was at that time called “Faro Bregancio”. In the year 991, King Vermudo II began the construction of defensive military positions on the coast. A fortress was built in the ruins of the “Torre de Hércules” which had a permanent military guard.
Photo by pabloherrero
In 1208 Alfonso IX named the city “Crunia” and granted it various trading privileges such as disembarking and selling salt without paying taxes. “Crunia” enjoyed a period of extensive growth and prosperity until it was given the title of “City” in 1446 by Xoán II. During the Modern Ages, La Coruña was an important port and centre for the manufacturing of textiles.
In 1804 the National Factory of Cigarettes was created and during the 19th century other businesses such as glass, textiles and matches were established, but it was the sea and migration businesses that attracted Catalan, Belgian, French and English inversions. The Bank of A Coruña was founded in 1857. The new provincial division of 1832 also influenced the economic development. At the beginning of the 20th century, La Coruña had about 45,000 inhabitants.
After the Spanish Civil War supporters of the Republic were forced to go into exile, and those who remained in the country suffered repression by the new government. During this time, the Nazis murdered 13 citizens of A Coruña in Manthausen. In the year 1970, ETA almost managed to assassinate Franco in La Coruña, but narrowly failed at the last moment. From 1983 to 2006 the mayor of the city was Francisco Vázquez Vázquez (PSOE). The city became devoted to services, but Francisco Vázquez Vázquez was also criticised because of his offenses to the Galician language.

La Coruña’s most famous landmark is its Roman “Torre de Hércules” (The Tower of Hercules) which is a lighthouse that has been in continuous operation for nearly 2,000 years. The name “Corunna” is supposedly derived from the “Columna”, meaning “Column”.It assumed its present form in the 18th century when it was given a neoclassical restoration by naval engineer Eustaquio Giannini during the reign of Spanish King, Charles III.
The Romans who conquered this region of Spain believed it to be the end of the earth, as described in “Finisterra”. This region is notorious for shipwrecks, earning the name “Costa de la muerte” (“Costa da Morte” in gallego) which means “Death Coast”. The shore of the “Costa da Morte” is exposed directly to the Atlantic Ocean without any real shelter and is an area that has been impacted by a number of oil spills, including the spill from the Prestige in 2002.
La Coruña is also well-known for its beautiful glazed window balconies called “Galerías”. Originally, this type of structure came about as a naval architecture solution for the challenging Galician weather. The shape of the back of a war ship was incorporated into the buildings and very soon many other sea ports in northern Spain were adding these glazed window balconies to their houses.
Photo by jlcernadas
La Coruña is famous for its top quality cuisine made from a wide variety of fantastic local ingredients. Galicia is probably best known for its fish and seafood, but the meat and vegetables of La Coruña are in just the same league of excellence. There is also no problem finding a decent local wine to wash down your meal. Favourites include “Albariños”, “Betanzos”, “Rías Baixas”, “Ribeiro” and “Valdeorras”. La Coruña’s cheeses and desserts are equally fine. Favourite desserts include cheese curd with honey and pancakes, cream cheese and almond cake,
The streets of La Coruña offer a huge variety of different eateries, from the most traditional rustic taverns to the most elaborate modern restaurants. You can find excellent tapas bars in streets like San Juan, Barrera, Olmos or La Franja. La Coruña tapas can be simple or elaborate, but none will disappoint. Octopus, tripe and squid are popular tapas ingredients.
Some recommended dishes include “Raxo” and “Zorza” (both pork dishes) Empanada Pie and “Caldo” (broth). The seafood on offer is incredible – barnacles, velvet crabs, every kind of lobster, scallops and clams, spider crabs, oysters, mussels and cockles. This is not forgetting the fish that is freshly unloaded daily. Hake, monk fish, turbot, cod, tuna fish, sardines, sea bass, salmon, eels and lamprey are just of some of the ingredients that will be lovingly introduced to the local soups and pies.

La Coruña’s principal football club is “Deportivo de La Coruña”. The club was founded in 1906 and holds its home games at the “Riazor” stadium which has a capacity of 34,600 spectators. La Coruña local, José María Abalo, introduced football to the city in 1902 after returning to his hometown after studying in England. He and his friends started playing in a local bullring and they had little idea just how popular the game would become.
“Deportivo” played in various Galician leagues until 1928, when the Spanish league was formed. They failed to qualify for the “Primera División” and began playing in the “Segunda División”. They remained in the “Segunda División” until 1941 when they were finally promoted to the “Primera División”. The club has definitely had its ups and down throughout its hundred years history. Its greatest moment came when the club won the first League title of their history in the season of 1999-2000 and brought Champions League matches to the “Riazor”. At its lowest point the club has found itself riddled with debt, floundering at the foot of the table, losing game after game.
“Deportivo La Coruña” have always played in their famous blue and white stripes, but it was not until 1912 that the club made these colours official for matches. There is, and has always been, a strong rivalry with neighbouring Galician club “Celta de Vigo”.
Photo by jlcernadas