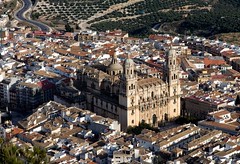 Jaén is a city in central southern Spain and the capital of the province of Jaén. It is located in the autonomous community of Andalusia and the inhabitants of the Jaén are known as “Jiennenses”. The city is located close to the Santa Catalina hills and the streets are steep and narrow in the historical central city district. The city of Jaén is the administrative and industrial centre of the province. Industrial establishments in the city include chemical works, tanneries, distilleries, cookies factories and textile factories.
Jaén suffered tragically during the Spanish Civil War that lasted from 1936 to 1939. The majority of the city’s residents were on the side of the republicans and according to reports on one terrible occasion non-republicans were loaded onto a train and sent to Madrid where they were shot mercilessly as soon as they reached the south of the city. There were so many prisoners that Jaén prison reached the point of overflowing and the local Cathedral was called into use as a backup. Executions were carried out almost daily.
The post-war period was especially harsh for “Jiennenses” as supporters of the vanquished republicans. The latter part of the twentieth century thankfully saw Jaen flourish with its two major industries of tourism and olive oil production going from strength to strength.
Photo by afloresm
Jaén is an inland city and for this reason it is best known for game and fish from local rivers, however the typical local cuisine is extremely varied. Trout, quail and deer are local favourites.
Speciality dishes include “Pipirrana” (tomato, green peppers, breadcrumbs, garlic shoots, olive oil, vinegar, salt and hard-boiled egg), “Espinacas de Jaén” (spinach, garlic, croutons, spiced sausage, bayleaf, egg, orange zest and vinegar), “Trucha de Jaén” (trout, butter, chunks of ham with bacon, parsley, white wine and salt) and “Ajo blanco de Jaén” (raw almonds, olive oil, eggs, garlic, salt, vinegar and water). The “Pipirrana” is basically just a fresh salad, but it becomes something special due to the wonderful dressing made of local olive oil, green pepper, garlic and salt. Jaén is one of the biggest producers of olive oil in the world and the fantastically tasty high quality oil really brings local salads to life.
“Tapas” is a major part of Jaén and “Tapeo” is still very common, where people pop from one bar to the next for a chat, a small beer and a “Tapa”. “Tapas” are small well priced plates of food loving prepared and steeped in tradition. They are the perfect way to sample a little of everything and really get to know the local cuisine. Regarding Jaén sweets, rice pudding is very popular, also “Gachas dulces” (olive oil, flour, milk, sugar, honey, vanilla, orange peel, cinnamon) “Pestiños” (olive oil, flour, sugar, orange zest, cinnamon), “Ochíos” (olive oil, flour, egg, sugar) and “Gusanillos” (olive oil, orange juice, flour, almonds, sugar). 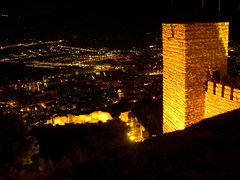 Jaén is also known as the “Holy Kingdom” because more or less the very same area we know today as Jaén Province was long ago a kingdom first ruled by the Moors and then by the Christians.
There is evidence in local archaeological sites and rock paintings that Jaén was civilised as early as the Copper Age. The Iberians and the Carthaginians ruled the province before the Romans took over in 207 BC. Jaén was then an impressive, even opulent, city. The Visigoths followed the Romans, but they didn’t make a huge impact on the city as Jaén was seen as only a peripheral possession for them. However, the Arabs that followed later made a huge changes and ruled for five centuries until 1246 when the Christians came and conquered. The beginning of the 19th century was a traumatic time for the people of Jaén as the French invaded and took over during what is known as the “War of Independence”.
The modern face of Jaén is marked most significantly by its Moorish and Christian past with most of its most prominent monuments standing in testimony either to the great Moorish rulers or the Christians who have been building the city ever since.
Photo by cloudsoup
Jaén Cathedral is one of the most important Renaissance style cathedrals in Spain. Work began on its construction in 1570 and it was completed in 1802. Due to the length of time it took to construct the cathedral many different artistic styles have been incorporated in its design, not only Renaissance though it is the most prominent style. Andrés de Vandelvira was the most important architect and is recognised as the greatest exponent of Andalusian Renaissance.
The cathedral is dedicated to the Assumption of the Virgin and was built to shelter the relic of “The Veil of Veronica” that is kept in a shrine by the high altar and is annually exhibited to the people on Good Friday and on the Feast of the Assumption. “The Veil of Veronica” is also known as “The Holy Face of Jesus” and there are at least five others in existence which bear a marked resemblance to each other and which are claimed to be the original Veil. The copy housed in Jaén cathedral probably dates back to the fourteenth century and originated in Siena.
Another important Jaén monument is “El Castillo de Santa Catalina”, a castle (now a popular hotel) which sits on the top of the hill overlooking the city. Originally an Arabic fortress stood in the same spot and some of its remains still exist. The current castle was built by the Christians led by Ferdinand III of Castile when they conquered the city in 1246. The Arab baths in Jaén are one of the most significant remnants of the Moorish era of Andalusia and the largest Arab baths preserved in Spain. They are found under another important city monument, “Villardompardo’s Palace”. Other important monuments in Jaén include the Museum of Arts and Popular Customs, the International Museum of Naïf Art, San Andrés’ Chapel, the Provincial Museum of Jaén and Saint Ildefonso’s church.
Jaén is a great place to experience the Spanish enthusiasm for fiestas. Almost every month of the year is graced by at least one wonderful festivity or celebration. In January you can experience “Día de San Antón”. This is a single day celebration that as with most Spanish fiesta is big on eating and dancing. However unlike other fiestas revelers can work off their indulgences by racing in the Saint Anthony’s Day race which takes place at night and is lit up by the torches that the participants carry to the finish line. February sees the Jaén Carnival and of course in March or April comes “Semana Santa” (Holy Week) when the streets are jam-packed with families watching the solemn, beautifully prepared religious processions.
In May Jaén puts on “ExpoOliva” – an exhibition of olive oil. Olive oil is big business in Jaén and the industry is an integral part of local culture and gastronomy. “ExpoOliva” is the perfect opportunity to get to know just about everything there is to know about olive oil production both in Jaén and around the world. June sees “Virgen de la Capilla Festival” which includes a very special attraction: the “Lagarto Rock Contest”. Jaén Town Hall organises this contest every year to offer young musicians the chance to win their first album recording.
“Fería de San Lucas” is held in October, very late by Spanish fiesta standards. It is often rained on, but never rained off. In November there is “Día de Santa Catalina” (day of the patron saint of the city) when locals head to hills under the Santa Catalina castle to have barbecues and roast sausages and sardines