Watch full episodes of Impares here on the Antena 3 website 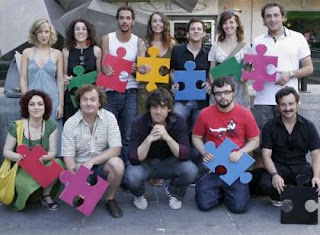 Impares is a comedy sketch show that was created originally for the Spanish free channels and then quickly made the jump up to the main public channel Antena 3 due to its popularity. It features over 80 actors and reflects a series of meetings between the clients of a dating agency. Each half-hour chapter portrays the evolution of three dates and the results are never quite what you would expect. The viewer is treated to love, heartbreak, triumph, disappointment and disaster, all in equal measure.
Shot on a shoestring budget, do not expect special effects, spectacular footage from cranes or well known faces among the cast – the strength of this comedy series is its clever, short dialogues and quirky subject matter. Much of the footage is shot in a very straight forward way out and about in the streets of Madrid. This adds a sense of realism to the dates that we follow and of course also saves the series a huge amount of cash.
Impares premiered on August 4th 2008 and features actors and actresses such as Aitor Luna, Antonio Muñoz de Mesa, Elsa Pinilla, César Lucendo, Javier Godino, África Luca, María Ballesteros, Nacho López, Sandra Dominique, Susana Martins and José Troncoso. The success of the show illustrates that it does not have to be all about big money and big names to find TV success and that anything is possible with a good idea, dedication and passion.