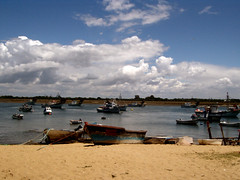 Huelva is a city in Andalusia in south west Spain. It is the capital of the province of Huelva and is located along the Gulf of Cadiz coast, at the meeting point of the Odiel and Rio Tinto rivers.
It was known as “Onoba Aestuaria”, “Onuba” or “Onoba” during Roman times. The city had a mint and many old coins have been found in the area bearing the name of the town as “Onuba”. The Arabs renamed it “Walbah” during their rule between 712-1250. It suffered substantial damage in the 1755 Lisbon earthquake.
The province of Huelva is bordered by Portugal, the provinces of Badajoz, Seville, and Cádiz, and the Atlantic Ocean. The economy is largely based on agriculture and mining. The famous Rio Tinto mines here have been worked since before 1000 BC. They were the major source of copper for the Roman Empire. British companies resumed large-scale mining in 1873 and the district is the namesake of the Rio Tinto Group. The province contains Palos de la Frontera and Moguer, where Christopher Columbus sailed out of on his first voyage in 1492 and also shares the “Parque Nacional de Doñana”.
Photo by chang2034 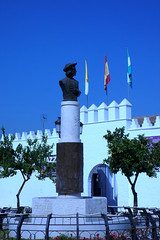 Some of the biggest tourist draws to Huelva are the Columbus sites that include the city of Huelva itself, Moguer, Palos de la Frontera and the Rábida Monastery. The explorer Christopher Columbus lived between 1451 and 1506 and his voyages across the Atlantic Ocean – funded by King Ferdinand and Queen Isabella of Spain – led to general European awareness of the American continents in the Western Hemisphere.

He was probably not the first person from Europe to reach The Americas, but it was Columbus who initiated widespread contact between Europeans and indigenous Americans and was responsible for initiating the process of Spanish colonization which foreshadowed the general European colonization of the “New World.” The term “Pre-Columbian” is usually used to refer to the peoples and cultures of the Americas before the arrival of Columbus and his European successors.

La Rábida, in Huelva, is where Columbus sought the aid of the Franciscan brothers to advance his project of discovery. They introduced him to local rich sailors and arranged a meeting in Seville with King Ferdinand and Queen Isabella. Thanks to these meetings, Columbus was able to arrange his first voyage, using local resources and crew. Legend states that Columbus received advice on how best to undertake a western passage by speaking with Alonso Sánchez, a sailor from the city of Huelva. In the Huelva area, Columbus exchanged ideas, explored competing theories and gained the political and economic support that had been previously denied to him by other European monarchies.
Photo by jl FILPO 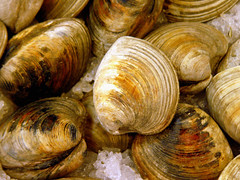 Huelva is a busy port and so it is not surprising that the staple food on offer in the bars and restaurants is a wonderful variety of fresh fish and shellfish, much of which is locally caught.
Huelva is famous for its “Gambas Blancas” (white prawns) and many types of different clams such as “Almejas”, “Chirlas” and “Coquinas”. Prawns are captured in the river mouth and deep-water pink shrimp off the coast, the latter being unmistakable because of the rosy colour that tints their backs when they are cooked. Tuna, Snapper, Sea-bass, Sole and Red Mullet are some of the species caught off the coast of Huelva, from Ayamonte to Punta Umbría. Local speciality dishes include “Rape al vino blanco” (monkfish in white wine) and “Raya al pimentón” (skate with paprika). Also popular are the pork and ham products from “Sierra de Aracena” to the north of Huelva. Years of Arab rule can be clearly seen in Huelva’s confectionery and pastries. They commonly combine the fantastic mountain honey with the delicious almonds from the coast. Marzipan and Macaroons are big local favourites.
As for Huelva wines, the Designation of Origin “Condado de Huelva” offers some excellent fruity, young wines that are part of a traditional selection dominated by full-bodied wines. The “Condado” region is located to the east of the city, halfway to Seville. The refreshing “Condado” dry white wines are the perfect accompaniment to seafood. Excellent vinegar is also produced from old wine. Excellent liqueurs are also readily available and provide a perfect assistance in digesting heavy meals. The “Morello” cherry liqueurs, with low alcoholic content and excellent taste, made in La Sierra, Cuenca Minera and El Condado are definitely worth sampling.
Photo by ktylerconk 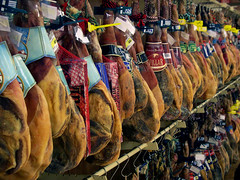 The highest quality cured hams, quite possibly in the entire world, are produced in Siera de Huelva: in Jabugo, Cortegana, Cumbres Mayores and Repilado. Pure-breed black Iberian pigs are fed exclusively on acorns in Spanish meadows. In recent years, this population of Iberian pigs has greatly increased to satisfy the new demand for top quality meat and cured products.
The most commonly accepted theory is that the first pigs were brought to the Iberian Peninsula by the Phoenicians from the Eastern Mediterranean coast where they interbred with wild boars. This cross gave rise to the first Iberian breeds whose origins, in this case, can be traced back to about the year 1000 B.C. This race has many qualities, including a great capacity to accumulate fat under its skin and between the muscular fibres. This fat produces the typical white streaks that make the hams so special.
The Iberian pig is dark in colour, ranging from black to grey, with little or no hair and a lean body. It is often known by the familiar name “Pata negra” (black hoof). The animals live freely and therefore burn more calories than other species of pig. At least a hectare of healthy oak wooded meadow is needed to raise a single pig. This area is called “Dehesa” and ideal “Dehesa” is a richly diverse habitat with four different types of oak that are crucial in the production of prime-quality ham. The bulk of the acorn harvest comes from Holm oak, but the season is stretched out with other harvests of Spanish oak, Gall oak and Cork oak. Between them the acorn-eating period can last from September to April and each pig eats over twenty thousand acorns a day.
Photo by cloudsoup 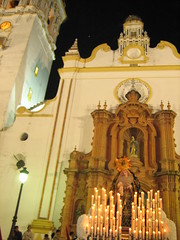 Huelva has some beautiful old churches and convents and these include “Ermita de la Soledad”, “Iglesia de la Concepción” and “Iglesia de la Milagrosa”.
“La Soledad” is found on “Calle Jesús de la Pasión” and was first erected in the early 1500s as a church for the neighbouring “Hospital de la Misericordia” founded in 1516. The two lateral doors were designed by the architect Antonio de Figueroa in around 1771, while the main door and belfry were designed by the Huelva architect José Álvarez. Under the altar is a crypt, built in 1654, that contains the family vault for Pedro de Guzmán y Quesada.
“La Concepción” church is located on “Calle Concepción” and was built over a period spanning two centuries from 1515. It is a mix of Mudéjar and Baroque styles and contains several very valuable paintings by the artist Francisco de Zubarán. The church has recently needed major restoration work due to damage caused by the erection of new modern buildings around it. The magnificent Baroque bell tower is probably the most striking feature. “La Milagrosa” situated on “Calle Rábida” just south of “Plaza de las Monjas” is one of the few examples of neo-gothic architecture in the Huelva province. It dates from 1929 and was designed by the architect José María Pérez Carasa. This church was one of the few buildings at the time to use concrete in its construction. It has undergone various stages of restoration, having been damaged in the Civil War and nearly destroyed by the big 1969 earthquake. Its most interesting features are its neo-gothic façade with a single, central bell tower, the stained glass windows above the apse and its ornate gilt altarpiece of “Nuestra Señora Estrella de la Mar”.
Photo by PiRJaCo