Girona is a city located in the northeast of Catalonia, Spain at the confluence of the “Ter”, “Onyar”, “Galligants” and “Güell” rivers near to the French border. It is the capital of the province of the same name and of the comarca (shire or county) of “Gironès” which borders Selva, Baix Empordà, Alt Empordà, Pla de l’Estany and Garrotxa.
Girona is a beautiful, walled city that dates back to Roman times and you get a real feeling for its history just by walking through its ancient streets. The old quarter is located within the Roman city walls. The province of Girona is spectacular, with its breathtaking coastline of small coves and natural beaches surrounded by rocky mountains covered by pine trees. There are a number of delightful and tranquil small fishing villages where you can relax and eat extremely well. Skiing is very popular here in the interior mountain regions and there are also numerous Roman churches and monasteries to visit (Puigcerdà, Ripio, Sant Joan de les Abadesas).
Girona has a mild climate. The winters are cold and the summers are hot. In winter temperatures can drop to below -5°C (23°F) often due to winds coming from the Pyrenees. In the summer temperatures soar to about 30-40°C (86-104°F) in the high season of July & August. Rain and heavy thunderstorms are common in winter and spring, as is frost in winter, making temperatures seem colder than they actually are.
Photo by Amir K.
Girona is the ancient “Gerunda” and the first inhabitants in the region were Iberians. Later, the Romans built a citadel there, which was given the name of “Gerunda”. The Visigoths ruled in Girona until it was conquered by the Moors. Finally, Charlemagne reconquered it in 785 and made it one of the fourteen original countships of Catalonia, taken temporarily from the Moors, who were finally driven out in 1015. Guifré I incorporated Girona to the countship of Barcelona in 878 and Alfonso I of Aragón declared Girona to be a city in the 11th century.
Girona had a flourishing Jewish community during the the 12th century with one of the most important Kabbalistic schools in Europe, but all Jews were eventually expelled from Catalonia in 1492 by the Catholic Kings. Today, the Jewish ghetto one of the best preserved in Europe and is a major tourist attraction. On the north side of the old city is the “Montjuïc” (“Hill of the Jews” in medieval Catalan) where an important religious cemetery was located.
In its turbulent history, Girona has undergone twenty-five sieges and been captured seven times. It was besieged by the French royal armies under Marshal Hocquisicourt in 1653, under Marshal Bellefonds in 1684, and twice in 1694 under De Noailles. In May, 1809, it was besieged by 35,000 French Napoleonic troops and held out obstinately under the leadership of Alvarez until finally the French conquered the city after 7 months of siege. The defensive city walls were demolished at the end of the 19th century to allow for the expansion of the city. In recent years, the missing parts of the city walls on the eastern side of the city have been reconstructed. It is called the “Passeig de la Muralla” and now forms a tourist route around the old city.

Girona is a wonderful and very easy city to explore on foot as it is not too large. A good starting point might be the northern edge of the city, where the Roman city wall begins and you can take a route called the ‘Passeig Arqueològic’ (the archeological walk). Within the wall you can still see the remains of a Roman road, built to connect Rome to Tarragona and continuing along the wall you can visit the old quarter. The ancient portion of the city, with its once-formidable fortifications, stands on a steep hill. The bastions of the walls which have withstood so many sieges are still to be seen.
Girona cathedral stands on the same site as the original ancient cathedral that was also once used by the Moors as a mosque. The present cathedral, by architect Jaume Fabre, is one of the finest examples of Gothic architecture in Spain. It is approached by eighty-six steps and an aisle and chapels surround the choir, which opens by three arches into the nave, of which the pointed 73 foot stone vault is the widest in Christendom. There is also a marble throne known as the seat of Carlomagno which was built when his troops took over the city in 785AD and a tapestry dating back to the 11th – 12th century called “The Creation”.
The Benedictine church of Sant Pere de Galligants is of ancient Romanesque style and today houses the city´s Archeological museum. Other places worth visiting include the Arabic baths, Art Nouveau buildings including the Farinera Teixidor by Rafael Masó and the old Jewish quarter. Most traces of Girona’s rich Jewish history were wiped out when the Jews were expelled from Spain in 1492, however some remain. On Carrer de Sant Llorenc, the doorway of an old building has a rectangular indentation which once held a mezuzah. Further along are the “Bonastruc ça Porta” centre and the Catalan Jewish Museum. The “Bonastruc ça Porta” project started in the 1970s, when it became fashionable to renovate properties in the old town. Clearing away nearly 700 years of construction, remains were discovered of what turned out to be the medieval Yeshiva founded by Nahmanides.
Photo by art_es_anna
Girona offers breathtaking coastline and vibrant countryside and this mixture is perfectly reflected in one of the most traditional Girona dishes: the “Surf & Turf” which consists of fish & seafood mixed with products from the land. The area is renowned for the quality of its meat, sausages, garden produce, oils and fish and seafood delicacies. These wonderful products can be washed down with the the cavas and wines of the Empordà-Costa Brava appellation d’origine, many of which have achieved the well-deserved D.O. standard.
As with most parts of Spain, Girona retains a strong sense of tradition in its cuisine, but this is not at the expense of at the same time pushing new boundaries in modern gastronomy. Girona has managed to adapt to new tastes and create highly innovative and artistic dishes, to the extent that the cuisine of its local chefs is recognised in the world’s most prestigious food guides. “El Bulli” restaurant located on “Cala Montjoi Roses” is headed by the famous and one of the most exciting chefs in Spain Fernando Adria. The restaurant carries the honour of receiving a 3 star Michelin accolade.
Girona and particularly the region of L´Empordá is famous for its fine and hearty cuisine. The local organic farms yield tomatoes, aubergines, onions, courgettes and peppers of excellent quality that constitute the essential elements of many dishes. Other local favourite ingredients are goose, superb wild mushrooms that can be picked throughout the year and the fruits that compose many of the sauces. 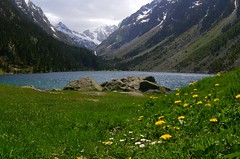 “Pirineu de Girona” is a beautifully scenic land with wonderful villages and numerous sites of historical interest to visit. The Pyrenees Mountains are of course synonymous with skiing, with five ski resorts, four Alpine and one Nordic, a mild climate, clear skies and sunny days, but there is a lot more to do and admire in the “Pirineu de Girona” than just ski.
There are some magnificent high mountain lakes and Romanesque hermitages. Also medieval villages such as Besalú or Santa Pau, or places that combine impressive crags with Romanesque ruins, such as Oix and Beget, enchanting valleys like Camprodon or charming peaks in Cerdanya and Núria. The flora and fauna feature unique local species and the medieval spirit of old Catalonia can still be breathed. But heritage, peace and tranquillity are not all that Pirineau has to offer. Fans of physical activity can practise all kinds of mountain sports here: from trekking to horse riding to hot air ballooning.
Similarly, the conservation of natural areas like Garrotxa Volcanic Area Natural Park or Cadí-Moixeró Natural Park has gone hand-in-hand with the restoration of all kinds of traditions, not only related to festivities, folklore or crafts, but also to cuisine and culture. Thus, museums, markets, music festivals and fairs are at everybody’s fingertips; even more so now that improved roadways have made access to the Girona Pyrenees far easier, connecting the region via rapid transit with the large urban centres of Catalonia, Andorra, Southern France.
Photo by AlphaTangoBravo / Adam Baker