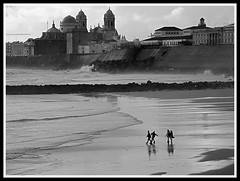 Cádiz is the capital of the south western Spanish province of the same name, one of eight which make up the community of Andalusia. Cádiz is the oldest continuously-inhabited city of the Iberian Peninsula and possibly of all south west Europe. It has always been a very important port and the principal home port of the Spanish Navy since the accession of the Spanish Bourbons in the 18th century. It is a unique location, a narrow spit of land hemmed in by the sea, that experiences fierce winds and good surfing waves.
The city was supposedly established by the Phoenicians in 1104 BC, who named it “Gadir” (“wall”/”compound”/“stronghold”). Later, the Greeks knew the city as “Gadira” or “Gadeira”. According to Greek legend, “Gadir” was founded by Hercules after he slew “Geryon”, a monstrous warrior-titan with three heads and three torsos joined to a single pair of legs. As late as the early third century, a large earthen mound near Cádiz was associated with “Geryon’s” final resting-place. In Latin, the city was known as “Gades” and the local residents of Cádiz are still known as “Gaditanos”.
The older part of Cádiz is characterised by the antiquity its neighbourhoods and some well preserved historical monuments. Among the areas worth visiting are “El Populo”, “La Viña”, and “Santa Maria”. There is a significant contrast between the old quarter and the newer areas. While the Old City’s street plan consists largely of narrow winding alleys connecting large plazas, newer areas of Cádiz typically have wide avenues and more modern buildings. Additionally, the city has numerous wonderful parks with exotic plants and giant trees supposedly brought to Spain by Columbus.
Photo by Sidi Guariach 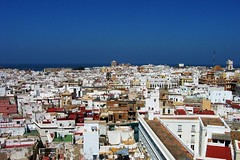 In around 500 BC Cádiz was under the control of Carthage (an ancient city in present day Tunisia) and became a base of operations for Hannibal’s conquest of southern Iberia. In 206 BC, the city fell to the Romans who changed the city’s name to “Gades”. It soon became a very successful and important Roman naval base, in fact one of the most important cities in the entire Roman Empire by the time of Augustus. However, Gades’s commercial importance began decline as the Roman Empire gradually dissolved. In the fifth century Roman power in southern Spain was overthrown by the Visigoths and they destroyed almost all of the original city. Under the rule of the Moors, between 711 and 1262, the city was renamed “Qādis”. Christian King Alphonso X of Castile finally took control in 1262.
Cádiz experienced a renaissance period during the “Age Of Exploration”. Columbus sailed from Cádiz on his second and fourth voyages and the city became the home port of the Spanish treasure fleet. As a result, the city became a target of numerous raids and attacks. In April 1587 a raid by the Sir Francis Drake occupied the harbour for three days, capturing six ships and destroying 31 others as well as a large quantity of stores. The attack delayed the sailing of the Spanish Armada by a year. More British assaults followed, launched by such names as the Earl of Essex, Lord Charles Howard, the Duke of Buckingham and Admiral Robert Blake. The British attacked again in 1702 (“The Battle of Cádiz”) but were once more repelled after a long and costly siege.
The port of Cádiz became Spain’s main trade port in the eighteenth century and the city experienced a golden age of trading with the Americas. It became one of Spain’s greatest and most cosmopolitan cities and home to trading communities from many countries, among whom the richest was the Irish community. Many of today’s historic buildings in the Old City date from this era. By the end of the century, however, the city suffered another series of attacks, again largely from the British. Nelson, returning from his defeat at Santa Cruz, bombarded the city in 1800 and during Napoleon’s conquest of Europe, Cádiz was one of the few cities in Spain that was able to resist the French invasion.
Photo by saltyseadog 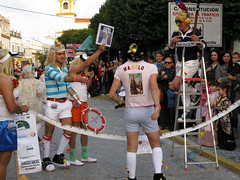 The Carnival of Cádiz (“El Carnaval de Cádiz”) is one of the biggest and best known carnivals in the world. Its presence is felt all year round, with regular carnival-related rehearsals, demonstrations and contests.

It is famous for its humour and this is perfectly illustrated by the “Chirigotas”, local satirical groups who perform comical musical pieces that are usually sharp political criticisms. Typically, a “Chirigota” is composed of seven to twelve performers who sing, act and improvise accompanied by guitars, kazoos, a bass drum, and a variety of other weird and wonderful instruments. There are many other types of high quality performers on show at the carnival in addition to the “Chirigotas”, such as “Comparsas” (groups who sing in close harmony much like a barbershop quartet or the “Mariachis” of Mexico), “Cuartetos” (three or four performers alternating dramatic parodies and humorous songs) and “Romanceros” (storytellers who recite tales in verse). These diverse spectacles turn the city into a colourful and popular open-air theatre for two long weeks in February.

The great climactic event of the Cádiz carnival is the “Gran Teatro Falla”, a contest which sees all of the artists compete for prizes and, of course, local glory. This contest is sponsored by the official association of carnival groups (“Concurso Oficial de Agrupaciones Carnavalescas”) and is one of the highlights of the Cádiz calendar.
Photo by Basilievich
Cádiz is a great place to visit if you love fine fresh food. It has immediate access to the best ingredients, fruit, vegetables, meat, shellfish and fish. Cádiz is perfectly located between sea, mountains and farmlands. The countryside, coastline and rivers provide everything any food lover could desire. Numerous influences are apparent in Cádiz cuisine and give clear indications of Cádiz´s fascinating past. These influences include Phoenician, Roman and Arab.
Classic fried fish is something that should definitely be tried when in Andalusia. Some of the most popular fish in Cádiz are dogfish, tuna, angler fish, snapper, sea-bass and sardines. There is also a huge variety of seafood and this is used in such dishes as seafood stew, fish soup with bitter oranges, fish “a la teja” (cooked on a roof tile), “Urta a la roteña” (fish stew made with tomatoes, onions and green pepper), marinated dogfish, shrimp omelette and anemones.
The world famous Jerez wines are produced nearby. The climate in this zone is warm in spring and autumn and dry in winter and alongside the close proximity to the sea it makes for an optimal maturing process and the perfect development of the vines. Jerez wines include “Finos”, “Manzanillas”, “Amontillados”, “Olorosos”, “Palo Cortado”, and “Pedro Ximénez”. The Brandy of Jerez is internationally renowned and owes its success to its traditional and special techniques of production and ageing. From the pressing of the grapes to its moment of sale, Brandy of Jerez shows its close links with the region. It is made from the distillation of “Airen” and “Palomino” wines, and is aged in casks which previously held some type of Jerez wine. 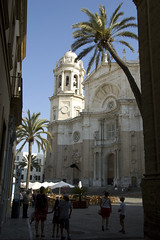 The old town of Cádiz is an intense maze of narrow streets connecting to beautiful squares. Most of Cádiz’s landmark buildings are found in its squares. These include “Plaza de Mina”, “Plaza San Antonio”, “Plaza de Candelaria”, “Plaza de San Juan de Dios” and “Plaza de España”. Possibly the most impressive square is “Plaza de Mina”. This was first developed in 1838 on a piece of land that was previously occupied by the orchard of the convent of San Francisco. It was redeveloped a second time in 1897 and has remained virtually unchanged since then. It is named after General Francisco Espoz y Mina, a hero of the war of independence. The Museum of Cádiz is situated at number five “Plaza de Mina” and contains many interesting objects from Cádiz’s 3000 year history as well as works by such artists as Peter Paul Rubens.
The Cádiz cathedral is found in “Plaza de la Catedral” on the site of an older cathedral that burned down in 1596. Reconstruction on the new cathedral started in 1776, supervised by the same architect who designed the Granada Cathedral, Vicente Acero. This largely baroque-style cathedral was built over a period of 116 years and in this time major alterations were made to its original design. The original Baroque style later took on Rococo elements and was finally completed in a Neoclassical style.
Cádiz’s Theatre was built between 1884 and 1905 on the remains of the previous “Gran Teatro” that was destroyed by a fire in August, 1881. Architect Adolfo Morales de los Rios designed the new theatre. It was renovated in the 1920s and renamed the “Gran Teatro Falla” in honour of composer Manuel de Falla who is buried in the cathedral crypt. After a period of disrepair in the 1980s, the theatre has since undergone further extensive renovation.
Photo by ArminFlikr