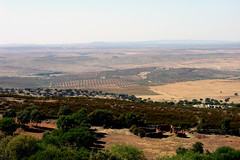 Badajoz is the capital of the province of Badajoz in the autonomous community of Extremadura, situated close to the Portuguese border on the left bank of the river Guadiana. Badajoz is crowned by the ruins of a Moorish castle and a strong wall and bastions, with a broad moat and outworks, and forts on the surrounding heights, give the city an appearance of great strength. The river, which flows between the castle-hill and the powerfully armed fort of San Cristobal, is crossed by a magnificent granite bridge, originally built in 1460, repaired in 1597 and rebuilt in 1833.
The whole aspect of Badajoz recalls its stormy history; even the cathedral, built in 1238, resembles a fortress, with massive walls. It is not mentioned by any Roman historian, and first rose to importance under Moorish rule. It was founded by the Galician Muslim Ibn Marwan in around 875 and after 1022 it became the capital of a small Moorish kingdom called “Taifa of Badajoz”. Though temporarily it was held by the Portuguese in 1168, it retained its independence until 1229 when it was captured by Alfonso IX of Leon. It was known as “Batlabus” and “Batalyos” during Moorish rule.
As a frontier fortress it underwent many sieges. It was beleaguered by the Portuguese in 1660, and in 1705 by the Allies in the War of the Spanish Succession. During the Peninsular War Badajoz was unsuccessfully attacked by the French in 1808 and 1809, but on March 10, 1811, the Spanish commander, José Imaz, was bribed into surrendering to a French force under Marshal Soult. A British army, commanded by Marshal Beresford, endeavoured to retake it, and on May 16, 1811 defeated a relieving force at Albuera, but the siege was abandoned in June. During the Spanish Civil War, Badajoz was taken by the Nationalists in the Battle of Badajoz. Badajoz is the province’s financial and commercial centre and owing to its position the city enjoys a considerable transit trade with Portugal. Industries include the manufacture of linen, woollen and leather goods and pottery.
Photo by PhillipC
In 1812, the future Duke of Wellington, Arthur Wellesley, stormed Badajoz and its French garrison of about 5,000 men. Siege operations commenced on March 16, and by early April there were three breaches in the walls. These were assaulted by two British divisions on April 6, 1812. In the Siege of Badajoz, a detachment of the 45th Regiment of Foot succeeded in getting into the castle first and the red coatee of Lt. James MacPherson of the 45th was hoisted in place of the French flag to indicate the fall of the castle. This feat is commemorated on the 6th April each year when red jackets are flown on Regimental flag staffs and at Nottingham Castle.
With the town taken, military discipline largely disappeared, and the town was subjected to two days of pillage, murder, rape and drunkenness by the British survivors. The only way to restore order was to erect the gallows and flog many soldiers. Wellington had succeeded in taking Badajoz. He wrote to Lord Liverpool: “The capture of Badajos affords as strong an instance of the gallantry of our troops as has ever been displayed, but I anxiously hope that I shall never again be the instrument of putting them to such a test as that to which they were put last night”. The subsequent storming of San Sebastián in 1813 was, however, much like that of Badajoz.
Field Marshal Arthur Wellesley, the first Duke of Wellington (1769 – 1852), was an Anglo-Irish soldier and statesman and one of the leading military and political figures of the nineteenth century. Born in Ireland, he was commissioned an ensign in the British Army in 1787. He rose to prominence as a general during the Peninsular campaign of the Napoleonic Wars, and was promoted to the rank of field marshal after leading the allied forces to victory against the French at the Battle of Vitoria in 1813. Following Napoleon’s exile in 1814, he served as the ambassador to France and was granted a Dukedom. During the Hundred Days in 1815, he commanded the allied army which defeated Napoleon at the Battle of Waterloo. 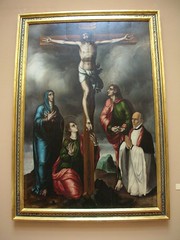 One of the most interesting places to visit when in Badajoz is the “Alcazaba”. This is one of the best conserved walled Arab castles in the whole of Spain with various original towers still intact. The word “Alcazaba” derives from the Arabic word “Al-Casbah” meaning a walled-fortification in a city. Alcazabas can be found in Almería, Antequera, Badajoz, Granada, Guadix, Málaga and Mérida.
Badajoz’s historical old quarter is the perfect place to stroll around and admire the old plazas and churches. Plaza de San José, Plaza de España and La Plaza Alta are three very nice squares to visit. Look out for “Puerta de Palmas”, the two towers flanking the old entrance to the city dating from the 16th century. There is also “Puente de Las Palmas”, a large bridge built in the 16th century that crosses the Guadiana River in 32 arches. Fine museums in Badajoz include MEIZC, Extremadura’s Iberoamerican Museum of Contemporary Art, The Archaeological Museum, Palacio de los Duques de la Roca, in the interior of the Alcazaba on the site of the old Mosque and Museo Provincial de Bellas Artes.
Catedral de San Juan is Badajoz’s very impressive cathedral, built between the 13th and 16th centuries. It is predominantly Gothic and Romanic, with three aisles and twelve inner chapels. Badajoz is the birthplace of the painter Luis de Morales (1510-1586) and five pictures by Morales are preserved in the cathedral. Most of his work was of religious subjects, including many representations of the Madonna and Child and the Passion. Influenced, especially in his early work, by Raphael Sanzio and the Lombard school of Leonardo, he was called by his contemporaries “The Divine Morales”, because of his skill and the shocking realism of his paintings, and because of the spirituality transmitted by all his work. Badajoz churches include Iglesia de Santa Domingo, Iglesia San Andrés and Iglesia San Agustín de la Concepción.
Photo by puroticorico 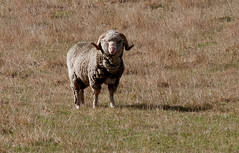 Badajoz meats are of very high quality, as are local wines. More and more bodegas in Extremadura are producing very good wines and the area is signalled by wine experts as one of Spain’s most promising wine producing regions. Top breeds such as Iberian pigs, Merino sheep and Retinto cattle graze in the Extremaduran pastureland, ensuring a permanent stock of prime meats. The local cuisine is authentic, not too sophisticated and based on the natural excellence of the ingredients. Wild asparagus, golden thistle, truffles, wild mushrooms and game meats are popular ingredients in an imaginative and original cuisine that will please the most demanding gourmet. Partridge is one of the best game meats and is the most plentiful. It is cooked in a variety of ways, such as partridge hotpot, marinated partridge and many different stews. Other game meats include hare, rabbit, pigeon, turtle dove, venison and wild boar.
The slaughtering of Iberian pigs and the thorough use of the animal is very important in this region. A ritual family feast takes place when the time comes to sacrifice a pig. Some parts are roasted and eaten right as they come and the rest of the meat and innards gets transformed into different types of sausage, such as “Chorizo” (Spanish sausages cured with paprika) and “Morcilla” (black pudding). The sausages are used to give their flavour to all kinds of stews, casseroles and a variety of traditional dishes. Meat stew, testicles, roasted liver and lungs, roast lamb, baby goat and suckling pig are speciality Badajoz dishes.
The confectionery from Badajoz is also wonderful and very varied. Some sweets are seasonal, such as fritters and “Borrachuelos” (made with honey, sweet wine, aniseed and bitter oranges), while others can be found all year round. These include “Calderillas”, “Técula-mécula”, “Perrunillas” (pastries made with liqueur, lard, cinnamon and eggs), and almond puff pastries. The cheeses from this province are delicious and varied. Some good cheeses to try are a goat’s cheese called “Quesaillas” and a soft, creamy sheep’s cheese called “Torta de La Serena”. The best wines in the province of Badajoz fall under the Designation of Origin Ribera del Guadiana, which comprises white, rosé and red wines. The wines that do not fall under the Designation of Origin are also very good and have the label of Tierra de Extremadura.
Photo by PhillipC
Mérida is located just outside Badajoz and was the largest Roman city in Iberia founded in 25 BC. Mérida preserves more important ancient Roman monuments than any other city in Spain and because of this the “Archaeological Ensemble of Mérida” is a World Heritage site. As one of the strongholds of the Roman Empire as it made its way through Europe, the town of Merida has many tales to tell in its buildings and architecture. Indeed, with it being so close to the Portuguese border, its history has found the town being in the control of not only Rome, but Portugal as well.
One of the landmarks of the town is the Roman amphitheatre, which dates back to before the birth of Christ, and was built by the famous architect, Agrippa. Such is the condition of it today that there are still plays held there every summer during the popular Festival of Merida which takes place annually in July and August attracting many visitors. Music and dance events are staged, not only in the amphitheatre, but in the Roman theatre itself. This dates back to 15BC and retains many of its original stone columns.
On the outskirts of Mérida is the Circo Romano which originally had a capacity for 30,000 people. It is the only remaining hippodrome in Spain dating back to Roman times. The Temple of Diana in the centre of town is another interesting place to visit. The temple ruins have been incorporated into a house built in the 17th century, with four of the temple’s columns used as a kind of fence. Other notable buildings are the Alcazaba which was constructed around the ruins of an original Roman fort, the National Museum of Roman Art which houses some of the best-kept statues and art of ancient Rome, the Iglesia de Santa Eulalia and the Roman Bridge which serves as a footbridge to cross the Guadiana River.
The Spanish Blog