Almería is Andalucia’s most eastern capital. It is located at the bottom of a mountain range that is crowned by the magnificent “Alcazaba” – an Arab fortress built by Abd-erRahman, the Caliph of Cordoba and the second largest Muslim fortress in Andalusia after the “Alhambra”.

Almería was founded by Abd ar-Rahman III of Cordoba in 955 as a principal harbour in his extensive domain to strengthen his Mediterranean defenses. The name “Almería” comes from the Arabic word “Al-Mariyat” (“The Mirror” or “The Mirror of the Sea”). Almería eventually fell under Christian control late in the 15th century when it surrendered to the Catholic Monarchs, Ferdinand and Isabella on December 26, 1489.

The 16th century was catastrophic for Almería in many ways. The city suffered at least four earthquakes. One in 1522 was especially violent and devastated the city. Also the remaining Muslims were expelled from Almería after the War of “Las Alpujarras” in 1568 and were scattered across Spain. Landings and attacks by Berber pirates were frequent in the 16th century and continued until the early 18th century. In this time, large iron mines were discovered and French and British companies came to settle in the area, bringing renewed prosperity to Almería. More recently, Almería has seen spectacular economic growth due to tourism and intensive agriculture. Plants are grown all year round in enormous ‘Invernaderos’ – plastic-covered greenhouses especially designed for intensive vegetable production. 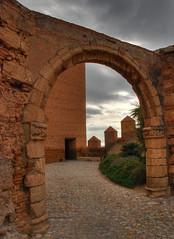 One of the first places to see in Almería must be the “Alcazaba”, an imposing fortress that recalls Almería’s pomp when it was the major port of the Caliphate of Córdoba. The Caliphate of Córdoba (a “Caliphate” is the Islamic form of government representing the political unity and leadership of the Muslim world) ruled the Iberian Peninsula and North Africa from the city of Córdoba between 929 and 1031. Abd-ar-Rahman III, a member of the Umayyad Dynasty, proclaimed himself Caliph of Córdoba in January of 929 and his time as ruler is known as the heyday of Muslim presence in the Iberian Peninsula. In 1031,
Incredible success was seen in trade and culture and many of the masterpieces of Islamic Iberia were constructed in this period, including the famous Great Mosque of Córdoba. Most of Almería’s wealth was accumulated from trade in the textile industry, with silk woven from the silkworms of the “Alpujarras”. After years of infighting, the Caliphate fractured into a number of independent Taifa kingdoms and the prominence of Almería gradually diminished.
The word “Alcazaba” derives from the Arabic word “Al-Casbah” and is the name given to various Moorish walled fortifications in Spain. “Alcazabas” remain not only in Almería, but also in Antequera, Badajoz (the largest), Granada, Guadix, Málaga and Mérida (the oldest). The “Alcazaba” in Granada is the oldest portion of the “Alhambra”. In times of war, the Almería “Alcazaba” could hold an army of more than 20,000 men. Connected to it is the “Muralla de Jairan” that was built in the 11th century by Jairan, the first ruler of the Almeria Taifa. The wall descends the valley on the north side of the “Alcazaba” and climbs the “Cerro de San Cristobal” on the other side.
Photo by aeruginosa

Almeria’s cathedral can be found in the heart of the old part of the city. The original cathedral was destroyed in the great earthquake of 1522 and work on the existing building began in 1524. It is a key feature of Almería and well worth visiting.
The architecture is a combination of Gothic and Renaissance and its fortress like appearance was due to necessity under the pressure of reoccurring raids Almería from pirates of Northern Africa and Turkey. The whole southern Mediterranean was terrorised during the 15th and 16th Centuries by the raids of Barbarossa and other Turkish and North African pirates. The defences can be clearly seen in the Cathedral’s corner towers where they once held canons.
In the centre of the cathedral is the great altar with a wealth of priceless art work including a tabernacle by Ventura Rodriguez dating back to the 18th century, paintings by Alonso Cañón and the statue of St. Indaletius, the patron saint of Almeria, sculpted by Saizillo. The spacious interior has a wonderful Gothic ribbed ceiling and makes use of local marble in some of its baroque and neo-classical trimmings. The chapel behind the main altar contains the tomb of Bishop Villalan who was the founder of the cathedral and the north facade is an elaborate mid-16th century design by Juan de Orea.
Photo by Jacobo Canady 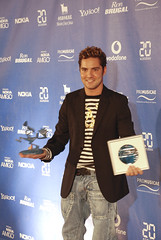 One of Almería’s most famous sons is singer David Bisbal who was born there on June 5th, 1979. This charismatic and energetic artist is extremely popular in Spain and Latin America, but also has a large following in The United States, Japan and Australia.
Bisbal first made a name for himself in 2001/2002 when he was a contestant in the Spanish TV show “Operación Triunfo”. This is the Spanish equivalent of Pop Idol and Bisbal was part of the first series of the now hugely popular show. He actually only came second behind winner Rosa López, but has gone on to become clearly the most successful of any “Operación Triunfo” contestant. His talent was spotted by renowned record producer Kike Santander (who later became academy Director of “Operación Triunfo”) who offered him a recording deal. Bisbal’s debut album “Corazón Latino” was recorded in Miami and released in 2002. It is a mix of rumba, flamenco and pop that went straight to the top of the charts. His second album “Bulería” (2004) contains the singles “Bulería”, “Oye el boom”, “Camina y ven” and “Me Derrumbo.” “Bulería” is homage to Bisbal’s homeland, and includes a flamenco flavour alongside his usual Latin style. Both discs were big hits and you are guaranteed to hear the singles in any street party for many years to come.
In summer 2004 he embarked on a successful tour and released the DVD “Todo Por ustedes” which contains a live concert from the tour. He has since gone on to push more for the European and American markets singing some songs in English. He has collaborated with Joana Zimmer on the ballad “Let’s make history” and in 2008 recorded a duet with Rihanna called “Como Odio Amarte”.
Photo by El Informador Digital
Almería is one of the driest regions in Europe as well as one of the warmest with an average annual temperature of 19 degrees Celsius and 330 sunny days on average per year. During the winter the weather is still also fairly dry and daily temperatures are usually between 15-20°C. During the summer temperatures rarely drop below 30°C. Nightly temperatures during the summer are usually between 22-26°C.
One of its most popular draws is the “Cabo de Gata-Níjar” Natural Park. This park is of volcanic origin and is one of the largest and most ecologically significant marine-terrestrial spaces in Europe. It covers an area of 380 square kilometres with a truly wonderful coastline. It runs through not only Almería but also the municipal areas of Níjar and Carboneras. Its villages were previously dedicated to fishing, but have more recently become dedicated tourism spots for nature lovers.
Due to its dry climate and arid landscape, numerous spaghetti westerns have been filmed in Almería. Many of the classic Sergio Leone’s films were filmed there including “A fistful of dollars”, “For a few dollars more” and “The good the bad and the ugly”. Some of the sets are still there to see in the “Tabernas” desert. Almería was also used by David Lean in “Lawrence of Arabia” (1962).