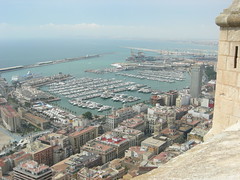 Alicante, or “Alacant” in Valencian, is a city in south eastern Spain and the capital of the province of Alicante and of the Comarca of the Alacantí in the Community of Valencia. It is a historic Mediterranean port founded in 324 BC and the second-largest Valencian city.
Alicante Airport is much busier than its Valencian counterpart and is among the busiest airports in Spain along with Madrid, Barcelona, Palma de Mallorca and Málaga. It is connected with Madrid and Barcelona by frequent Iberia and Spanair flights, and with many Western European cities through carriers such as Easyjet, Ryanair, Air Berlin, Monarch Airlines, Globespan, and Jet2.com. Alicante railway station is used by commuter railways linking Alicante with suburban and Murcia. Long-range RENFE trains run frequently to Madrid and Barcelona. Alicante Tram connects the city with outlying settlements along Costa Blanca, such as Benidorm and the city also has regular ferry services to the Balearic Islands and Algeria.
One of the main reasons why Alicante is such a popular tourist destination is its wonderful climate. Alicante enjoys a typical Mediterranean climate with mild temperatures throughout the year and little rain. The average temperature is between 6.2°-16.8º in January and between 20.4º-30.6° in August, with an average annual temperature of 17.8°. September and October are the rainiest months due to torrential rains caused by “La Gota Fria” (“The Cold Drop” – a meteorological phenomenon that occurs when a front of very cold polar air, a jet stream, advances slowly over Western Europe at high altitude and is suddenly cut off by high pressure). Rainfall can reach over 200 mm in 24 hours causing severe flooding. Because of this irregularity, on average of only 37 rainy days are observed per year and the annual number of sunshine hours reaches 2,864. The record rainfall of 270.2 mm in 24 hours was observed on September 30, 1997.
Photo by kriskaer 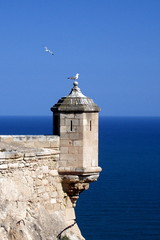 The area around Alicante has been inhabited for over 7000 years, with the first tribes of hunter gatherers moving down from Central Europe between 5000 and 3000 BC. Some of the earliest settlements were made on the slopes of Mount Benacantil. By 1000 BC Greek and Phoenician traders had begun to visit the eastern coast of Spain, establishing small trading ports and introducing the native Iberian tribes to the alphabet, iron and the pottery wheel. By the sixth century BC, the rival armies of Carthage and Rome began to invade and fight for control of the Iberian Peninsula. The Carthaginian general Hamilcar Barca established the fortified settlement of “Akra Leuka” (meaning “White Mountain” or “White Point”) where Alicante stands today.
The Romans would eventually rule “Hispania Tarraconensis” for over 700 years. “Hispania Tarraconensis” was one of three Roman provinces in Hispania and encompassed much of the Mediterranean coast of Spain along with the central plateau and the north coast. Southern Spain, the region now called Andalucia, was the province of “Hispania Baetica” and on the West Atlantic lay the province of “Lusitania”. By the 5th century AD, Rome was in decline and the Roman predecessor town of Alicante, known then as “Lucentum”, was more or less under the control of the Visigothic warlord Theudimer. However neither the Romans nor the Goths put up much resistance to the Arab conquest in the 8th century. The Moors gave the city its modern name – “Alicante” is Arabic for “City of lights”. The Moors ruled southern and eastern Spain until the 11th century Christian “Reconquista”. Alicante was finally taken in 1246 by the Castilian King Alfonso X, but passed soon and definitely to the Kingdom of Valencia in 1298 with King James II of Aragon.
Alicante became a major Mediterranean trading station exporting rice, wine, olive oil, oranges and wool. However, between 1609 and 1614 King Felipe III decided to expel thousands of “Moriscos” (“Moor-likes” – those of Muslim ancestry) who had remained in Valencia after the Reconquista, due to their allegiance with Barbary pirates who continually attacked coastal cities and caused great harm to trade. This act cost the region dearly; with so many skilled artisans and agricultural labourers gone, the feudal nobility found itself sliding into bankruptcy. Things got worse in the early 18th century; after the “War of Spanish Succession”, Alicante went into a long, slow decline, surviving through the 18th and 19th centuries by making shoes and agricultural products such as oranges and almonds, and its fisheries.
Photo by andrewcparnell 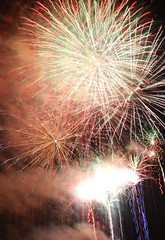 One of the most notable features of Alicante is the ancient Castle of Santa Bárbara, which sits high above the city port of Alicante on Mount Benacantil at 166 m. Bronze Age, Iberian, and Roman artifacts have been found on the slopes of the mountain, but the origins of the castle date to the ninth century at the time of Muslim control of the Iberian Peninsula. From the 18th century the military role of the castle declined and it was used sometimes as a prison. The castle remained abandoned until 1963, when it was opened to the public. Elevators were installed inside the mountain. It was the subject of bitter controversy in 2006-2007 when residents battled to keep it from being changed into an industrial estate.
There are a number of notable museums in Alicante. The Archaeological Museum of Alicante presents artifacts from up to 100,000 years ago and was awarded the prestigious European Museum of the Year award in 2004. The Gravina Museum of Fine Arts exhibits paintings and sculptures of Alicante from 16th century to 19th century and there is also The Asegurada Museum of Contemporary Art. Every summer in Alicante, a two-month-long programme of music, theatre and dance is staged in the Paseo del Puerto.
Alicante’s most important festival of the year is Hogueras de San Juan (The Bonfires of Saint John), which takes place during the summer solstice. This is followed a week later by seven nights of fireworks and pyrotechnic contests between local companies on the beach Playa del Postiguet. Another well-known festival is Moros y Cristianos in Altozano or San Blas. The city boasts a vibrant year-round nightlife, helped by the steady flow of tourists, fun-loving residents and a large student population from the University of Alicante. The nightlife social scene tends to shift to nearby Playa de San Juan during the summer months.
Photo by palm z

Alicante gastronomy is largely based upon the Mediterranean Sea because of its close proximity however the region also has fine fertile land that produces wonderful fruits and vegetables. Alicante is the perfect place to sample the typical Mediterranean diet in the sunshine that is guaranteed almost all year round. Olive oil, fish and tomatoes are an important part of the local diet. Rice, as well, is prevalent in many of Alicante’s dishes and this can be linked back to Alicante’s cultural Muslim roots.
One of the most famous popular local dishes is, of course, paella. Customarily, it’s composed of rice with chicken or rabbit, or both. Garlic accompanies the oil in flavouring the sauce. Some vegetables and possibly shellfish are added to garnish the dish. Of course, these ingredients can vary according to individual tastes. Along with paella there are hundreds of other rice dishes in this region. A great way to sample some other flavours is to eat at an “Arroceria” (“arroz” – rice), which is a restaurant explicitly serving rice dishes. Tapas also are always a great way to taste a medley of local or national delicacies and Alicante is overflowing with good tapas bars and restaurants.
It is also worth trying some of the fresh fruits that are grown locally in Alicante, such as the cherries, oranges, or grapes. In fact, the famous Spanish tradition of eating 12 grapes along with the chimes of the clock in the countdown of New Year’s Eve was born in Alicante, in 1909, because there was a surplus of grapes that year. If you are in Alicante at Christmas you should definitely try “Turrón” which is a sweet traditionally made of almonds and honey in the town of Jijona in the province of Alicante. These days “Turrón” comes in all flavours and is bought in vast quantities all over Spain at Christmas time.
Photo by Alex Castellá
The Spanish poet Miguel Hernández was born in Orihuela, Alicante, in 1910 to a poor family and given little formal education. He published his first book of poetry at 23 and gained considerable fame before his death in 1942.
During the Spanish Civil War he campaigned in favour of the Republic, writing poetry and addressing the troops. Unlike others, after the Republican surrender he could not escape Spain. The poet was arrested multiple times for his anti-fascist sympathies and was eventually sentenced to death. His death sentence, however, was commuted for 30 years and the poet lived in multiple jails under extraordinarily harsh conditions. He eventually succumbed to tuberculosis in 1942. Just before he died, he scrawled his last verse on the wall of the hospital: “Goodbye, brothers, comrades, friends: let me take my leave of the sun and the fields”. While in jail, the poet produced an extraordinary amount of poetry, much of it in the form of simple songs, which he collected in his papers and sent to his wife and others.
These poems are now known as his “Cancionero y romancero de ausencia” (Songs and ballads of absence). In these works, the poet writes not only of the tragedy of the Spanish Civil War and his own incarceration, but also of the death of an infant son and the struggle of his wife and another son to survive in poverty. The intensity and simplicity of the poems, combined with the extraordinary situation of the poet, give them remarkable power. Perhaps the best known work of the poet is a poem called “Nanas de cebolla” (“Onion Lullaby”), a poem in which Hernández replies to a letter from his wife in which she told him that she was surviving on bread and onions. In this as in other poems, the poet turns his wife’s body into a mythic symbol of desperation and hope, of regenerative power desperately needed in a broken Spain.