Zaragoza is located in north east Spain and is the capital city of the Zaragoza province. It has one of the largest populations in Spain and famously hosted the 2008 World Fair on water and sustainable development – Expo Zaragoza. Zaragoza offers an amazing variety of different landscapes from desert to dense forest, meadows and mountains and is situated on the beautiful river Ebro and its tributaries, the Huerva and Gállego.
Zaragoza was originally called “Salduba”, “Saldyva” or “Salduie”. It was later invaded by the Romans and then the Arabs in 714. The Arabs renamed it “Saraqusta” and it grew to become the biggest Arab controlled city of Northern Spain.
Zaragoza is surrounded by mountains and has a Mediterranean continental desert climate. The average rainfall is relatively low and there is an abundance of fine sunny days. Most of the heavy rainfall comes in spring. The temperatures in summer can be sweltering and the temperatures in winter very low, largely due to the cold and dry north westerly winds and the amount of fog hanging in the valleys. 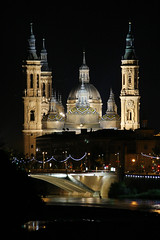 Zaragoza was severely affected by the three year Spanish Civil War between 1936 and 1939. It was bombed and its towns were left in poverty and division.
The Spanish Civil War was a fierce conflict between Nationalists and Republican Loyalists. It was won by the Nationalists led by the fascist General Franco, who then went on to collaborate with Hitler and Mussolini. Zaragoza was essentially a Republican area, but put up little resistance to the Francoist troops. Thousands of Republican enemies were brutally killed after Franco secured victory.
World War II followed soon after the end of the Spanish Civil War and despite Franco’s association with Hitler and Mussolini Spain remained officially neutral. As a result Spain’s physical environment came out largely unscathed.
The second half of the twentieth century saw considerable growth in Zaragoza’s economy with the opening of numerous factories and a booming population. A General Motors Opel factory was opened in 1982 and became one of the pillars of the local economy.
The typical food and drink of Zaragoza can be described as simple, nutritious and full of character. Two of the most obvious local dishes are the “Chilindrón” (chicken stew) “Huevos al Salmorrejo” (egg stew with ham, sausages, garlic and olive oil) and “ Bacalao al Ajoarriero” (cod with oil, garlic and peppers).
The Zaragoza farms provide the delicious vegetables that give these dishes their intense flavour. The region is a fine producer of peppers, tomatoes, thistles, courgettes, onions, green beans and borage. Zaragoza food is hearty and flavoursome. Other popular ingredients include potatoes, pulses, game meats, lamb, pork, beef and wonderful rustic breads.
There is also an abundance of fantastic fruits to be found in the Ebro river valley, including plums, pears, apples, cherries, apricots and peaches. These fruits are used in many of the local desserts. One of the favourites is crystallised fruits covered with chocolate. There is an obvious Moorish influence in many of the desserts, such as “Guirlache” (a toasted almond and caramel paste) and “Crespillo” (fritters made with borage leaves).
Although Zaragoza does not have a coastline it is also fond of fish. Fresh fish is brought in daily and there is a good range of local fresh-water fish, such as trout. The Zaragoza province is home to three fine wine regions: Cariñena, Calatayud and Campo de Borja, producing excellent modern red and white wines.
Photo by kurtxio

Every Spanish city loves a fiesta and no city loves celebrating more than Zaragoza.
The most important celebrations are the “Fiestas del Pilar” in October, in honour of the town’s patroness “Virgen del Pilar”. Legend says that the Virgin Mary appeared to Saint James in the first century standing on a pillar and this is commemorated by Zaragoza’s famous basilica “Nuestra Señora del Pilar” (Our Lady of the Pillar).
People travel from far and wide to join in and the streets are jam-packed with noisy partying and merrymaking for nine days. Typical activities at this time are the “Vaquillas” (bullfights with young bulls), music, sports, religious processions, Aragón folklore, exhibitions and dancing. “Ofrenda de Flores” is a ritual offering of a cloak made of flowers to the Virgin on the 12th of October. Events draw to a close on the ninth day with an impressive firework display over the river Ebro.
October 12th also happens to be “El Día de la Hispanidad” (Columbus Day). On this day in 1492 Columbus’ ship first sighted the Americas and made that historic discovery. It is a day celebrated throughout the Spanish speaking world.
Photo by A. www.viajar24h.com 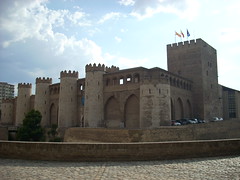 One of the most eye catching monuments of Zaragoza is the Baroque style “Catedral-Basílica de Nuestra Señora del Pilar” (Cathedral-Basilica of Our Lady of the Pillar) on the banks of the river Ebro. It is a Roman Catholic church dedicated to The Virgin Mary, under the title “Our lady of the Pillar” who is said to have appeared to St James, the apostle who brought Christianity to Spain. Most of the building work was done between 1681 and 1872.
Catedral-Basílica de Nuestra Señora del Pilar is one of two basilicas in Zaragoza. The other is nearby La Seo Cathedral, also known as Cathedral of San Salvador. This is another extremely impressive church that was built over the city’s original main mosque.
Just outside the old town area is the “Aljafería”. This is a beautiful Moorish palace and one of the most important Moorish buildings in northern Spain. It is currently used by the Aragonese parliament and has also been used as the setting for the Verdi opera “Il Trovatore”.
Zaragoza has some very interesting museums such as the Museum of Fine Arts which houses paintings by many early Aragonese artists alongside paintings by El Greco, Ribera and Goya. The Camon Aznar Museum is also worth visiting with a huge range of paintings by such artists as Rembrandt, Velazquez, Goya, Renoir and Manet.
Photo by Cruccone