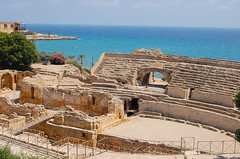 Tarragona is located in the east of Spain, in Catalonia, by the Mediterranean Sea. It is the capital of the Spanish province of the same name. It was founded in the 5th Century BC, but really started to flourish under the Romans. Romans arrived in 218 BC and Tarragona soon became a very cultured city. The Roman remains are still in evidence today to such an extent it was granted world heritage status in 2000.
There are essentially three parts to Tarragona. The old part is situated on the highest land and is extremely beautiful, very historic and almost traffic free. Here the streets are narrow and winding and the 12th Century Cathedral is a must-see. The new town by contrast is bustling with energy and has wide, tree lined streets such as Rambla Nova ending with El Balco del Mediterrani overlooking the sea and Roman amphitheatre. The third and final part of Tarragona is the marina and port area which can be accessed from El Balco del Mediterrani by steps. This is not the most attractive part of Tarragona, but is where you should head if you’re looking for late clubs and bars or great seafood restaurants.
A number of fantastic beaches line the Mediterranean coast near the city. Tarragona is located near the holiday resort of Salou and the Universal Studios theme park Port Aventura, one of the largest in Europe.
Photo by tiagoluiz
The Passeig arqueològic is a walkway around the walls of the old medieval part of Tarragona known as the Parta Alta. Roman history oozes from the walls and gateways lead the way to Roman columns and great statues, such as that of Roman Emperor Augustus. This is the highest part of Tarragona and there are amazing views to be had of the wider city beyond. The charm of Tarragona is found wandering through the narrow winding streets, and squares of the medieval town.

The old town highlight is defintely the Cathedral located at the top of the Calle Major and reached via steps. Building of the Cathedral started in 1184 on the remains of an earlier Christian church and Arab mosque. It is an excellent example of the transition between Romanesque and Gothic styles.

Tarragona is a wonderful place to brush up on your Roman history. The Roman name for the city was “Tarraco” and evidence of Tarraco is clearly visible in the old amphitheatre by the sea, the ‘circ roma’ where chariot races would have been held, the forum and necropolis. Puente del Diablo (Devil’s Bridge) can also found just outside Tarragona, an impressive aqueduct. A huge collection of Roman remains, artifacts, mosaics, and jewellery, can be viewed at The Museu Nacional Arqueològic and in May there is the “Tarraco Viva” and “Tarraco a Taula” festival celebrating the city’s past with cultural events, gladiator fights, and Roman cuisine.

Rambla Nova is a stark contrast to the old streets – a wide tree-lined boulevard that leads to the seafront with numerous shops, coffee shops, bars and restaurants. Rambla Nova ends at the the Balcon del Mediterraneo – an open area and main meeting point in the city. This is the ideal place to relax and take in some beautiful views from the amphitheatre to the port, and out across the Mediterranean.

The port area of Tarragona is the place to find great fish and seafood restaurants. Head to Serallo, the fisherman’s quarter, or to Platja Llarga. If you are looking for a good quality and well priced “Menu del dia” (menu of the day) your best bet is probably the Placa del font and its nearby streets. Here you will also find excellent places for a drink and tapas. Rambla Nova is full of cafes and bars serving the finest coffee,cakes and ice-cream. The old town is where you find the more upmarket eateries and the best locations for a special dinner. This is the ideal place to sample the best in modern Catalan food.
For nightlife most of the action occurs in the clubs and bars that open late in the Marina area. A more relaxed, yet still very long, night can also be enjoyed chatting over a few drinks in the bars of Rambla Novo or the old town. During the Santa Tecla festival every other shop in the old town seems to transform into an outside bar and the streets are the place to be.
Spain is a fantastic place to shop with good homegrown chain stores offering quality products at very reasonable prices. If you are keen on checking out the big chain stores such as Zara you will find them all in the Rambla Nova or the out of town shopping centre Parc Central. Quainter independent shops are more abundant in the old town. Interesting areas to see include Placa Corsini with its indoor food market and flea market and the Cathedral steps for the weekly antiques and bric-a-bric market. There are also some interesting galleries to nose about in on the Calle Major.
If sun-worshipping is your thing, Tarragona offers a good selection of clean beaches. The main city beach is Platja del Miracle and you can also find Platja Arrabassada and Platja llarga nearby to the north-east of the city. In summer these beaches have fine beach bars playing live music and are a great place to while away the day over a cold cocktail.
Photo by vittis
The Tarragona carnival in February is one of the most important and colourful carnivals in Spain and an amazing spectacle to behold. It is best known for its float filled parades and street dancing. Thousands of people take part in the festivities, dances and processions that make up the Carnivals of Reus.
The origins of the carnival date back to Roman times, in the Saturnal, Lupercal and Matronal festivities celebrated by the Romans, and history is reenacted through various ancient rituals. The sequence of events starts with the building of a huge barrel and ends with its burning together with the effigies of the carnival King and Queen. There are associations, musicians and percussion bands that prepare all year for the event.
September sees the Festes de Santa Tecla, Tarragona’s biggest festival (Festa Major), an event that has been declared an event of national interest. The festival lasts for ten days straight and is a vibrant blend of the traditional and contemporary. The central events are the procession and castells (human towers), but this is just the tip of the iceberg. There is so much to enjoy from music to food to sporting events. It is an explosion of music and colour that helps prolong the summer just that little bit longer. 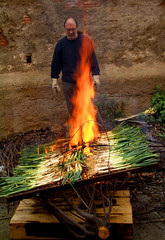 Calçots originated in Tarragona and are synonomous with the region. They are a Catalan speciality and basically giant scallions that have been grown covered in earth so that the edible part remains white and the vulva does not develop. Then they are barbecued whole in their dozens (they are sold in bunches of two dozen) over a slow fire so that they steam in their charred skins. You pull out the soft juicy centre, dip it into a special thick nutty and tangy romesco sauce, tip your head back and devour the whole thing in one. It doesn’t sound a particulary elegant way of eating and it isn’t. Bibs are usually at hand, but really there is no point in bothering as you will certainly end up covered in sauce the first time. Also a litte charred and burned, but its all part of the experience!

The traditional way of eating calçots is at a Calçotada, a popular feast held between the end of winter and March or April. The calçots are cooked on roof tiles over a charcoal vine barbecue alongside various meats such as lamb, pork and embutidos such as chorizo. It is a messy affair and the surrounding area is always deep in discarded calçot skins and sauce, but it is great fun and a truly unique experience that transports you back to the days of the Roman Empire at its most decadent. As with every Spanish festive event, the streets are bursting with conversation, music and joy as great food is washed down with lashings of fine red wine and cava.