Seville is located in south west Spain on the banks of the River Guadalquivir, is the capital of Andalusia and is the artistic, cultural, and financial centre of southern Spain. The people of Seville are known as “Sevillanos/Sevillanas” or “Hispalenses” and Seville is the fourth largest city in Spain close behind Valencia, Barcelona and Madrid.
Seville is over 2,000 years old and is said to have been originally founded by Hercules. It was called “Hispalis” under the Romans and then later renamed “Isbiliya” by the Moors when the city was taken in 712. Previous to this, in the 5th and 6th centuries, it had also seen Vandal and Visigoth conquests. It remained under Muslim control until 1248 when it fell to Fernando III and still retains much of its Moorish history, including large sections of the city wall.
Seville enjoyed a golden age of development following the discovery of America and the wealth accumulated due to the awarding of a monopoly of trade with the Spanish territories in the New World. 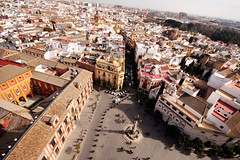 Seville cuisine draws heavily on the influences of the surrounding provinces, including seafood from Cádiz, olive oil from Jaén, and sherry from Jerez de la Frontera. There is a fantastic tapas scene here and thousands of vibrant bars offering a tapas version of pretty much any dish you could imagine. The city is credited with the invention of tapas and Sevillians love flitting from bar to bar trying one dish at a time. Local speciality savoury dishes include fried and grilled seafood, grilled meats, spinach, chickpeas, top quality Jamon (cured ham), lamb’s kidneys in a sherry sauce, snails, and gazpacho.
Typical sweets are “Polvorones” and “Mantecados” (shortcake made with almonds, sugar and lard), “Pestiños” (honey-coated sweet fritter), “Torrijas” (fried slices of bread with honey), “Roscos fritos” (deep-fried sugar-coated ring doughnuts), “Magdalenas” (fairy cakes), “Tortas de aceite” (thin sugar-coated cakes made with olive oil) and “Yemas de San Leandro” made in the Seville convent “Sevillano Convento de San Leandro”. “Polvorones” and “Mantecados” are traditional Christmas products, and only really consumed at this time of year, but all of the others are consumed throughout the year. Seville oranges that colour the city landscape are too bitter to just pick and eat, but are used to make wonderful marmalade.
Photo by clspeace

Seville is famous worldwide for its April festivities. This begins with “Semana Santa” (Easter/Holy Week) and its enormous and extremely beautiful processions that see the streets filled with solemnly respectful locals of all ages. Hooded penitents march the streets to the sound of beating drums and are followed by huge baroque floats on which sit images of the Virgin or Christ. It is a time when the whole community participates in some way to make the processions bigger and better than the previous year.
Shortly after “Semana Santa” the atmosphere becomes much more lively and colourful with the start of “La Feria de Sevilla” or “La Feria de Abril” (Seville Festival or April Festival). The turn-out is just as impressive and now the locals really let their hair down socialising, singing, dancing, eating and drinking. Again everyone gets stuck in to help run the event and make it a success; families and local businesses set up tents and no-one is prepared to let the night finish early.
“La Feria de Sevilla” is a week long celebration of everything Andalusian. Traditionally, women wear elaborate brilliantly coloured flamenco dresses while the men dress in their best suits and often ride majestic horses. This is many people’s stereotypical Spain, with the castanets, flamenco music, sun, and sangria, and it is a joy to behold. For all its important history and fascinating monuments, Seville is most famous for being a joyous party town.
Photo by A. www.viajar24h.com
Seville is full of wonderful buildings and monuments of great historical interest and there is never enough time to explore them all fully. Seville cathedral was built between 1401–1519 after the “Reconquista” on the former site of the city’s mosque and is one of the largest of all medieval and Gothic cathedrals. It is absolutely beautiful inside, with a high quantity of gold that dazzles your eyes.
Some of the original elements of the mosque were retained in the cathedral. The most obvious of these is “La Giralda”, originally a minaret, that was converted into a bell tower. The ramps to and from the tower were built to allow people to ride on horseback to the top. The statue at the top of the tower is known as “El Giraldillo” and represents Faith. You can climb to the top and the views available there across the city really are worth the effort.
Opposite the cathedral is the magnificent “El Real Alcázar de Sevilla”, an old Moorish palace that was built over a period of about 500 years from 1181. Its marvellous gardens are a blend of Moorish, Andalusian, and Christian traditions. This palace is one of the best remaining examples of “Mudéjar” architecture and parts of it are still used by the royal family as the official Seville residence.
Other interesting sights include the 16th century town hall, the University of Seville, the 16th century mansion “Casa de Pilatos”, the church of “Santa Ana” and “Plaza de España”, a square built by the architect Aníbal González for the 1929 “Exposición Ibero-Americana”. 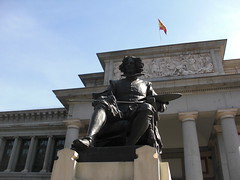 The individualist Baroque painter Diego Velázquez was born in Seville on June 6, 1599. He was the main artist in the court of King Philip IV and the leading artist of Spain’s “Golden Age”, a period of flourishing arts and literature in Spain . He painted numerous portraits of the Spanish royal family. “Las Meninas” (1656) is widely recognised as his masterpiece. Velázquez’s work was a model for the realist and impressionist painters of the early nineteenth century, such as Manet. More recently his work has been recreated in tribute by such famous names as Picasso, Dali and Bacon. There is a prominent statue of Velázquez located in front of Madrid’s Prado Museum, made in 1899 by Segovia sculptor Aniceto Marinas.
2oth Century poet Antonio Machado was born in Seville in 1875 and was one of the most influential literary figures of the Spanish-American War period (1898). Actress and singer Carmen Sevilla was born in Seville in 1930 and in her later career became a very popular TV presenter. Singer Isabel Pantoja was born in Seville in 1956, released numerous distinctively Andalusian sounding albums and gave the Spanish media an endless supply of juicy news stories revolving primarily around her relationships with bullfighter “Paquirri”, Francisco Rivera Pérez, who died in the Córdoba bullring and Marbella Mayor Julián Muñoz who was convicted of corruption and sentenced to jail in 2007.
Sevillian dancers include Farruquito, Sevillian footballers include José Antonio Reyes, Sergio Ramos, Antonio Puerta and Carlos Marchena and Sevillian politicians include Felipe González, President of the Government of Spain from 1982 to 1996, and Alfonso Guerra, vice president from 1982 to 1991.
Photo by tiseb
The Spanish Blog