Santiago de Compostela is a World Heritage City and the capital of Galicia, in the far north west of Spain. The lush green lands of Galicia feel like nowhere else in Spain. It is famed for its fine seafood and wines, Celtic ties and the pilgrimage “El camino de Santiago” (The Way of St James). St James was buried in Santiago de Compostela after his remains were transferred to Galicia from the Holy Land by two disciples in a small boat after he was executed in AD44. The Cathedral of Santiago stands on his burial site and this is the destination for the thousands of pilgrims who walk the ancient pilgrimage every year. Santiago de Compostella is considered to be the third most important city in the Christian world after Rome and Jerusalem.
Santiago de Compostela was destroyed by the Muslims at the end of the 10th century, but was completely rebuilt in the following century. The old part of the city is truly beautiful and has a vast array of wonderful Romanesque, Gothic and Baroque buildings. The oldest and most popular monuments are found around the tomb of St James and the cathedral in the Plaza del Obradoiro area. Galicia has shied away from mainstream tourism and for this reason its beauty and charm are almost completely unspoilt.
The city is relatively small and you can get about quite adequately on foot. This is useful when there are so many fantastic wines to sample! The food and drink is amazing in Santiago de Compostela and Galicia in general and long happy days can be spent just wandering about the old stone streets. It is interesting to observe the pilgrims, resting their weary feet. The city is also an important Spanish University City and for this reason the nightlife here is also fairly respectable. 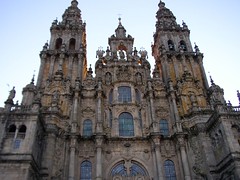 The city’s focal point is definitely its cathedral. This is the final destination of the “El camino de Santiago” and it is always bustling with content, if a little weary, pilgrims. A pilgrim’s mass is held here every day at midday and this is especially interesting if the “Botafumeiro” is being used. This is a massive incense burner that swings from the roof and was traditionally used like a cathedral air freshener to alleviate the smell of the pilgrims who could be understandably a little sweaty after their journeys. You should also visit the crypt where the remains of St James are believed to be kept in a silver urn. There is however a small charge to visit the crypt, cloister and treasury which are all housed inside the cathedral’s museum.
Other places worth exploring are the Hostal de los Reyes Católicos, Santiago University, Centro Gallego de Arte Contemporáneo and The Pilgrimage Museum. “Hostal de los Reyes Católicos” is now a private hotel and the city’s grandest place to stay, however it was originally a simple hospice built by Fernando and Isabella for the pilgrims to stay. Official viewing tours are available to explore within. The city’s university is also steeped in history. Probably the most eye-catching building is the Faculty of Geography and History, built in the 18th century. History and tradition are predominant in Santiago de Compostella and for this reason “Centro Gallego de Arte Contemporáneo” provides a welcome contrast, with its exhibitions of works by contemporary Galician artists. Entrance is free and, in addition to the art, the building and location are also superb. Finally, the Pilgrimage Museum is dedicated to the centuries of pilgrims who have journeyed to Santiago to pay tribute to St James and is adorned with all kinds of interesting artefacts and images along with detailed descriptions of the various pilgrimage routes.
Photo by freecat 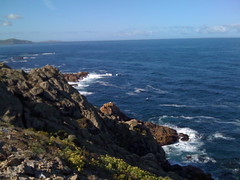 If you enjoy really good seafood then Galicia definitely is the place to visit. Its long coastline and estuaries are brimming with wonderful ingredients that are plucked and placed fresh on your plate. Galicia has always had a fishing economy and for this reason most of the classic Galician dishes are seafood based. “Pulpo a feira” is a classic Galician dish, prepared of octopus, shellfish, the ribeiro & albarino wines, empanadas and orujo liquor, also “Zamburiñas” (baby scallops) and “Necoras” (spider crabs.)
It’s not just all seafood though and there are many other treats to sample such as the Galician Soup “Caldo gallego” and an array of traditional rustic pies and stews. Galician food is generally simple and unfussy, but guaranteed to put a smile on your face. The wines don’t disappoint either. Galician wine is of a very high quality with the most notable local wines being whites such as Albariño and Ribeiro.
There are two main areas for going out, the old town and the new town. There are lots of bars and clubs in the old town and the new town is home to more tapa’s bars and restaurants. Good places to head are “Rua do Franco” and “Rua da Raiña,” both near to the cathedral square. There are countless bars and cafés here and always a good atmosphere. The students contribute to a lot of the atmosphere and there is also usually a good selection of talented street artists in and around Plaza del Obradoiro, Plaza de la Quintana and Plaza de Platerías.
Photo by joaoa

“El Camino de Santiago” (The Way of St James) is the pilgrimage to Santiago de Compostella that dates back to the middles ages when Christians first began making the religious pilgrimage to Santiago de Compostella from far and wide to pay their respects to the Apostle St James.
According to legend, the body of St James was taken after he was executed in AD44 to Santiago de Compostella from The Holy Land by his two disciples, Theodore and Athanasius, sailing in a stone boat. The boat came ashore at Padrón on the Galician coast and the disciples stayed on there to preach after burying St James in Santiago de Compostella. “Pedrón” means “Big stone” in Spanish and the place took its name because the disciples were said to have moored their boat to a big stone there. This legendary “Pedrón” is exhibited at the church of Santiago de Padrón. Padrón is also a popular passing place on the pilgrimage route.
The actual burial place of St James, the location of Santiago de Compostella, is said to have been discovered by a hermit following lights to a sacred place. “Campus Stellae” or “Compostela” is Latin for ‘guiding star’ and the actual burial location was some 17km inland from Padrón. “Santiago” is “St James” in Spanish. When battling the Moors attempting to reconquer their land, St James is said to have appeared to the Christian soldiers and for this reason he is also known as “Matamoros”, the Moor slayer. Originally a small chapel was built on the burial site of St James and this later developed into the grand cathedral that can still be seen today in all its glory. This is the final destination of the Christian pilgrims.
Photo by Jule_Berlin 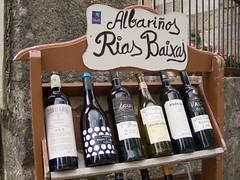 All wine lovers should definitely try Albariño wine when in Santiago de Compostela. Many people actually consider this to be Spain’s finest white wine. It is produced from the Albariño grape grown in the Rias Baixes part of Galicia in North Western Spain.
They are usually very aromatic wines and perfectly suited to accompanying seafood dishes due to their sharp acidity. Obviously this is ideal for Galicia with its strong tradition of wonderful seafood. They should really be drunk young. They are not wines that age particularly well as their aromas fade quickly after bottling.
A lot of the strong aromas come from the thick skins of the Albariño grapes. The Galician climate is cool and often quite harsh with an abundance of wind and rain. The grapes harden up accordingly. To allow the winds to dry out the grapes and to avoid rot, mildew and other fungal diseases Albariño vines are trained high and open.
Photo by Imamon