Oviedo is the capital city of Asturias and Asturias’ only major inland city. There is lots to see and do within Oviedo city and it is also in close proximity to the mountain ranges “Monte Naranco” and “Picos de Europa”.
Oviedo boasts a wealth of history and architecture in its beautiful old town. The focal point is definitely the cathedral “La Santa Basílica Catedral de San Salvador” located in the very heart of the city. It is a wonderful example of different architectural styles, from Prerromanesque to Baroque, to Romanesque, Gothic and Renaissance. Oviedo is a great place for pedestrians with many car-free zones and it offers fantastic bars, cafés, restaurants and shops. The locals are particularly proud of their famously hearty cuisine that includes such popular dishes as “Fabada” (bean stew with selected cuts of pork) and “Chorizo a la sidra” (Chorizo sausage prepared in cider). These are always washed down with lashings of the best cider in Spain.
Oviedo hosts the annual Prince of Asturias Awards. This prestigious event, held in the Campoamor Theatre, recognises international achievement in such categories as science, literature, sports and humanities. Notable winners including Bob Dylan, Al Gore, Woody Allen and Rafa Nadal. Oviedo is also the home town of the world champion formula one driver Fernando Alonso. 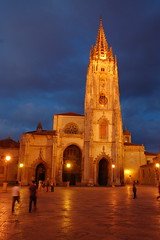 The old part of Oviedo is an excellent place to spend a day just wandering around taking in the atmosphere. It is almost completely pedestrianised and is all the more relaxing as a result. If you should feel a little weary at any stage you can always stop off in a cider bar to recharge your batteries. Most people start by visiting the city cathedral and in this area you can also find some of the most significant buildings in Oviedo: the church of San Tirso, the Fine Arts Museum, the Archaeological Museum and the convent of San Vicente. The Oviedo Archaeological Museum displays artefacts gathered from all over Asturias and illustrates beautifully the timeline of local art throughout the centuries. The innovative pre-Romanesque style of Asturias, a precursor to the Romanesque and Gothic styles, is a heritage unique to the province.
Other important buildings in Oviedo include Santa María del Naranco, San Miguel de Lillo and San Julián de los Prados, Santa Cristina de Lena, la Cámara Santa and la Foncalada, national monuments that have been awarded World Heritage status by UNESCO. The University of Oviedo is another prominent building of the historic old quarter and a vital element of the city.
Photo by cesarastudillo

Asturias is famous for its wondeful natural still “Sidra” (cider) that is available almost everywhere. The best place to enjoy the “Sidra” experience is in one of the “Sidrerias” which are bars devoted to the Asturian art of cider making, pouring and of course drinking. Some excellent “Sidrerias” can be found around the cathedral area of Oviedo.
A proper “Sidreria” will have a wooden floor and attentive waiters or waitresses who will pour your “Sidra” into your glass from a great height, with the glass angled towards the horizontal. Much of the “Sidra” is spilt in the process, but this is all part of the experience and helps fill the room with a wonderful smell of apples. The correct way to drink this beverage is in one gulp immediately after is has been dispensed in order to appreciate the full cider flavour. The cider is usually quite cheap and most people buy their cider by the litre to share between the group. The waiters and waitresses are also at hand to re-pour your glass, but it is also great fun to give it a go yourself.
Popular local foods include “Cabrales”, “Vidiago” or “Gamonedo” cheeses, “Asturian fabes” (haricot beans), “Pixin” (monk fish) and “Carne Gobernada” (stewed meat). It is also worthwhile sampling a typical Oviedo breakfast in one of the city’s “Churrerias”. These cafés specialise in serving hot doughnut like strips straight from the pan which are occasionally sprinkled with sugar and then dipped in a thick hot chocolate drink. And this is not just any old hot chocolate drink, it really is thick and extremely delicious!
Photo by Amadeus Serey Yáñez 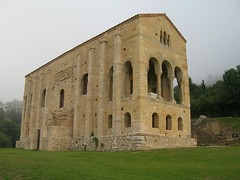 Archaeological evidence shows that the site of Oviedo has been inhabited since Roman times in the early first century. It was officially founded on November 25th 761 by the fourth Asturian King, Fruela I (King of Asturias from 757-768), who constructed a palace and a church in honour of Saint Vincent. With Alfonso II (King of Asturias from 791-842) Oviedo was established as a capital city, the court was moved from Pravia and a pilgrim’s route was defined to Santiago de Compostela in Galicia.
At about this time Oviedo saw much original and unique architectural expression, based on Visigothic, Roman and Nordic traditions. This reached its peak during the reign of Ramiro I (King of Asturias from 842-850). He sponsored many unique projects which remain to this day. The art and architecture Ramiro’s reign is labelled the “Ramirense” phase of Asturian art and can be seen in the palace and church of Santa María del Naranco and San Miguel de Lillo. His reign was turbulent and he had to fend off attacks from both the Vikings and Moors.
The medieval city and its walls developed significantly from the 12th to the 16th century and the important Los Pilares aqueduct works was constructed to provide the city’s water. At the beginning of the 17th century, The foundation of the Arts College (University of Oviedo) was opened and the population grew considerably. The 19th century saw industrial growth and the 20th century saw administrative and commercial development. One significant event of the Spanish Civil War was The Siege of Oviedo that lasted from July to October 1936 when the town army garrison rose in support of a coup d’etat.
Photo by FreeCat

Close to Oviedo, in the south east of Asturias, are “Los Picos de Europa”. This is a mountain range that stretches for about 40 km, covers almost 800 square km and exceeds an altitude of 2,500 metres above sea level. It is probably the main tourist draw to Asturias, attracting walkers, hikers, climbers, mountaineers and pot-holers of every level of expertise. Most visitors, however, simply wish to marvel at the beauty of this awesome mountain range.
The mountains are often capped with snow and the area is split into three groups: the “Western Massif” (or “El Cornion”), the “Central Massif” (or “Los Urrieles”) and the “Eastern Massif” (or “Andara”). All are clearly defined by cavernous valleys and deep rifts between them. If you are interested in some serious hiking then probably “El Cornion” is the most attractive prospect with the most varied scenery and most challenging climbs. It is the highest of the three massifs with its highest point being the “Pena Santa de Casilla” peak.
The importance of “Los Picos de Europa” was first recognised in 1918 when “El Cornion” was designated as Spain’s first National Park. By 1955 most of all three massifs were included within this designation. Above about 1,600 metres from sea level there is far less plant and animal life and the considerably cooler temperatures switch the dominant colours from green to white and grey. The plant life is replaced by hard limestone and snow, and fresh water is in short supply.
Photo by untipografico