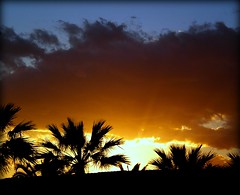 Murcia is located about 75 km south of Alicante and about 410 km south of Madrid. It hardly ever rains in Murcia and there is an average of over 300 sunny days a year, however temperature swings can be surprising despite Murcia’s close proximity to the coast. The summer heat is severe, but Murcia can also experience frosts in winter. The 20th century record high temperature for Spain was 47.2°C (117°F) in Murcia on July 4, 1994.

Murcia´s coastline boasts over 200 beaches and shares two different bodies of water: the Mediterranean and the Menor Sea. The Murcia region was first populated by the ancient Iberian tribes founding commercial factories on the coastal area. Intense commercial dealings were made with the Phoenicians and Greeks and ever since Murcia has always been strongly tied to seafaring activities and agriculture. When the Moors took over they introduced an large advanced system of irrigation that is still in place today and has made Murcia’s crops famous world wide.

Murcian gastronomy is excellent and draws not only on its world famous vegetables for stews, salads and rice dishes, but also the nearby coastline for some beautiful seafood delicacies. Murcia has also become a strong wine producer due to its fertile lands.
Photo by Dhanira

Murcia has an extremely interesting history and this is celebrated within many fine museums that include “Museo Arqueológico” and “Museo Salzillo”. The city was founded in 825 AD by Muslims and then taken by Alfonso X of Castilla and Léon in 1243. Murcia Industry has always been very successful and business really boomed in the 18th century, mainly due to silk and agricultural sectors. Everything slowed up, however, in the 19th century with the arrival of Napoleonic troops in 1810 and the subsequent outbreaks of the plague and cholera. The city also saw many of the devastating Spanish Civil War battles in the early 20th century.
Murcia is divided by the Segura River and is probably best known for its beautiful Baroque Cathedral, Almudi Palace, the Castle of Monteagudo, the Market de Veronicas, the Malecon Garden, the University of Murcia and the Museum Ramon Gaya. The Museum Ramon Gaya is dedicated to the Murcia artist of the same name. It is located in Casa Palarea in the Catalina Square and was inaugurated in 1990. It also includes a large variety of works of art from other artists.
Photo by A. www.viajar24h.com 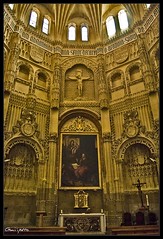 Anyone who visits Murcia really should take the time to see “Catedral de Santa Maria”. Completed in the 15th century, Murcia’s cathedral is the most impressive monument of Murcia. It is located in the “Plaza del Cardinal Belluga” and is a truly amazing building.
There are a number of different entrances to the cathedral – the main entrance (“Puerta del Perdon”), the north door, “Portada de las Cadenas” and “Portada de los Apostoles” and once inside you will marvel at the wonderful craftsmanship and the abundance of golden decoration. The cathedral museum is also well worth visiting.
Construction began on the cathedral in 1394 and it was finished in October 1467. However it continued to develop until the 18th century and for this reason is made of a variety of artistic styles. The interior is Gothic, the facade is Baroque and it was made by the Valencian architect and sculptor Jaume Bort i Meliá. The cathedral bell tower is the tallest bell tower in Spain. It was built between 1521 and 1791 and is an impressive 90 metres high.
Photo by Guijarro85 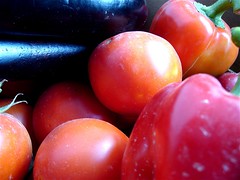 Murcia’s famous and fantastic vegetables dominate the local cuisine in the same way today as they have throughout the centuries, ever since the Romans first saw the agricultural potential in the Río Segura Valley. When combined with the fish and seafood delights of the nearby Mediterranean it is a sure fire recipe for tasty success.
The city is brimming with bars and restaurants that ooze character and charm and you will not find it difficult to sniff out some wonderful authentic Mediterranean dishes. Fish, vegetables and olive oil are the dominant aromas in the air and the base of Murcian cuisine, though the region is also well-known for its roasts, rice, sausages, preserved foods, nuts, aromatic plants, fruit and confectionery.
If you fancy trying your own hand at cooking some of the local dishes the best bet is to explore some of the surrounding villages, most of which have regular outdoor markets offering great opportunities to pick up the finest local ingredients at very reasonable prices. The locals will love it if you try to ask for some things in Spanish, however with the high number of expats living in the area they will probably also be able to speak at least a little English.
Photo by slow Spain
Ramón Gaya was born on October 10th, 1910 in Murcia and died on October 15th, 2005. He was a Spanish painter and writer and is hailed as one of the best contemporary Spanish artists. He is definitely one of Murcia’s most famous and cherished sons.
Murcia’s “Museo Ramón Gaya” is located in a beautiful town house called “Casa Palarea” in the Catalina Square and is dedicated to the artist, although it does include the works of many other famous artists. It was inaugurated in 1990 when the artist was 82 years old and displays sketches, posters, writings and an anthological selection of Gaya’s paintings.
Other works on show at the museum include paintings by Vazquez and Rembrandt who heavily influenced Gaya.