Madrid is the capital of Spain and the country’s largest city. It is located in the centre of Spain on the river “Manzanares” and is the political heart of the country, the seat of government and residence of the Spanish monarchy. It is also the major financial centre of the Iberian Peninsula, hosting the head offices of most of the big Spanish companies.
Madrid is a thriving modern city with a fantastic modern infrastructure, but it has also managed to retain the character and charm of its old streets and buildings. There is much to see and do in Madrid, but some of the key sights might be the Royal Palace, “Teatro Real” (Royal theatre), “Buen Retiro” park, the National Library and the Archaeological Museum.
One should also not forget Madrid’s wonderful art galleries. The most famous is “Museo del Prado” which hosts one of the finest collections of European art from the 12th Century to the 19th Century in the world and is located in “Paseo del Prado”. However there is also the modern art museum “Museo Nacional Centro de Arte Reina Sofía” and “Museo Thyssen Bornemisza” housed in the renovated Villahermosa Palace near to the Prado Museum. The three galleries have collectively become known as “The Golden Triangle of Art”. 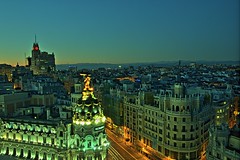 Christmas in Madrid is truly magical and and sees lengthy celebrations lasting until January 6th, “La Festividad de los Reyes Magos” (Three Kings Day). Kings Day celebrations start the day before when elaborate “Cabalgatas” (parades) fill the evening streets. Local people dressed as kings and their servants parade and throw sweets to the children in attendance. It is a wonderful family event and a highlight of every child’s year.

Madrid’s New Year celebrations are equally spectacular and the streets equally jam-packed. The main meeting point is “Puerta del Sol”. As the clock chimes out each of the twelve strokes of midnight twelve grapes are gobbled down in succession. It is a task that sounds easier than it actually is, especially if the only grapes left are the large ones full of pips. If you do manage to eat all of your twelve grapes before the final chime you are said to receive good luck in the coming year (after you get rid of your stomach ache).

“Fiesta de San Isidro” takes place on May 15th in honour of Madrid’s patron and is one of the most spectacular events in Madrid’s calendar. It is the scene of the year’s top bullfights, numerous musical concerts and all sorts of other interesting public performances. During July and August the town-hall organises a series of cultural events called “Veranos de la Villa” (Summer in the village, Madrid is also known as “The Village”). “Verbena de la Paloma” is an August festival that shows off the popular traditions of Madrid complete with regional costumes, music and dances. September is a big month for music in Madrid with the concert venues and theatres staging their finest performances. November sees Madrid’s International Jazz-Festival.
Photo by felipe_gabaldon
Eating and drinking is Madrid’s great passion and the cornerstone of the city. Every gastronomic delight imaginable from all around the world can be found in Madrid alongside the full range of Spanish cuisine, from the most traditional dishes to the most wild and wonderful modern cuisine.
Madrid’s cuisine has come to represent “Spanish” cuisine in general with the best dishes from all of the other provinces readily available. Traditional dishes that earn the title “Madrileño” are mainly meaty hot-pots such as the famous “Cocido Madrileño” which is a stew of meat, vegetables and chick-peas. Another well known regional dish is “Sopa de Ajo” (garlic soup).
These hot and hearty dishes are well suited to a region that experiences very cool winters with frequent snowfall. Due to Madrid’s high altitude and dry climate, temperatures at night tend to also be very cool, even in summer. Summer’s days in Madrid, however, are a different story and temperatures soar up to 40ºC with very little chance of rain. The rain that does fall in Madrid is usually seen in Autumn and Spring. With its location in the centre of Spain it is surprising that Madrid is also one of the best places to find fresh fish dishes. Behind Tokyo, it has the second biggest fish market in the world and there are numerous very high quality fish restaurants and fishmongers. 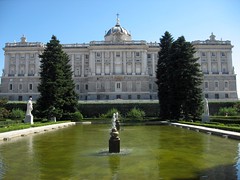 “Puerta del Sol” (Gate of the Sun) is located in the very heart of Madrid and is the setting for many of the city’s celebrations. Madrid’s main street “Calle Mayor” can be followed to “Plaza de la Villa”, a lovely square with numerous interesting buildings, including “Casa de la Villa”, “Casa Cisneros” and “Torre de Lujanes”. Behind this square is “Plaza Mayor”, possibly the most well known and impressive of all Madrid’s squares, with its prominent central statue of Philip III. It dates back to 1581, is rectangular in shape and measures 129 by 94 metres. “Palacio Real” (The Royal Palace) is the official residence of the Spanish monarchy and was built for the Bourbon family when they took over the Spanish crown. It is the largest royal palace in western Europe and is located in Bailén street.
“Paseo del Prado” is the location of the famous Prado Gallery and is lined with beautiful fountains of Cibeles, Apollo and Neptune, Botanical Gardens and the Astronomical Observatory. “Parque del Retiro” is located closeby and is one of the most beautiful parks in Madrid. It is not only the perfect place to take a stroll or relax by the lake, here you can also visit the wonderful Crystal and Velazquez Palaces. “Jardines del Descubrimiento” are beautiful gardens located at “Plaza de Colón” and well worth visiting.
Good places to explore medieval Madrid are “Barrio de la Morería”, “Plaza de la Paja”, “Plaza de San Andrés” and “Plaza de Cruz Verde”. Some particularly interesting buildings to explore include the church of “San Nicolás de los Servitas”, the tower of “San Pedro el Viejo” and finally “Casa de los Lujanes”. More modern buildings of interest include the Fish Market of “Puerta de Toledo”, the Train Station of Atocha, the Windsor-Tower, the “Torre Picasso”, “Edificio Sollube” and “Torre Europa”.
Photo by Gonzopowers
The site of modern-day Madrid has been occupied since pre-historic times. The Romans established a village on the banks of the “Manzanares” river called “Matrice”. The Roman Empire in the Iberian Peninsula was eventually overrun by the invading Visigoths during the 5th Century AD and they seized control of “Matrice”. The next major change came in the 7th century with the Islamic conquest of the Iberian Peninsula. “Matrice” was altered to “Mayrit”, derived from the Arabic word “Mayra”.
The origins of modern Madrid city date back to the 9th century when Muhammad I constructed a small palace on the same spot as today’s “Palacio Real”. A citadel was built around the palace called “Al-Mudaina”. This citadel was conquered in 1085 by Alfonso VI, the Christian king and he replaced the mosque with the church of the Virgin of Almudena. Jews and Moors continued to live in the city until they were expelled at the end of the 15th century.
Toledo was the capital of the Kingdom of Castile and Zaragoza the capital of the Kingdom of Aragon. In 1479 Queen Isabella of Castille and King Ferdinand II of Aragon merged the two crowns and created what would become the Kingdom of Spain. Seville was also a very important city, but when the Spanish court moved to Madrid in 1561, though it was not official, Madrid became recognised as the capital city.
The Spanish Blog