León is the capital of the León province in Castile and León, northwest Spain. León was founded in the 1st century BC by the Romans. Its name is derived from the city’s Latin name “Legio VII Gemina”, from the Roman legion which established the site of the city to protect the territory from the Astures and Cantabrians and to secure the transport of gold extracted in the province.
León is famous for its Gothic masterpiece Cathedral “Santa María de León”, dedicated to “Santa María de la Regla”, and numerous other historical buildings, that include “Real Colegiata de San Isidoro” (which holds the Royal Pantheon, a mausoleum in which medieval Kingdom of León’s royal family were buried, and also has one of the world’s best collections of Romanesque paintings), “Casa de Botines” (an early work of famous Spanish architect Antoni Gaudí), “San Marcos” (originally the Military Order of Santiago’s home, built in the 16th century) and the Castile and León Museum of Contemporary Art (MUSAC).
The MUSAC building is celebrated for its avant-garde architecture, and has been awarded a number of prizes, such as the 2007 European Union Prize for Contemporary Architecture (Mies van der Rohe award). Designed by the architectural studio of Luis M. Mansilla and Emilio Tuñón, the inspiration for the multicoloured panels that adorn the exterior of the museum was drawn from the main rose stained glass window of the local cathedral. MUSAC has become a landmark for the city of León and an emblem of modern 21st century Spanish architecture.
Photo by widemos
León has been a city of significant importance since Roman times. It fended off attacks from the Visigoths until 586 AD when it was taken by Visogoth King Leovigild. The Visogoths were an Eastern Germanic tribe that played a prominent role in Spanish history and were a real headache for the late Roman Empire. They first emerged as a distinct people during the fourth century, initially in the Balkans, where they participated in several wars with Rome.
Muslim invaders followed and it was not until 856 AD that Christian King Ordoño I brought a Christian order to León. Alfonso III of León and García I of León made the city the capital of the Kingdom of León and the most important of the Christian cities in Iberia. The Kingdom of León officially started as an independent Kingdom in 910 AD, becoming an Empire that reached the Rhone river in the XII century. León was a way-station for pilgrims on the Camino de Santiago leading to Santiago de Compostela. With Alfonso V of León the city had the “Fueru de Llión”, an important letter of privileges.
In the 16th century, economic and demographic decline set in and continued until the 19th century. In July 1936, during the Spanish Civil War, León joined the war against the Republicans. In 1983 León was added to the neighbouring region of Castile, to form the Autonomous Community of Castile and León. A significant proportion of Leonese people support the idea of creating a Léonese autonomous community formed by the provinces of Salamanca, León and Zamora, which have traditionally composed the Leonese Region. 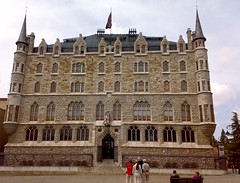 León has an impressive array of old monuments dating back to medieval times that stand alongside equally impressive avant-garde modern buildings. If you are interested in architectural history you will certainly not be bored in León.
The most notable monuments are the gothic “Rayonnant” Cathedral, with its famous stained glass windows, the “Basilica de San Isidoro”, with its tombs of the Kings of León and wonderful Romanesque paintings, and the old monastery of San Marcos. Much evidence of Roman occupation and a large proportion of the old medieval wall can still be seen in the city’s old quarter. “Palacio de los Guzmanes” is the site of the provincial parliament and contains an impressive patio by Gil de Hontañón and “Casa de Botines” is a neogothic styled building and an excellent example of the architecture of Antoni Gaudí.
The avant-garde MUSAC (León’s contemporary art museum) is a definite landmark of the city with its bold façade of thousands of large multi-colored stained-glass panels. Nearby is the León Auditorium, also by Mansilla and Tuñón, which is equally striking with its white cubes and irregularly set windows. Other places of interest include the the “Universidad de León” and the “Plaza del Grano”.
Photo by ♣ ℓ u m i è r e ♣
The Leonese Language derives directly from Latin and dates back to the early Middle Ages. It was the official language of the Leonese Kingdom and was spoken in the territory of the Spanish provinces of León, Zamora, and Salamanca and in some villages in the District of Bragança, Portugal. It belongs to the Leonese or Astur-Leonese subgroup of Iberian languages and is close to Mirandese spoken in north eastern Portugal and Asturian Bable. Today Leonese is rarely heard and is recognised as a seriously endangered language by UNESCO (The United Nations Educational, Scientific and Cultural Organisation). However there are efforts for it to gain wider acceptance and campaigns for its teaching.
In 2001 the University of León created a course for Teachers of the Leonese language, and Local and Provincial Governments developed Leonese language courses for adults. Now the Leonese language can be studied in most important villages of Leon, Zamora and Salamanca. The Leonese Language Teachers and Monitors Association was created in 2008 for the promotion of Leonese language activities. Leonese language classes started in 2008 and were taught in sixteen schools in León city from 2008-2009, promoted by the Leonese Local Government’s Department for Education.
The Province of León government supports the knowledge of this language by celebrating regular “Leonese Language Days” and by sponsoring literary efforts in the Leonese Language. 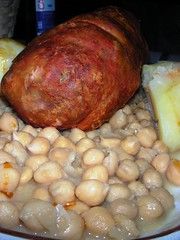 Leonese cuisine is a title that encompasses an extremely broad range of different dishes. There are clear influences from neighbouring Asturias and Galicia and top class ingredients are at hand in all directions, from the sea and from the land.
“Cecina” (high quality cured meat) is a typical León favourite and the local beef is fantastic. Sausages are popular, along with “El Botillo” (meat-stuffed pork intestine), tripe, liver and lungs in black sauce, heart stew, hare with beans, lamb with potatoes and “Morcilla” (black pudding). The cheeses are also wonderful, such as “Armada” cheese and “Valdeón” blue cheese. Other dishes worth a try include the local garlic soup, the dessert “Mantecadas” and “El Cocido Maragato” (a meat stew with vegetables and chickpeas). “El Cocido Maragato” is peculiar because the meats are served first. This is a tradition that remembers the way that Spanish troops used to eat their stews during wartime, eating the best bit first in case they were called away and didn’t have time to finish the meal.
The tapas scene in León is a vital element of the city and, unlike most of the Spanish cities now, many bars give their tapas away free when you purchase a drink. León is a great place to “Tapear” – this is a lovely verb that describes the activity of rambling from one bar to another taking a tapa and a small beer or wine in each just before lunch or as a light dinner.
Photo by jlastras
The Spanish Blog