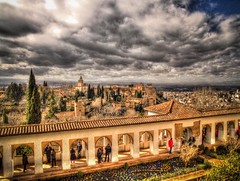 Granada is located in south east Spain and is the capital city of the province of the same name. The city is located at the foot of Sierra Nevada, the highest mountain range of the Iberian Peninsula. It offers the opportunity to enjoy both fantastic ski slopes and sun drenched beaches of the nearby southern Mediterranean coast. It really is a city that offers something for everyone – culture and history, sports and activities, art and events and wonderful food and drink.
Granada is one of Spain’s most important cities culturally and architecturally. It has more than a thousand years of recorded history and its Moorish influences are blatant. The most famous of all of Granada’s draws is definitely the Alhambra, but the historical (and also UNESCO World Heritage designated) Moorish Albaicín part of the city is also a must-see. Its intricate weaving streets, white buildings, cave shops and tea rooms are a beauty to behold and once inside you can easily while away a day simple wandering about soaking up the atmosphere.
The city buzzes with life and artistic activity. Big festivals adorn almost every month of the year. These include The International Music and Dance Festival, the Jazz Festival, the Magic Festival and the Tango Festival. This is not forgetting your usual Spanish fiestas and Granada does these as well as anyone. The streets are alive in summer with fun and festivities, but beware, it will be hot!
Photo by hitchhicker
Granada is a University City and has a very youthful feel to it. Tourism and the University are the two main driving forces behind Granada’s economy. It is one of the most popular cities chosen by foreign students to learn Spanish. There is a fantastic student scene and the bars and nightclubs are always jammed to the rafters. Granada is ranked alongside Salamanca and Santiago de Compostela as one of the three best cities in Spain for college students.

The University of Granada is extremely prestigious, steeped in tradition and offers a huge diversity of services. Due to the constant stream of foreign students, Granada has become a city that really makes the most of Language Tourism. Granada is also one of the more multi-cultural cities in Spain and there is a very interesting juxtaposition of cultures. Interestingly it is also the opposite of most cities in that in the holidays are much quieter than other times because the students go home and many other seek refuge on the beaches one hour to the south.

There are two main zones for the bars. Pedro Alarcón is generally attractive to a younger crowd (18-25s) and the bars around Plaza Nueva and the Calle Elvira are usually a bit older. 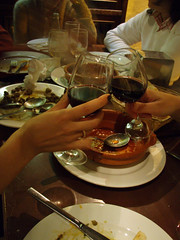 The gastronomy of Granada is rich and diverse and could on its own serve as a good enough reason to visit the city. You can attribute the quality of the gastronomy to both Granada’s fortunate location and its rich cultural history. Fantastic fresh products are easily at hand and the Granadainos are highly adept at converting these into exquisite and hearty dishes. Arab influences in the use of certain spices are prevalent in many of the typical dishes, especially the desserts.
Granada has a huge number of restaurants and tapas bars where you can sample such delights as migas, remojón, habas con jamón (beans and ham) and gazpacho. Among the most famous dishes here are “Papas a lo pobre” and the tortilla “Sacromonte”, a mixed vegetable omelette. The most famous Tapas areas are: Albaicín, Campo del Príncipe, Realejo, Plaza de Toros y Zona Centro. The tradition of giving free tapas with drinks in bars is still going strong here even though it’s dying out elsewhere in Spain. In fact, bars in Granada compete to win customers by seeing who can offer the biggest and best tapas.
It is said that Granada has more bars per inhabitant and square kilometre than any other city in Spain and absolutely everyone goes out to eat and drink regularly. The cost of living is comparatively low and eating and drinking out is very well priced indeed. Moreover the flavours will blow you away because everything is so fresh. A huge amount of produce is grown locally in the sun-drenched fields and it’s picked ripe because it doesn’t have to travel far.
Photo by daquellamanera 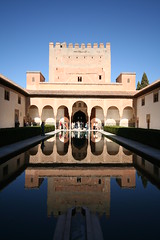 Granada is probably best known for The Alhambra, a massive palace constructed over centuries and considered by many to one of the ten wonders of the world. It draws tourists from all corners of the globe and definitely doesn’t disappoint. It was the home of a large number of the Arabic Sultans who ruled the province and as such had to look the part. Its architecture, interior decoration and lush gardens are fit for any king.
The Alhambra is actually Spain’s most visited monument and a must-see if you are in Andalusia, but if you are interested in history and culture you don’t have to stop at the Alhambra. Granada also has a wonderful Cathedral, a Royal Chapel, the Monastery of la Cartuja, the Monastery of San Jerónimo, the Science Park Museum and many museums and gardens.
The city of Granada was founded by the Romans, but was given its current name and much of its current style after the invasion of the Iberian Peninsula by the Muslims in the 8th century B. C. In 1492 the city was conquered by Catholic Monarchs finishing the Christian re-conquest.
Photo by clspeace
Probably the most famous Granadaino is poet and dramatist Federico García Lorca. Lorca was born in 1898, the year of the Spanish-American War, in the Andalusian countryside just outside of Granada. When he was eleven in 1909, his parents moved Lorca, his brother and two sisters into Granada city. He is one of the 20th century’s most brilliant and innovative poets and also the most translated Spanish author ever.
Loraca also lived for quite a while in Madrid and traveled extensively, but he returned regularly to the Andalusian countryside and wrote most of his important work there. On the subject of his rural upbringing he said: “I love the land. I feel tied to it in all my emotions. My most distant childhood memories have the flavor of the earth. The earth, the fields, have wrought great things in my life. The bugs of the earth, animals, country folk are suggestive to only a few people. I capture them now with the same spirit I did during the years of my childhood.” In his poems and plays, Lorca shows himself a careful observer of the speech, music and customs of rural society.
In 1936, at the start of the bloody Spanish civil war, Lorca was taken to a village near to Granada and shot by a firing squad. When General Franco launched his overthrow of the Republican Government Andalucia was the first region to fall and Lorca was one of the 30,000 inhabitants of Granada to pay with their lives for supporting Spain’s democracy and attempting to break the stronghold of the Church.